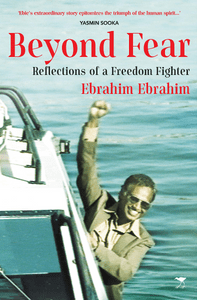 “Ebie’s extraordinary story epitomizes the triumph of the human spirit, and his transcendence from torture to a state ‘beyond fear’.” Yasmin Sooka, leading human rights lawyer, and former Executive Director of the Foundation for Human Rights.

Beyond fear is the testimony of a revolutionary amongst revolutionaries, Ebrahim Ebrahim’s poignant and inspirational account of his years spent dedicated to bringing down the apartheid state. As one of the founding members of Umkhonto we Sizwe, he played a central role in directing the sabotage campaign of the 1960s. Convicted for this, Ebrahim arrived on Robben Island in 1964, some months before Nelson Mandela, where for over 15 years he played a leadership role in the creation of the ‘University of Robben Island’, a university of revolutionary ideology. After Ebrahim’s release in 1979 he operated in the ANC’s Natal underground structures.

He disappeared into exile in 1980 on the instructions of Oliver Tambo as he was about to be arrested. As the head of the ANC’s political military committee in Swaziland, Ebie’s life was under constant threat. He was infiltrated into South Africa in 1985, to report on the state of resistance in the country. Identified by an agent, one of the most extensive manhunts of the apartheid era ensued. He escaped to Swaziland only to be abducted in December 1986 by apartheid agents and taken to South Africa to be tortured at John Vorster Square. He was charged with treason and was sentenced to 20 years, which would be his second stint on the island. Ebie was released in February 1991.

Beyond fear tells the story of his post-1994 life, where he travelled the world on international conflict resolution work. He later served as South Africa’s deputy minister of Foreign Affairs. His great love story began at the age of 63 to his beloved Shannon Ebrahim with whom he had two children who were, as he says, his “greatest teachers”. Ebrahim Ebrahim died on 6 December 2021.