Benedikt Dreyer was a Late-Gothic woodcarver (Bildschnitzer) and sculptor who worked and lived in Lübeck during the first half of the 16th century. It was a time of radical change. The Renaissance, Erasmian Humanism and diverse Reformation movements transformed European society in every possible way. The ecclesial landscape changed irrevocably. It was a tension-filled time, aggravated by religious wars and epidemics. This contribution examines the life and work of Benedikt Dreyer in the context of the 16th-century Reformation and the effect the Reformation had on art production.

The early artworks of Benedikt Dreyer reflect the ecclesial situation and theology of the pre-Reformation era. This is clear from the subject matter, in the sense that Dreyer produced art which included apocryphal legends and objects for use in Roman Catholic liturgy. His later artworks reflect Lutheran principles in terms of liturgy and content, with a strong focus on Biblical narratives and the centrality of Christ, which is typical of Lutheran theology. Dreyer’s art not only reflects the context and theology of the time, but also a deep, personal spirituality. The artworks which are on permanent exhibition in the St Annen Museum in Lübeck reveal the exquisite detail, craftsmanship, artistry, emotional depth and spirituality of Dreyer’s art. Photos of some of these artworks are included in this contribution.

Critics differ as to which artworks could be regarded as authentic Dreyer works. The different opinions revolve around the questions of dating as well as the possible influence of southern artists like Riemenschneider. It was common practice for young artists to travel and study with masters in other areas. The research of Thiesen (2007) answered many of these questions. Her detailed analysis of Dreyer’s technique and style as she compared them with those of someone like Riemenschneider indicates some influence from the south. Thiesen’s research is not repeated here. Rather, the focus of this contribution is on Dreyer’s biographical details, about which there is also a difference of opinion.

At the beginning of the 16th century many artisans established themselves in Lübeck. Goldsmiths, silversmiths, painters, sculptors, woodworkers and many others practised their art in the city. Many of them had workshops in the area of the Horse Market. Many of these artworks are still to be seen in churches, public buildings and museums in countries such as Germany, the Netherlands, Russia, Denmark, Sweden, Finland and Estonia. For some time, Lübeck had been the centre of the so-called Northern Renaissance, which had developed in the wake of Humanism, new scientific discoveries as well as socio-political changes, like early forms of democracy and capitalism. Influential figures of the Northern Renaissance were Desiderius Erasmus, Albrecht Dürer and Gutenberg. Before the 16th century the Italian Renaissance had little influence north of the Alps. Northern art and science developed independently of the south. The Northern Renaissance was also linked to the Protestant Reformation. Many of the Reformation leaders were infused with the ideals of Erasmian Humanism and learning. At the beginning of the 16th century the Italian Renaissance became more influential in the southern parts of Germany, but to the north (Lübeck) the influence remained limited. As a result, art production in the first half of the 16th century maintained the Late-Gothic style. This disappeared only after the Reformation, because during the Reformation the demand for art, especially in churches, declined dramatically.

Benedikt Dreyer’s life is described in the context of the 16th-century Reformation. By 1530, the Reformation had spread through the northern parts of Germany and Scandinavia. It is a well-known fact that the Lutheran and Calvinistic movements had a negative impact on art production. The Reformation was a movement of education and books, telling the Bible stories through the medium of words and print and not through visual images and art. As a consequence, many artists lost their means of earning a living and they either left Lübeck or changed their profession. The large number of properties sold by artists during this period attests to this fact. However, this did not happen to Benedikt Dreyer. He was appointed by the Lutheran leadership to an official position with the responsibility to maintain the art in the Marienkirche (Church of Mary) in Lübeck, as well as to build and decorate the new Reformed pulpit.

Sources put Benedikt Dreyer’s date of birth around 1480, probably in Lübeck. His father and mother were in all probability Hans and Cillye Dreyer. We know he had at least two brothers (Jurgen and Hans) and a sister (Gretke). The three brothers were all artists, doing wood carving, sculpting and painting. It is reasonable to assume that the father also earned a living as a woodcarver, because the general practice of the time was that artisans transferred their knowledge, skills and business to their sons. If that was the case, Benedikt would have started his training as a woodcarver with his father at an early age. It was also common practice for young artists to travel and visit other artists and workshops. Research points to the fact that Benedikt Dreyer left Lübeck in 1502 for Lüneburg, approximately 90 kilometres south of Lübeck, to further his training as an artist. He left for the Lüneburg Gesellschaft in the company of Hans Witte, a friend from Lübeck. In 1505 he was promoted to Ghesellen Schaffer, which meant that he had the status of Meister (master craftsman) responsible for the training of young artisans. In the autumn of 1507 he continued his journey to the southern regions of Germany, where he would have experienced something of the growing influence of the Italian Renaissance. Thiesen’s research points to an extended stay in the vicinity of Ulm and Schwabe, as well as a visit to the workshop of Tilman Riemenschneider in Würzburg. This conclusion is based on a comparative analysis of technique and design. Thiesen is convinced that Dreyer worked with Riemenschneider, because of similarities in their technique and design. This sojourn in southern Germany lasted approximately three years. By 1510 Dreyer had returned to Lübeck, where he was allowed to open his workshop as a master craftsman.

Shortly after 1510, Benedikt Dreyer married Taleke van dem Kroghe, the daughter of a well-to-do artist who owned two houses in the Horse Market area (no. 5 and no. 7 Pferdemarkt) where most of the artists lived and worked. Benedikt and Taleke Dreyer lived in the Pferdemarkt properties until 1535, when Dreyer bought his own house in Hundestrasse. The fact that he could buy his own house in that period is quite remarkable. It was a time when many artists found it difficult to survive and had to sell their properties because of the negative effect of the Reformation on art production. The relatively good position in which Dreyer found himself, despite the negative impact of the Reformation, is confirmed by his appointment as Kirchenmaler (official church artist) to the Marienkirche in 1538. By this time the Lutheran Reformation was well established in Lübeck, under the influence and guidance of the well-known friend and confidant of Luther, Johannes Bugenhagen. This leads to the assumption that Dreyer supported the Reformation movement, otherwise the Lutheran church authorities would not have appointed him to an official position in the church. He also received the appointment to build and decorate the new pulpit in the Marienkirche. The financial registers of the Marienkirche (dated 1540) also reflect payments to Dreyer. The use of Netherdutch instead of Latin in the church registers is also interesting. It points to the emphasis the Reformation placed on the use of local languages and the opposition to Latin as the official language. The register also mentions that Benedikt Dreyer had delivered artworks to the church. In the Netherdutch it says that the “Beldesnider Benedictus Dreyer” delivered artworks “vor dat Münster”.

There is no record of the effect the 1517 or 1528 outbreak of the sweat sickness epidemic in Lübeck (and the rest of Europe) had on the Dreyer family, although it is possible that some family members could have succumbed to the epidemic. Benedikt and Taleke Dreyer probably had three sons, one of whom (Christopher) had been involved with the selling of the house in Hundestrasse in 1555. It was also the year in which Benedikt died. Benedikt is in all probability the progenitor of the Dreyer family in South Africa, as genealogical research has traced the family roots back to 16th-century Lübeck.

The question could be asked why it is important to investigate the life and work of a relatively unknown artist such as Benedikt Dreyer. There are several reasons for this. The first reason is the growing interest in the role of art during the Reformation, as reflected in recent and upcoming international conferences on the topic. The second reason is the growing interest in a “history from beneath”, where the emphasis is placed on the role of common people rather than on the role of famous and well-known leaders in church and society. The stories of common people, those on the margins of society, are becoming more important. The reason for this is not merely to find some alternative research objects, but because it deepens our understanding of historical events. The history of the Reformation has been written so often by competent scholars that it becomes a question of what could be added to the already existing body of knowledge. One way of adding knowledge and deepening our understanding of the past is by telling the untold stories. This in itself is a very difficult and complicated enterprise, due to the limited sources available. It requires a multidisciplinary approach that makes use of resources from various fields. In this contribution art history, church history, cultural history, political history and genealogical research were integrated to tell the story of a relatively unknown artist who lived and worked in a context of socio-political and ecclesial transformation in the midst of wars and epidemics. Thirdly, Benedikt Dreyer is a character of interest in the genealogical research on South African families. 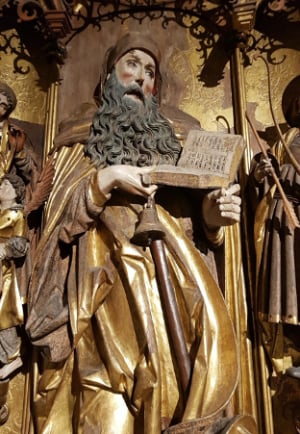 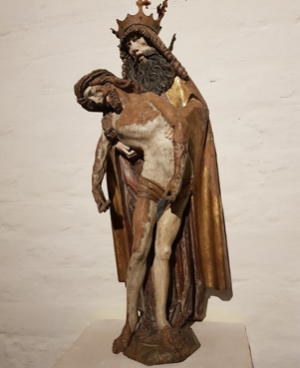 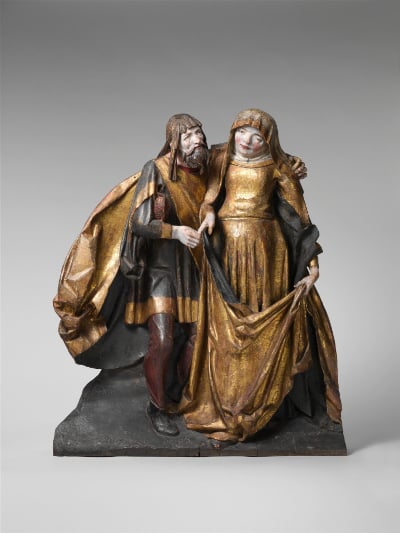 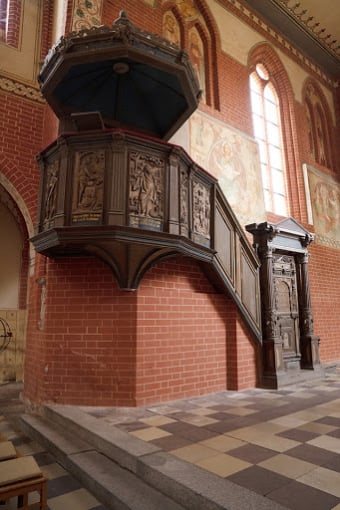 Becker-Cantario, B. 1988. Low German as a literary language in Schleswig-Holstein in the seventeenth century: A poem by Anna Ovena Hoyers. In Jazayery (red.) 1988.