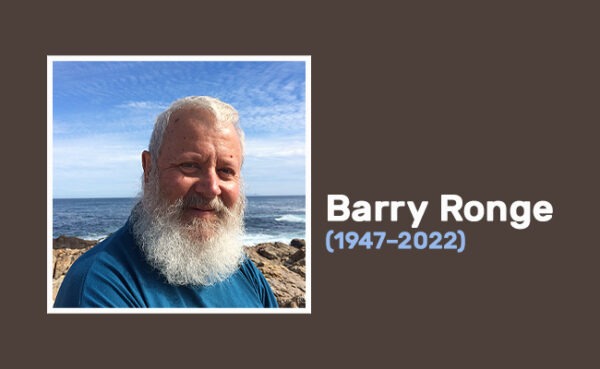 When I started reviewing movies for Mail & Guardian in the late 1990s, I was highly aware of the senior figures working in that space. There was the late Peter Feldman (writing for The Star Tonight), Philip Altbeker (Business Day) and Barry Ronge (The Sunday Times). They were all writers against whom I measured my own writing of reviews, but Ronge was the most prominent: he was, you might say, the doyen.

Ronge, who has died aged 74, was a constant presence in the reading life of anyone interested in the arts – and had been so for decades. Not only did he review movies for The Sunday Times, then a paper with one of the highest circulations in South Africa, but he had a TV show also dealing with film, his long-running column in The Sunday Times Magazine, “Spit & polish”, as well as a show on Radio 702 that frequently covered the arts. “Spit & polish” (a selection of columns from which some were published as a book) frequently touched social issues, but he always did this with a light touch. He was not a writer who sought to belabour readers with his views, but rather to seduce them.

He was not a writer who sought to belabour readers with his views, but rather to seduce them.

He was also a key figure in the Sunday Times Literary Awards, the ceremony of which he MC’d with his usual flair. As M&G books editor, I had attended the awards from the start, and it was then that I first encountered Ronge’s charm and eloquence. The Fiction Award, of the prizes given by The Sunday Times, was named for Ronge for many years, just as the Non-Fiction Award was named for Alan Paton. He seemed ubiquitous.

But he was never intimidating. He welcomed new reviewers to the club of movie critics with generosity and humour, and was open to discussion of one’s divergent opinions if they came up. I recall thinking, at that time, that his tastes as a reviewer were rather too mainstream for me, and I believe he indicated, doubtless with a little chuckle, that mine were possibly rather too arty and highfalutin for him.

But we got on well, and the group of film reviewers who gathered during my 15 years as a film critic (about half of Barry’s tenure!) were always pleasant company. Screenings were held at the distributors’ offices or at designated cinemas, but it felt like it was Barry who was the host.

I commented, at one point, on his habit of sitting in the very front row in the preview cinema at Ster-Kinekor, or one or two back in the bigger theatres, whereas I (and Feldman) liked to sit as far back as possible. I felt like I needed to be a critical distance from the movie if I were to review it properly, but he – he said – was happy to get up close to the screen and be immersed in and swept away by the movie. I think that says something about his passion for the subject.

Ronge was born in Hillbrow, Johannesburg, in 1947. He attended Florida Park High School on the West Rand and studied at the University of the Witwatersrand, where he later became a lecturer in English, after a stint at St John’s College. When his death was announced on Facebook, an extraordinary number of commentators remembered his lecturing at Wits and paid tribute to him as one whose lectures they still remember with fondness all these decades later. He clearly had a significant impact on those he taught, and probably fostered a love of language and literature in ways that other more austere teachers did not.

His own love of the language, and what it could do, extended from his reviews and columns to an ability to perform in front of the cameras or the radio mike, to speak in well-formed sentences and to make sometimes complex issues easily accessible to all.

His own love of the language, and what it could do, extended from his reviews and columns to an ability to perform in front of the cameras or the radio mike, to speak in well-formed sentences and to make sometimes complex issues easily accessible to all. His movie shows (Front row, Cinemagic and Screenplay) were presented with the same flair. People who worked with him on such shows have commented on his ability to get things right on the first take; he could utter those well-formed sentences extemporaneously, without a flaw, and if something went wrong during the filming, he could do a second take that very closely reproduced the first. So, apart from his literary and critical abilities, he was also a consummate performer in that context.

Ronge was also, remarkably, the first male reporter to write for the “Women’s page” of The Star, and he was the founding editor of that paper’s entertainment supplement, “Tonight”. Years later, he returned to “Tonight” for a short stint as editor, but it did not work out and he was back at The Sunday Times soon enough, where his readers welcomed him back with enthusiasm – and kept reading him for decades more.

A statement from Buz Publicity said that Ronge had died on Sunday 3 July of natural causes (and that, at his request, the news of his death was not made public for a week). His partner of 45 years, Albertus van Dyk, was with him when he died. Van Dyk, who had worked as an astrological columnist and radio producer, cared for Ronge in the last years of his life, just as he had been a huge support for the previous decades. The last time I saw them, appropriately enough at Cinema Nouveau in Rosebank, Johannesburg, was after Ronge had retired from his multifarious writing and presenting activities, but there was no expression of loss or regret, and the couple were as friendly and cheery as ever.

“He was an extraordinary talent, and I so miss him,” said Jenny Crwys-Williams, for many years a 702 presenter alongside Ronge. “He was kind, unbelievably witty, funny and a deep depository of knowledge,” said the station’s Africa Melane. He was “a gifted storyteller who could keep one spellbound for hours”, said Doreen Morris, his co-anchor on arts show Revue plus.

SABC3’s Pat van Heerden told Channel24: “He was a true cinephile, and his way of speaking about the movies he loved invited people into the joy of cinema. He supported local filmmakers and shared his knowledge about the international movie world. His supportive and critical role in the industry will be sorely missed.”

Ronge’s many thousands of readers miss him, too.