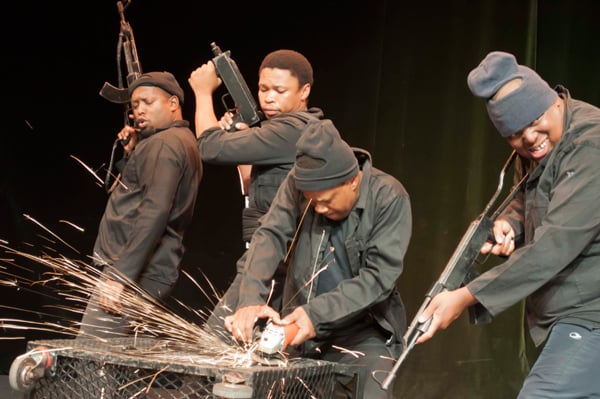 Aubrey Sekhabi’s high-octane, gripping thriller Silent Voice, featuring a stellar cast, will have audiences riveted to their seats this October.

Straight from its success at the 2014 Edinburgh Assembly Fringe Festival, Aubrey Sekhabi’s high- octane, action-packed thriller Silent Voice comes to the Baxter Golden Arrow Studio for a short season from 13 October to 1 November at 8.15pm nightly with a matinee on 18 October at 2pm.

Nominated for five Naledi Awards earlier this year (Best Production of a Play, Best Director, Best Ensemble/Cutting Edge, Best Score/Arrangement/Adaptation and Best Lighting Design), the play has been performed to great acclaim at the South African State Theatre, the Market Theatre and most recently the Edinburgh Assembly Fringe Festival.

The production received a five-star accolade from the British Theatre Guide, which described it as “a deceptively clever theatrical piece” and said, “It is a gripping story of four men on the run after a botched robbery that turns into murder, with some meaningful and realistic commentary about life in modern-day South Africa. As their plans begin to unravel, the audience is brought into the midst of the action as they become pawns in a high-stakes fight for survival.”

Sunday Independent described it as “utterly compelling viewing”, Mail and Guardian agreed, calling it “a gripping work” and The Citizen simply said, “thrilling”.

Affectionately known as the Quentin Tarantino of township theatre Aubrey Sekhabi is the artistic director of the State Theatre in Pretoria and is widely regarded as one of South Africa’s highly respected and dynamic theatre-makers. In 2006 he directed the highly successful return to the stage of John Kani and Winston Ntshona in Sizwe Banzi is Dead at the Baxter Theatre. Despite his prolific and award-winning career, this is the first time in many years that one of his own plays will be staged and performed in Cape Town. Other productions which he was responsible for include Rivonia Trial and most recently he adapted and directed Marikana – The Musical.

“The characters in Silent Voice affirm that dreams built on broken morals become broken dreams,” says Sekhabi. “Violence breeds violence. Often it seems so far removed from us because we only read about it or see it on the news. Each time I go back to this play I try to get into the hearts and the silent thoughts of the characters so as to somehow understand their actions.”

With the ever-increasing rise in crime of this nature in South Africa and especially in the Western Cape in recent months, this production is now more relevant than ever before. Dealing with trust, betrayal, money, sacrifice and love, Silent Voice exposes not only the two sides of the characters in the drama, but also the spiralling of the emotional and social rollercoaster ride they will all take. This sometimes shocking, sometimes hard-core exposé of events affecting all of us in South Africa today will have audiences riveted to their seats as it examines the relationship between man and his dreams to obtain wealth at all costs, with no thought for the future.

Silent Voice previews at the Baxter Golden Arrow Studio on 13 and 14 October, opens on 15 October at 8.15pm, with a matinee on 18 October at 2pm and runs until 1 November. Ticket prices are R80 (previews and matinee), R90 (Monday to Thursday) and R100 over weekends.

There is an age restriction of 14 years due to language and violence. Booking is through Computicket on 0861 915 8000, online at www.computicketcom or at any Shoprite Checkers outlet.

For discounted school or group block bookings, fundraisers or charities contact Sharon Ward on 021 680 3962 or email sharon.ward@uct.ac.za or Carmen Kearns on 021 680 3993 or email her at carmen.kearns@uct.ac.za.

Biography: Aubrey Sekhabi, writer and director
In 1994 Aubrey Sekhabi was appointed as the Artistic Director of North West Arts Drama Company. He was 24 years old at the time. During his eight years’ stint in the North West Province, he produced more than 30 productions and developed a lot of artists who have graced our theatres, small and big screens. In 2002 Aubrey took up the position of Artistic Director of the State Theatre in Pretoria, where he established the development department and went on to produce many productions and make the theatre more accessible to the previously disadvantaged artists and audiences alike.

He also directed the live DVD recording of musician Ringo at the State Theatre, the National Orders Awards, Mother of Rain, Sizwe Banzi is Dead starring John Kani and Winston Ntshona, the finale of the FIFA World Cup final draw and the Thank You Africa Concert in Dakar in 2010.

His television credits includes the SABC 2 detective series Orlando, the adaptation of Keeping up Appearances to a local comedy series called Mponeng, and a 52-part medical series called Hillside, which was broadcast on SABC 2.

Sekhabi’s 1994 play Mika won him the FNB Vita Award for Most Original Production and in 1988 he received the Standard Bank Young Artist Award for Drama. In 2012 he won the Naledi Award for Best Director and Best South African play/musical with the production of Rivonia Trial.

Sekhabi has served on the North West Provincial Arts and Culture Council and the council of the National English and Literary Museum. He is also the founder member and president of GBR productions (Pty) Ltd and serves on the National Arts Festival committee. In 2009 he was appointed to serve on the Ministerial Task Team for Arts and Culture and went on to play an advisory role for the opening and closing ceremonies of the 2010 FIFA World Cup. In 2012 he was the curator for the South African performing arts programme at the 2012 London Olympics. During the same year he was instrumental in the South African season at the Edinburgh Arts Festival. In 2013 Aubrey Sekhabi was also the theatrical director of the Orange Africa Cup of Nations. Most recently he adapted and directed Marikana - The Musical.