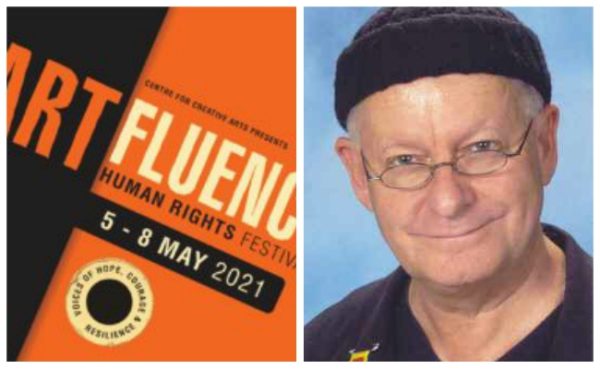 The inaugural ArtFluence Human Rights Festival with a focus on arts, constitution and democracy was presented by the Centre for Creative Arts in partnership with the Embassy of the Netherlands.

Pieter-Dirk Uys opened the event with a keynote address on 5 May 2021.

The only human right I have is the right to be human.

The only human right I have is the right to be human.

See what happens during 400 days of lockdown? Time to think about things that usually are left behind in the rat race rush. Things like looming climate change. Things like our fragile democratic constitution. And things we so easily now take for granted – like freedom of speech and freedom of expression. And, above all, freedom of association.

Some associations were deemed criminal not so long ago. Remember “Love your neighbour, but don’t get caught”?

Fifty-five years ago, a Johannesburg party hit the headlines, because the men were gay and some wore female attire. They ended up in jail.

Fifty-five years ago, a Johannesburg party hit the headlines, because the men were gay and some wore female attire. They ended up in jail. New draconian laws were passed. So, with masks and social distancing, fearful of an invisible enemy, let us not forget where we have come from, so that we can celebrate where we are going in the hopeful “new normal” of tomorrow – and make sure that our democratically elected leaders don’t try the same old dirty tricks again.

Picture this: 1966, a week after the police raid in Joburg, there was another party in Cape Town. I’m 21. With hair! It’s the birthday party of a friend at drama school. Like me, he’s also a “criminal”, ie gay. There were a few young men of colour at the party, which was also against the Immorality Act, but what the hell, this was Cape Town on a Friday night and the party was in Woodstock, a grey area.

The music was loud and we white boys enjoyed showing the other chaps from the Cape Flats that we also had a sense of rhythm. I’m chatting to Alan, who wants to be an actor. We discuss a movie we’ve seen. Not together, because that is against the law, as he is coloured and I am not. Very noisy, hard to have a conversation, so I say,

“My car’s here. Let’s drive up to Signal Hill. I know a place where we can park.” He says, “Great. I’ll be found in the car with you on a Friday night? They’ll kill me! Get a life, man. This is not Hollywood! Remember where you are!” I say, “Sorry, sorry, sorry.” Then the party ends, and Alan says, “Can you give me a lift?” I say, “Yes,” then think: “Oh, God, now I must go into the Cape Flats townships. Hope I don’t get lost on the way back.” I leave the comfort zone of Cape Town, driving down the freeway to the dark horizon, when he says: “Turn right here.”

Rondebosch, Newlands, Claremont. We enter the leafy suburb of Kenilworth. What a relief: familiar territory, driving down an avenue with big trees on either side, great houses behind well-kept hedges. But, as we drive, he seems to slide down into his seat, making himself less visible. Why? What’s he doing? Then he says, “Okay,” and we stop. He gets out of the car and gently closes the door so that there is no sound. I slam my side out of habit. “Shhhh! No, man, are you mad?” We cross the road to a large gate, which he opens carefully. I want to follow him in, but he says, “Hide in the hedge.” “Hey?” “Hide in the hedge!”

So, I hide in the hedge. I watch him cross the grass to a small outside hut, the place they keep the garden furniture and the lawn mower. He opens that door quietly and goes in. Then, I see him in the small window light a candle, and he waves for me to join him. Oh! Now I realise that Alan’s the gardener. Crossing the grass in the dark, I am nervous, hoping there is no garden furniture lying in wait – or a big dog. I go into the small hut and close the door.

He puts a rickety chair under the doorknob; now we are really secure. There’s no electricity. I think the walls are painted with a shiny green colour. The place smells sharply of cleaning fluid. I see the lawn mower standing in one corner, a hosepipe rolled up on the floor. His small mattress on blocks on a floor with no carpet. A piece of black plastic covering the only small window.

I already know he is 19. His parents live in the coloured township of Manenberg. His father sells scrap metal to make money. His mother is a char to a white family. His 13-year-old sister is pregnant. His older brother was killed; I don’t ask how. Then I remember why we’re here. I take off my T-shirt and my jeans and throw them on the floor. I watch him take off his clothes. The way he takes off the white shirt with such respect makes me realise it is a hand-down from the white family he works for, a shirt that used to belong to the 18-year-old white teenager now doing his army training. He folds the shirt carefully and puts it on the bed. Then he sees my clothes crumpled on the floor and picks up the T-shirt and folds it. Then the jeans. He catches my eye and laughs, because now he is really behaving like the black houseboy, folding the white master’s clothes.

Once we have both discarded the uniforms of our class, we are the same. In the candlelight, we don’t even have a colour.

Once we have both discarded the uniforms of our class, we are the same. In the candlelight, we don’t even have a colour. And so, we do what we do.

The next morning, I wake up. The African sun forces a glare through a gash in the black plastic. I look up at the horrible ceiling. Where the hell am I? I look down. He’s sleeping. Then he opens his eyes and sees me.

“No, man, are you still here?” “Don’t worry,” I smile, “I don’t have varsity on Saturdays.” “No! I must wash their cars today! The other garden boy comes to do the lawns. You must go now! They will find you here with me. I will lose my job. I will go to jail!”

He is terrified. I dress quickly. He pushes my shoes and socks into my hand and waves me to the door. “Go, go, go! Round the back. Behind the garage. There’s a hole in the fence. Be careful the neighbours don’t see you. They’ve got guns and dogs!”

Even today, 27 years later, it is still hard to find a vaccine against the virus of racism, because of those many daily new variants.

Even today, 27 years later, it is still hard to find a vaccine against the virus of racism, because of those many daily new variants.

And yet, through all those years of our separate developments, and in spite of the politically correctness of apartheid, we had to believe that “love is love and we all kiss the same”. Very carefully.

So, if you want me to share with you the friendships, the inspirations and the fun I had with my new illegal friends in the dark, then I can really tell you about fear.