Hlezi Kunju authored the first PhD thesis written in Xhosa at Rhodes University. Menán van Heerden asked him about his study, the writing process, and decolonisation.

What is your study about?

This is about South African amaXhosa who are mostly amaMfengu descendants living in Zimbabwe since the late 1800s–1900s. The majority are found in the areas of Mbembesi, Fort Rixon in Filabusi, Kenilworth and the Motapa area in Bubi. It is stated that some of the amaXhosa living in Zimbabwe came from the Eastern Cape with Cecil John Rhodes as domestic workers and on wagons during the 1800s.

The thesis provides new knowledge about amaXhosa living in Zimbabwe and gives an analysis of their sociolinguistic and historical background while showing how a cross-border language can survive against all odds. The subject of culture has been dealt with as there is a reciprocal relationship between language and culture. Ethnography and oral history have been used as methods for this research.

The findings reveal that land, culture, songs, religion, classic (South African) Xhosa literature, technology and social media, as well as the 2013 Zimbabwean constitution, are tools that have played a role in the survival and maintenance of the Xhosa language in Zimbabwe. It also assesses language policy issues, as Xhosa is now an officially recognised language in Zimbabwe.

A study written in English is accessible to a wider audience. On the other hand, writing and reading in one’s mother tongue makes the study more accessible for these speakers. Which one is more important?

I think it’s very important to use your mother tongue, especially if your study is about the people who also speak your language. It is only fair for them that they get to read their own stories written in their home language. Translation is always there as a possibility. You can always get your work translated if necessary. 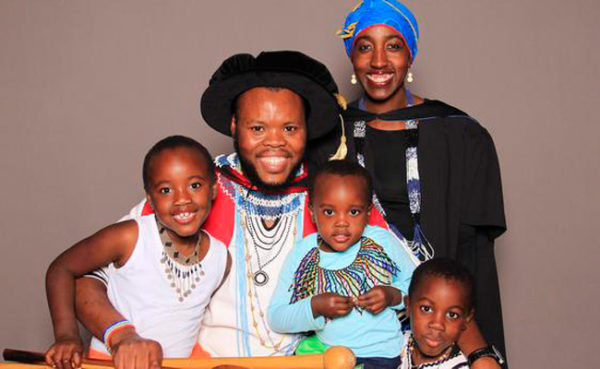 What do the decolonisation and transformation of the education system mean to you (in terms of medium of instruction at universities across all faculties)?

For me decolonisation means getting rid of anything that doesn’t equally benefit the people of South Africa, getting rid of anything that still oppresses the black people of this country. Not being able to receive education in a language you are comfortable in is oppression and it needs to go. People of South Africa, black or white, need to be able to freely choose which language they want to use. We are a multicultural society and that should also be reflected in the way we use languages. There shouldn’t be languages that are “higher” than others. If we really implement language equality, then we can say that our institutions are transformed. We need to start now and start with what we have, otherwise we will never start.

You are among seven other PhD graduates who conducted their theses in African languages at Rhodes. Do you know who the others are?

Is the writing of theses in African languages a new trend?

It is definitely a new trend at Rhodes University. I have supervised two masters students who wrote their masters in creative writing in Xhosa. There are currently one PhD student and two masters students who have shown an interest in writing in Xhosa. I have also taken a decision to write in Xhosa, whether it’s a book or an academic article or presenting in an academic conference.

What did it mean for you personally to have written Rhodes University’s first PhD thesis in Xhosa?

It is possible to use African languages as languages in institutions of higher education regardless of the background of the institution. There should not be a language that is superior to any others. I hope this will not inspire only students to use Xhosa, but also academics to publish more articles in Xhosa.

Academic writing in one’s mother tongue is an acquired skill if it is not a language of teaching. What challenges do academics and students face respectively if they want to develop academic writing skills in Xhosa?

The main challenge is that Xhosa has been marginalised for far too long. It is our responsibility as amaXhosa, as academics, to ensure that Xhosa gets the recognition that it deserves. For it to develop it needs to be used; we can borrow words and phonologise them into Xhosa. The excuse is that there is no terminology. When we start to write in Xhosa, we will realise that there is actually plenty of terminology. When we write in Xhosa, coin more terms and develop the language even further.

What challenges in this regard did you personally face?

There is very little, or close to nothing, of academic material written in Xhosa with regard to ethnography and oral history. This meant that at times I had to do quite a lot of translating. I discovered that we need to develop Xhosa academic writing as it is different from English. There is a lot of “respect” in the Xhosa language and culture. You don’t use first and surnames anyhow; you don’t just refer to kings using their first or second name. Elderly people are referred to as tata or bawo, kings are called by their praise names and so on. In English you simply use the surname when referencing, whether the person is young or old. This meant that I had to find a middle ground. In the thesis I introduce the person the way they would be referred to in their community (remember that this is the first Xhosa document written about the Xhosa people of Zimbabwe. I wanted to them to be able to access it and read their stories the way they told them). Trying to find a middle ground was a challenge, but I tried my best. The current chief of Mbembesi has contacted me and told me how happy he is after having read the thesis.

As far as other African languages are concerned, is there any indication of, for example Zulu, developing as an academic language?

Can you comment on developments at the University of KwaZulu-Natal where Zulu is being phased in as a language of instruction?

This is something that most universities need to look into. We need to do whatever it takes for African languages to be elevated. However, before we implement such measures we need to ensure that there are people to teach and that the university is ready for something like that. Universities have to lead this, then the schools will also follow as they would be preparing the learners for university.