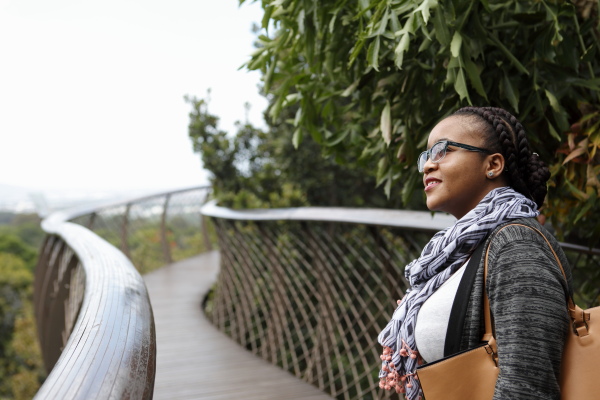 This was her fourth consecutive attempt at ATKV-Muziqanto. In 2014 she reached the semi-finals, but was told that she might want to rethink her repertoire. “Make sure your repertoire matches your voice,” the judges told her. Palesa took that to heart.

In 2015 she moved to Cape Town. Hanna van Schalkwyk became her voice coach; together they selected the best songs for her voice.

What drove her to keep trying?

It showed on the winning night.

During her high school years Palesa was taught to look above the audience; not to engage. On 24 September she ignored that; she chose an audience member to sing to; she became the persona whose role she performed.

Palesa sang with her entire body.

This mere journalist experienced it. She seduced the entire audience with “Mein Herr Marquis, ein Mann wie Sie”, Adele's aria from Die Fledermaus by Johann Strauss. She flirted, she poked fun. She laughed. She became Adele.

Adele, a society girl, taunted Eisenstein, the “Herr Marquis” of the title, for mistaking her for his chambermaid. She teased and flirted with Eisenstein; she also chastised him. Palesa, who had no male lead to sing to, simply took on the audience and did just that – to every one of us.

Getting to know her characters 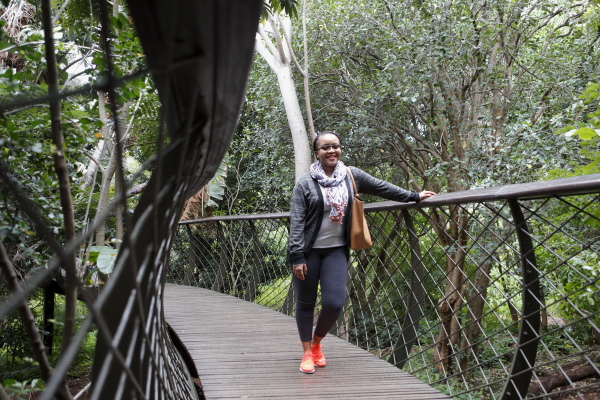 About two weeks after she’d won the competition, we met in Kirstenbosch. She was dressed for walking in bright orange sneakers (chosen by her boyfriend). While she sipped a hot chocolate, I told her how much I had enjoyed the way she charmed everyone during her performance. How did she do it?

She always took time to study her characters. Obviously the music was important, but so too were the words and their meaning; that was how she could understand the persona she ought to portray on stage. Palesa had never had the opportunity to study acting, but her philosophy was simple: she worked hard until she could understand her roles enough to ask: “What would I do if I were in her position?”

While she was studying towards her career at North-West University (NWU) in Potchefstroom her voice coach, Conroy Cupido, introduced aria classes. There his students would sing an aria, and would discuss how best to perform their gestures. That, too, taught her a lot. Palesa also researched other singers. “I try to see what I like and what I don’t like. Then, also, what they do not do, so that I can add a little bit of Palesa to it.”

I immediately loved the phrase. She chuckled when I said so, but chipped in: “It is hard work.”

The hard work began paying off.

Her second song for the final of ATKV-Muziqanto was Massenet’s “Obéissons quand leur voix appelle” from Manon. One song in German, one in French. Does she know these languages?

No, she does not. “I have never had the opportunity to study languages. At Potch that would have been extra money and my dad was already putting in so much. I only had a partial bursary.”

How did she get the characters so spot on, then?

“The internet,” she said. She translated the libretto, made sure that she understood each word and matched each phrase with the right gestures.

That led to my next question: Her diction, how did she do that? I could distinguish every word she sang.

“It is hard work, I do not lie,” she answered. That phrase again. She paused, then said, “Good diction helps the voice too. You do not have to work the voice so hard.”

The meaning of silence

How did she select her songs?

“Mein Herr Marquis” allowed her to show off her vocal flexibility and her seductive acting, after which the Manon was rather demure, even though it, too, was a playful gavotte about being only 20 and full of joie de vivre. During those quiet moments she impressed me most. To be on stage with a full orchestra, and still to be completely audible while singing really, really quietly, was something that many others could not match. Palesa excelled.

She smiled. “Michael Dingaan, one of my mentors, told me there is meaning in silence too. And Hanna van Schalkwyk said even when I take a breath, it has to have meaning. It has to show the audience there is something coming.”

Sure, but how did she pull off the quiet notes? Those were impressive. Palesa paused, then said it was Hanna who had told her that she needed to trust an auditorium with good acoustics to carry her voice. “My job was merely to pronounce every single syllable to perfection.”

She nodded, then added: “She said I should spit out everything with as much joy as I could and not make unnecessary noise.”

“With a little bit of Palesa added to it?” I asked.

She laughed, seemingly happy that I took so much joy from her phrase. 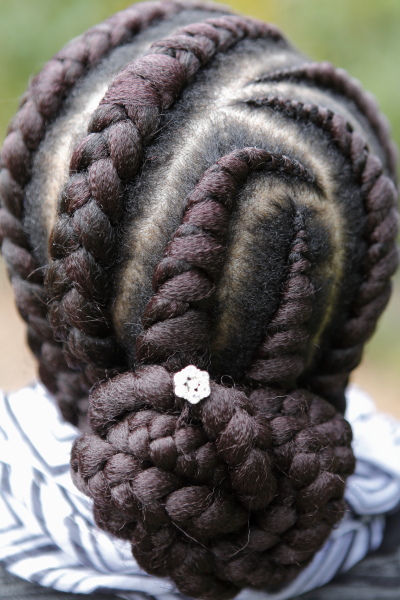 Palesa does her own hair

Choir-singing allowed Palesa to discovered the power of her voice. “I loved how it sounded. I loved how my body worked. I loved the production of different notes and how my muscles reacted to perform each.”

Palesa, the youngest of three daughters, has an older sister whose voice was wonderfully suited to singing gospel, but Palesa soon realised her own was different. She excelled in the classical repertoire.

In high school she began doing solos, first with her school choir, and soon she also entered competitions on her own. During her matric year she heard that auditions were to be held in Kroonstad. That was where members of NWU’s School of Music heard her perform. They offered her a scholarship.

Palesa worked hard, partly because her father, then a member of the police, had to pay for everything the partial scholarship did not cover.

She entered several competitions. The Musicon, a competition based in the Free State, saw her taking first position in 2011 and second in 2012. In January 2013 she competed in the Amazwi Omzansi Africa competition, where she came fourth. She also participated in the University Talent Festival for three consecutive years.

Over the years she has worked with great teachers: Conroy Cupido, Erica Eloff, Barbara Hillmoore, Sally Burges, Njabulo Madlala and Bronwen Forbay have all been part of her past.

Palesa won the Music Bursary in 2011 and 2013, then scooped up the BA Merit Performance Bursary and the Annette Combrink Bursary, which helped her to travel to Oberlin, in the USA, where she took part in a concert and in master classes. She also sat in on singing lessons.

In 2015 Palesa became part of the Studio at Cape Town Opera, where she got the opportunity to work with Ean Smit and David Butlin as her vocal coaches. She signed up with Hanna van Schalkwyk, who still is her voice teacher.

With the Cape Town Opera she was invited to sing the chorus in Mozart’s Così fan tutte, which they performed at the Festival d'Aix en Provence and at the Edinburgh Festival in Scotland. There she received coaching from Susanna Eken, the head of voice at the Mozart academy, and from Nicolas Kruger, the assistant conductor.

Time flew while we chatted.

After Palesa had finished her hot chocolate and I my coffee, we went walking in the gardens.

I asked her about Hanna van Schalkwyk, with whom she still sings.

“Hanna is amazing, just like a mother!” She described Hanna as caring and understanding, always asking about Palesa’s wellbeing, always willing to offer advice when asked for it. “She also knows when to be strict,” chuckled the pupil while we walked, “but she really works hard as a teacher and never rests until something good happens.”

We talked about Palesa’s parents and the sacrifices they had made to help their daughter reach her dreams.

“What are your dreams?” I asked as we walked.

“I wanna sing,” she said without hesitation. “I wanna be on stage. I love an audience. The bigger, obviously the better.”

She has recently gone freelance, a huge step for a young artist. Now she can chase bigger dreams and participate in more competitions. ATKV-Muziqanto has already opened doors for her. “People are now phoning me for gigs.”

We walked the Boomslang, that magnificent tree-top construction, and I snapped her looking regally over Cape Town: the diva ready seduce a city.

Purposefully I led her to the open-air stage in Kirstenbosch and asked her to pose on it. 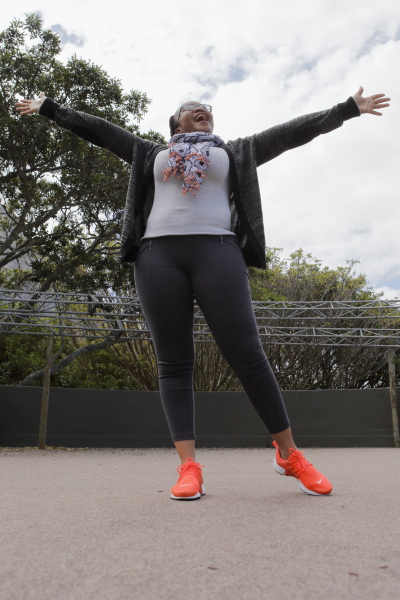 I snapped a picture of her looking triumphant against a cloudy sky.

Suddenly applause broke out behind me.

There they stood; a group of foreign tourists who had just had a little bit of Palesa added to their lives. They loved her; she did not even have to sing a note.