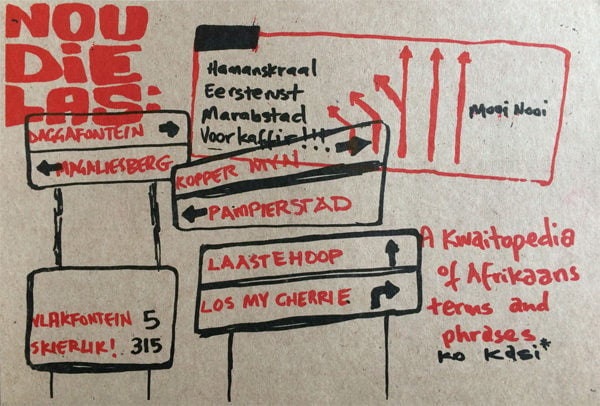 “Because of work, most township dwellers are multilingual and Afrikaans is just a part of that daily mix,” says Vuyiswa Xekatwane. Several workshops, titled Nou Die Las: A Kwaitopedia of Afrikaans terms and phrases ko kasi*, formed part of Aardklop 2017.

*Kasi: diminutive of lokasie > Afrikaans word for location, otherwise referred to as loxion/lekeishene/township: a state of mind

Nou Die Las is a long-term project aiming to compile a Kwaitopedia of Afrikaans terms and phrases. Menán van Heerden chats to Vuyiswa Xekatwane, Kgomotso Neto Tleane and Masello Motana to find out more about the workshops and the Kwaitopedia.

“It celebrates the depth and the innovative energy the township contributed to the development of Afrikaans.” ‒ Nou Die Las Facebook page

Using Kwaito as an entry point, Nou Die Las is an exercise in recollecting, defining and reclaiming Afrikaans and associated dialects, such as Tsotsitaal, as part and parcel of township culture.

“South Africa’s history of oppression has understandably led to an antagonistic attitude towards Afrikaans. This singular narrative often excludes the many ways that people of colour have Originated, Influenced, Developed and therefore Contributed to the canon of South African language and by extension, kultuur.” ‒ FB page

How would you define Tsotsitaal and Kwaito?

What are common words and phrases of Tsotsitaal/“township lingo”? 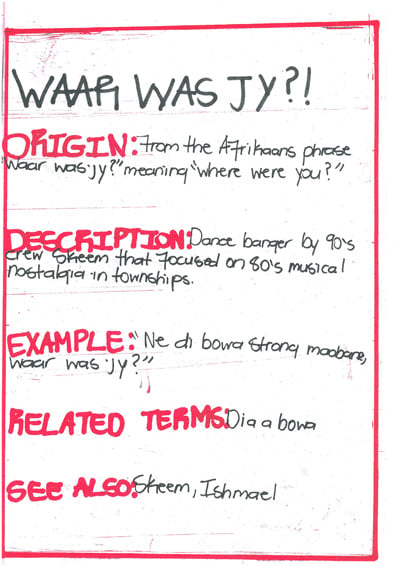 Who initiated the project and why? Where did the idea come from and why do you feel it is important?

It was initiated by Keleketla! Library as part of a larger knowledge production initiative, recognising the value of local practices as critical to collective knowledge-making, and further expanding the idea of a library as a place of knowledge production, and not only consumption. Further, it is the recognition of daily oral practices as rich sites of history and imagination. Specifically, Nou Die Las corresponds to and complements another memory project, Thath’i Cover Okestra, which considers the political and spiritual significance of Kwaito music in South Africa. 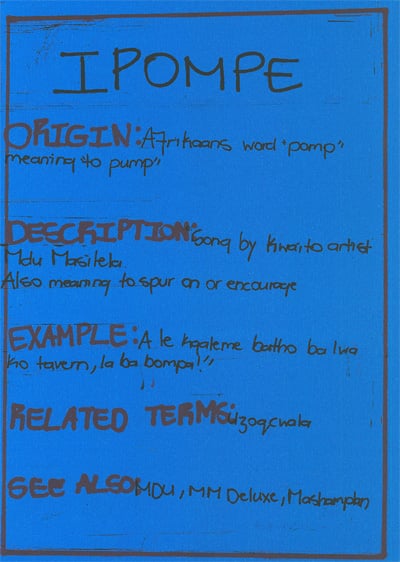 What are the future plans for this project?

The project, after Aardklop 2017, will continue to have several reiterations around Gauteng, North West and other parts of the country, as well as radio and online platforms. The iterations aim to include as many people/voices as possible. We hope to generate words and phrases to be entered into the first print and online volume of the Kwaitopedia. The first volume may be published in time for Aardklop 2018.

“Informed by both past and the present, Nou Die Las is a Communal exercise in Recollecting and Redefining words and phrases that speak to the Ingenuity and constant Evolution of the township Experience. Through the lens of language, and particularly Afrikaans’s role in Kwaito, Nou Die Las seeks to create an archive of Memory, Creation and self-Affirmation.” ‒ FB page

How does your project contribute to engagement with the community and the recollection and redefining of words and phrases “that speak to the ingenuity and constant evolution of the township experience”?

As opposed to prescribing what the Kwaitopedia should be, our engagement with people is based on what people know. The methodology is how we contribute to a long-term intergenerational dialogue.

“Nou Die Las is an opportunity to engage with the Community. As a Collaborative, Open source and Oral sensitive process, Nou Die Las is informed by an immediate exercise in communal linguistic archaeology.” ‒ FB page

Tell us more about the term “communal linguistic archaeology”.

From a linguist, the term means the various ways and means of collecting information outside of so-called formal ways of research, which are often intrusive and are prone to misrepresenting cultures. For a decolonial future, other forms of knowledge have to be incorporated. And I believe that language can answer many unanswered questions as we recover the African narrative.

What languages influence Tsotsitaal/“township lingo” and has it evolved over time? Where did it originate?

Of course, they change over time because they are spoken by people of different times. Some things do stay the same. It was influenced by the languages spoken by the natives of the earliest developments and towns in the interior that were annexed and subsequently ruled by the Afrikaners.

So, that would be a lot of Setswana, Sesotho and Sepedi. The Nguni came into it later, and Zulu is now an influencer of the Kwaito languages, and the major Soweto dialect of it is known as S’camtho. 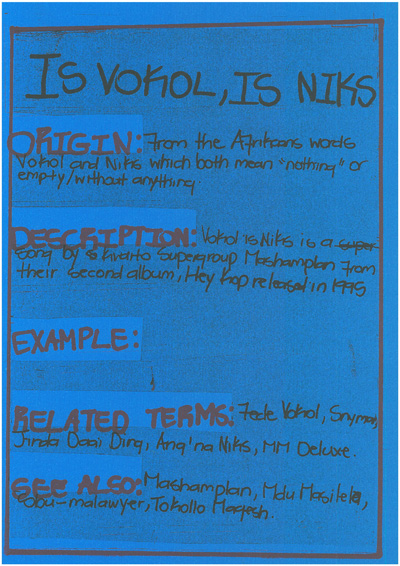 How does it contribute to speakers’ identities?

Most black people speak Afrikaans in the rural/home context; Afrikaans is a part of us. It’s what we did with it that is a collage of linguistic genius of the township. Tsotsitaal is a township legend, one of the barometers of coolness in certain periods of history; to this day, people who speak Tsotsitaal are regarded as the coolest uncles in the township.

I think it’s about space and time. Originally, it was a language of resistance, manipulating the oppressor’s language. Now, it’s more about being proud of coming from the township. Being from the township is about the history, the actual location and all the other things that you are.

“For us it’s more about archiving for the present generation to make sense of who they are and to preserve for future generations.” ‒ Masello

It has been interesting how Afrikaner people, the ones who have come to the workshop space, have been so interested in the project. My worry is that it might add to stereotypes about black people.

But I have seen some people change their minds about Kwaito during some engagement.

What do you think is the value of a Tsotsitaal dictionary like the one published by Louis Molamu in 1998, titled Tsotsitaal: A dictionary of the language of Sophiatown?

It is important to document, publish and distribute elements of cultures that aren’t considered official.

[Interjects] For whom is a subculture a subculture exactly? If I am living a pantsula life in Randfontein, would pantsula culture be a subculture to me? Pop culture is dominant, yet highly relative to different people. Molamu’s work is a foundation and a part of archival work that we seek to add to with Nou Die Las.