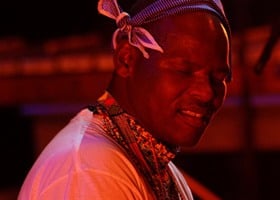 Dizu Plaatjies, the son of an African traditional healer, grew up in the Cape Town township, Langa. His warm smile disguises a serious, experienced and spiritual person. Dizu is the founder and former leader of South Africa's internationally celebrated marimba group, AMAMPONDO.

He led Amampondo in performance from busking as a band of drummers on the streets of Cape Town to concert stages from Canada to China and many lands in between. The group played more than once at the prestigious Edinburg Festival and they wowed crowds at the Mandela Birthday Concert in Wembley Stadium. Their show, Feel the Pulse of Africa ran to packed houses at Johannesburg's Market Theatre and the Baxter Theatre in Cape Town.  The live recording from this show became their first commercial album success, being released in the USA and Europe as well as at home.

Dizu's compositions and arrangements of traditional songs appear on 5 albums by his former group. His ability and willingness to collaborate with other artists is one of his many talents. In a project entitled, Intsholo, he worked with Willi Haubricht in arranging African music for a brass quintet, marimbas and percussion. In totally another direction his playing can be heard on the Techno-Dance tracks of Juno Reactor, with whom he also appeared on stage in Japan.

After over 15 years of touring with the group he recorded his first solo album, entitled, Ibuyambo. The CD was released together with a stage show. This event featured Dizu on stage with most of the players who recorded the album with him performing in his hallmark body paint and traditional outfits and featuring dance and costumes of the peoples of the southern African region.

On this latest album Dizu has liberally mixed various traditional African instruments and songs with his own original lyrics and melodies. For example on the title track, Ibuyambo, he has arranged a melody from Zimbabwe for marimbas associated with Mozambique and placed a Congolese choir over the instruments. On Equonce, he applies elements of Hip-Hop music and the tongue clicks of the San people, to the rural chant from children’s game. In this way he has created a unique neo-traditional blend of sounds.  He describes the new CD as a musical journey through sub-Saharan Africa.

As teacher and he has visited the USA, Scandinavia and Holland. He has performed in the Czech Republic, where his collaboration with local folk artist Jifi Pavlica has made Dizu a major attraction in that country.

In the last year he has toured as a performer in France, Norway, Holland and Germany as well as numerous dates in South Africa.  He now spends most of his time teaching at the University of Cape Town's Music College.