Stephen Timm is a Cape Town-based journalist, researcher and writer. He has written for a number of publications on the small business sector. He is the winner of the Africa SMME Award for Journalist of the Year (2005). Between 2017 and 2020 he served as editor of Ventureburn, a South African publication that covers Africa’s tech start-up sector. 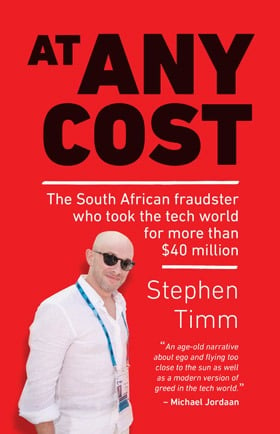 Eran Eyal had it all: a trendy New York apartment, a jet-set lifestyle and investors lining up to get in on his million-dollar cryptocurrency start-up, Shopin. He had come a long way from an ordinary middleclass childhood in Durban and the burgeoning tech startup world of Cape Town.

But the New York authorities pounced in 2018, charged him with fraud and packed him off to Rikers Island. There began the gobsmacking unravelling of a scam that spanned investors across the globe and revealed that Eyal had built a house of cards involving fictitious products, clients and advisors for Shopin and his previous company, Springleap. As more than $40 million went up in smoke, the South African entrepreneur was exposed as an audacious fraudster determined to succeed at any cost – even if it meant spinning a web of lies to do so.

Finally, when Shopin’s public ICO concluded in May 2018, Eyal discovered that the start-up had raised a colossal $42.5 million. He hadn’t quite hit the $50 million target, but, nonetheless, this was a massive number.37 The $42.5 million represented all the collective value of the Ether at the exact time when each investor had bought Shopin tokens, and not the value it stood at when the price of Ether began to decline in April or May 2018. When the price of Ether dropped below $500, Eyal realised that he wasn’t going to reach his target of $50 million.

After counting it all up, Wesly and Eyal then set about distributing the tokens. In all, over 4,000 investors from 63 countries had taken part in Shopin’s ICO. Among the countries with the highest number of investors, claimed Eyal, were the Netherlands, South Korea, Japan, Hong Kong and Singapore.39 Those investors that had taken part also included about 500 participants from Korea and about 20 investors from a Dutch investment club who together put $1 million in the Shopin ICO. In Japan there were over 400 investors who’d taken part.

Everything was sailing along nicely, until 1 June 2018.

The day started off well. Eyal was in high spirits. But as he sat relaxing on a terrace among the picturesque old buildings of Maastricht, in the Netherlands, his phone buzzed. It was a WhatsApp message from the syndicate leader or representative in Japan who had overseen investment there for Shopin’s ICO.

Eyal had met her in October 2017 at a dinner in London where he had made an apparently compelling presentation of Shopin to investors. She was there on behalf of a Russian crypto entrepreneur and happened to sit next to Eyal at the dinner. Later she joined Eyal and other investors as they flew on to Monaco for a second event. The two kept in contact and a few months later they saw each other at two more Bitcoin events in the US, including the North American Bitcoin Conference in Miami in January 2018, where she and the Shopin team partied hard aboard a boat. Later, Eyal even let her stay in his apartment when he was away in Europe trying to net investment for Shopin. Then in early 2018, Eyal asked her if she could help Shopin raise investment from Japanese investors. It was pretty simple. All she had to do was rent a hall at the Hilton in Tokyo (at $10,000 an hour) and get a few people together for a two-hour presentation to sell Shopin tokens. In that presentation alone she was able to raise 5,000 Ether, which was worth about $6 million at the time. For this she stood to gain 10% in commission, or $600,000 paid out in Ether to the same value. Not bad for two hours of work.

That is, until Eyal got that WhatsApp message. What he learnt shocked him. A Shopin wallet had been hacked and thousands of tokens had been stolen from Japanese investors. His immediate response, which he typed back into his iPhone, was “oh no”. The syndicate leader messaged that she was “freaking out”. Eyal told her he’d ask Harkness what they could do. A little while later he messaged back: “Jeremy [Harkness] says there is nothing we can do.” He then added: “likely we are going to ask you to return your commission. This is a huge public matter and we have to hire people to do massive damage control.”

Eyal then instructed her to report the theft to the Japanese police. He got a page explaining the matter from her translated into Japanese. There was one hitch, though. Reporting it to the police would likely lead to the authorities asking questions about how investors had acquired the tokens. Cryptocurrency raises weren’t illegal in Japan at the time, but reporting it might trigger further investigations by the country’s authorities, especially, as it turned out later, because some of these investors may have been part of the Yakuza, the Japanese underworld.

The syndicate leader, it turned out, had made the mistake, whether intentional or not, of using a hot wallet in which to store the syndicate’s tokens, making it easier to hack. In cryptocurrency you get two kinds of wallets – a “cold wallet” and a “hot wallet”. A “cold wallet” is usually stored on a device, such as a USB stick, that can be disconnected from the internet. In contrast, a “hot wallet” is stored in the cloud, or somewhere that is always connected to the net. Using a hot wallet made it possible for anyone who knew how to access the wallet to see transactions going from Shopin into the syndicate leader’s wallet.

Wesly and Eyal considered whether the syndicate leader herself had orchestrated the hack in order to recover a finder’s fee. Typically in the cryptocurrency world, a finder’s fee is handed out by start-ups to recover stolen tokens. The two later came to the conclusion that she probably wasn’t behind the hack.

Still, the financial hit was huge – about $6 million in tokens had gone missing.44 Eyal would later report that the hacked wallet contained over 81 million tokens representing over 10% of the total distributed tokens in Shopin’s ICO. Later, in a December 2018 statement, Eyal would say that the start-up had discovered that the hacker had tried to dump the tokens on various cryptocurrency exchanges, including Idex, ForkDelta and EtherDelta. Such exchanges are usually used to swap cryptocurrency for fiat currency like dollars or yen. However, Eyal said Shopin had been able to contact the exchanges and shut down all activity before more tokens were exchanged for fiat currency.

What is noteworthy is that Eyal may well have benefited unfairly by clawing back the Japanese syndicate leader’s commission, which was paid out in Ether. This is because arguably the real monetary value lay not in the stolen Shopin tokens, but in the Ether that Japanese investors paid to acquire the tokens. And the Ether was safely tucked away in one of the Shopin wallets that Eyal controlled. To what extent he used the Ether from the syndicate leader’s commission to pay for PR and other costs brought about by the hack is unclear.