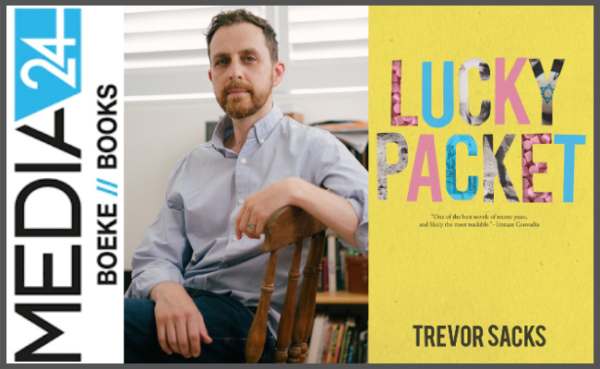 In the early 1980s, in the small town of Pietersburg (later Polokwane), Ben receives a lucky packet from his father, Eddie. Or it may be the sleazy Leo Fein. It is hard to remember. Ben tells of these formative years from the vantage point of adulthood, using humour to navigate his identity: he is white, English-speaking, and Jewish. He is also insecure, thoughtful, and very funny. Then it is 1986: from the lucky packet and the hand that gave it, the novel expands psychologically and politically. The country is in a state of emergency, and violence and anti-semitism flourish. This is too much for Ben to understand completely. He is focused instead on which girl to ask on the Standard Five Tour. And there are the religious demands of his mother, who dedicates herself to Jewish custom only when she needs to call in a favour from her committed family and neighbours. The book is beautifully written, and though a story about a child, it is careful not to cheat us with sentimentality. Instead it is honest, and handles its heavier moments with a light touch. Lucky packet is a wonderfully accomplished novel, Trevor Sacks’ first.

Finuala Dowling’s Okay, okay, okay is a satirical university novel in the vein of David Lodge. She sets her narrative in a thinly-fictionalised UCT, with an insider’s knowledge of the difficulties facing South African universities as they undergo transformation; and, with the assured sense of an experienced novelist, she writes fluently and wittily about such contentious matters as the Fees Must Fall protests of recent years and the current culture of student sensitivity and campus political correctness. Her engagement with the different Cape Town academic and performance communities is amusing, compassionate and astutely judged, and her narrative is populated with all-too-recognisable figures, ranging from self-absorbed lecturers, redundant and superannuated white scholars, activist-academics; detached executives, zealous transformation officers and the new breed of university officials who see students as consumers and the staff as producers of commodity, to the rebellious students themselves who insist that they are undervalued and violated by the institution. But Okay, okay, okay is more than just a very funny novel about contemporary transformation politics in South African tertiary education. It also invites an intertextual reading with Olive Schreiner’s From man to man, and sets up a dialogue, across time and race, with Schreiner’s progressive views on race, gender and class equality.

Karabo Bentil is the “yellowbone” of Duker’s title. In his acknowledgements, the author states that he wanted to use the novel to explore “the different ways in which we evaluate and respond to shades of colour”. Yet Yellowbone does far more than this. As the characters move from Mthatha to London and then to Accra, the novel examines identity through a range of lenses including race, culture, language, gender, family relationships and class. The impact of the work is further heightened by the way in which Duker gives magical realism an idiosyncratic twist. The hyper-sexual Blakean angels that appear when André Potgieter’s plays the violin, for instance, seem to suggest that art can be a portal to different and even discomfiting perceptions about the world we inhabit. The novel’s provocative title is thus slightly misleading in that Yellowbone glides effortlessly over borders, genres and ways of being to establish ultimately that it is love rather than science or skin tone that determines truth. Following a DNA test at the end of the novel, Teacher announces that Karabo is his daughter. Karabo gazes blankly at him because “she had always known she was”.