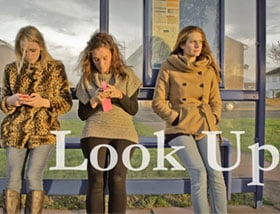 With viral videos telling you the root of your loneliness lies in your phone, it is time to consider what would really happen if phones were gone, using the logic of the video Look Up.

Once upon a time, after seeing a massive increase in recent ice cream consumption, a skittish little man also saw an increase in reported shark attacks, and proudly exclaimed, “Eating ice cream causes sharks to attack! Stop eating ice cream!” This little man was mistaken. The real culprit, you see, was summer – which pushed up both numbers, because more people both swam and ate ice cream to escape the heat. There was nothing wrong with ice creams.

This is a famous example of the failure to understand the difference between causality and correlation – the two cases which distinguish between something leading to an effect, and something simply happening to be related, even merely by chance. Now there is a new such example littering your newsfeed.

Despite the wonderful irony, a video called Look Up recently went viral on the internet, with 38 million views. It propagates the evil of modern technology, its isolating social effects, and how many opportunities you will miss because you look down at your phone.

“So don’t give in to a life where you follow the hype, give people your love, don’t give them your like,” the author says.

The author uses spoken word to musically narrate and preach while a fictional scenario of a non-technology- and non-mobile-influenced life plays out, culminating in love, happiness and fulfilment. Even though I probably could argue the near global case for the wonder of technology, just so that we’re clear on where I stand, my approach here is aimed at something else.

You see, the video uses the logic of counterfactuals as a method to universally condemn the effects of large-scale and popular mobile connectivity. And it is used incorrectly, because like the skittish little man who yelled “Shark!” earlier, this author, too, misunderstood correlation and causation.

Counterfactuals, despite their dauntingly long-syllabled name, are something we all use every day, in some way. When you fail a test, you reckon it could have been avoided if you had studied more; when you are in a fight with your significant other, you realise that it could have been better had you not forgotten to call.

What you do, then, is take an event and isolate the effects of one variable at a time, and then change just that, and see if the outcome changes. In the Look Up video, many such attempts are made. With pictures of children outside fading, the lyrics progress to:

When I was a child, I’d never be home. I’d be out with my friends, and on our bikes we’d roam. With holes in my trainers I’d graze up my knees, we’d build our own clubhouse high up in the trees. Now the park’s so quiet, it gives me a chill. I see no children outside, and the swing’s hanging still. There’s no skipping, no hopscotch, no church and no steeple.

Simply put, the removal of iPhones, BlackBerrys, iPads and the like wouldn’t fill our parks again, or our churches, for that matter. The author tries to paint a picture by limiting the difference between these two scenarios by simply changing the presence of, and possibly our dependence on, modern technology. But this wouldn’t result in the outcome he hints at, despite its desirability. Besides the changing urban landscape, increasing populations, and crime, the following examples help show what the role of technology is in these outcomes.

So when you’re in public and start to feel alone, put your hands behind your head, step away from the phone!

A more relevant example to us all would be the fact that wherever you go out for supper, for instance, someone will be on their phone for a large part of the evening, especially if the crowd is larger, or the children are younger. We all know the heart-piercing insult of seeing the tell-tale nod of absent-minded acknowledgement of a conversation never heard, while eyes stay fixed to a glowing screen. And as much as we would like to blame that eerie glow for the lack of contact, this would be too simple, too easy, and too wrong.

The time you take in all you’ve made, just by giving life attention. And how you’re glad you didn’t waste it by looking down at some invention.

While you’re on a date with a guy who keeps looking at his phone, the counterfactual isn’t that if his phone were to be absent he would engage in the most meaningful and deep conversation your tired mind needs – he would make small talk at best, or at worst say not a thing and make an excuse to leave early. A person who finds too little stimulation from real people and rather peruses his phone is not someone who you’re going to have a connection with. Maybe with someone else, unfortunately, yes, but taking the phone out of the equation would not change what we want it to change.

If anything, phones have made it easier to see who has any real interest, or grounds for interest, in a human connection with us. In the years that the Look Up video references so nostalgically, small talk was all you had to fill the void of a date or encounter you rather wouldn’t have, and there are many more of those than we care to admit – and I hate small talk as it is, even if I can type it with just my thumbs and no eyes now.

Not being able to tell where opportunity lies (which is much rarer than the video makes it out to be) while having to navigate the maze of endless small talk for a real connection must have been terrible.

We are, despite our cities, friend lists, contacts and parties, very alone, and always have been, to lesser and greater degrees. There are few out there who can bear our quirks. Freud spoke of the hedgehogs’ dilemma, where a group of hedgehogs in the winter seek one another’s warmth, but when they get too close, they prick one another, and must be alone again.

There are people who can bear our “prickly spines”, but they are few and far between. What our phones, iPads and internet do let us do, though, is find these rare people in any corner of the globe, and not just have to look for another Goth in the backyards of just Pofadder.

Our technology might not be able to facilitate a gentle hug, a candle-lit dinner or a longing stare into another, real, human being’s eyes we forged a connection with thousands of kilometres away, but in the end isn’t that better than the counterfactual?

The answer to social isolation probably doesn’t lie in our phones, but it most certainly doesn’t lie in not using them. So, don’t “look up”; rather keep using any means necessary to look for an opportunity not to have to look down anymore – phones included.

This contribution was produced as part of a collaboration between LitNet and the University of Stellenbosch's Department of Journalism in 2014.