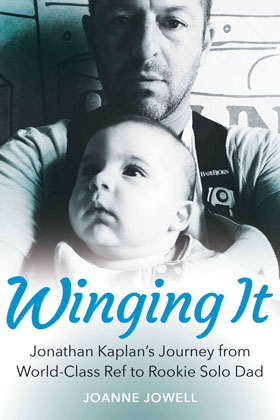 I know very little about parenting, apart from what it feels like to be on the receiving end of it, but I do like rugby very much and always enjoyed watching Jonathan Kaplan referee matches when he was still active as an international ref. I follow him on Twitter and, like thousands of others on social media, I was amazed at his news two years ago on 1 June 2016: he posted a photograph of himself holding a baby boy, Kaleb, his biological son; but what was missing in the picture – in all possible ways – was a mother.

As he was approaching his 50th birthday a few years ago, Kaplan decided to fulfil his deepest personal wish – to become a father – but he was not in a relationship at the time, and it did not look like one was on the cards where he could procreate the conventional way, and so he decided to have a baby on his own, with the help of an anonymous egg donor and a surrogate. Winging it: Jonathan Kaplan’s journey from world-class ref to rookie solo dad by Joanne Jowell tells this part of his life story.

For the book, Jowell spoke not only to Kaplan, but also to all the other relevant participants of this unusual tale, interweaving her narrative with the individual interviews to form a fascinating collage of motives, perceptions, challenges, failures, and triumphs. It makes for an incredibly absorbing read. I loved the photographs of Kaleb at the beginning of each chapter and the two photo sections included in the book. And there is an amazing twist at the end of Winging it that no-one could have foreseen. Written into a novel, this kind of coincidence would have been too miraculous to be plausible, but it feels just right in a memoir which is full of all sorts of miracles.

As one can imagine, not everyone was impressed with Kaplan’s way of approaching parenthood, and Jowell captures the diverse responses to his choices: “Most thought of Jonathan as a trailblazer – smoothing a path for unconventional families in a world that values diversity and craves ways in which to normalise the alternative or untraditional. But some saw him as a disruptor – a progenitor of a broken family in his inability or unwillingness to create a nuclear one.” Winging it illuminates the entire undertaking of what an egg donation, IVF, surrogacy, and solo parenting entails. None of it is for the faint-hearted.

Being a child of divorced parents, I do feel that what truly matters for children is not who does the loving, but that it is done, honestly and unconditionally. Kaplan is no stranger to patchwork families, having grown up in one himself. The experience made him deeply aware of what is at stake for a child who has to deal with the break-ups and reconfigurations of a family. He flourished despite these difficulties, and went on to have a successful life, remaining close to his parents and siblings.

Until the idea of having a child on his own came along, Kaplan’s life was focused on rugby, running, bulldogs and bonsais. Such interests require determination and patience. One would think these are the ideal traits of a future parent, but nothing truly prepares us for what lies ahead when a baby draws his or her first breath. Winging it is brutally honest about Kaplan’s feelings of inadequacy and insecurity along the path he chose. The process of finding the right egg donor and a surrogate to carry the baby is wrought with disappointments. Just about everything that can go wrong does – including low egg counts, miscarriages and a life-threatening ectopic pregnancy. And that is only before the actual birth of Kaleb. After his arrival, Kaplan struggles to bond with the baby boy at first. It is an emotional roller coaster. Although there is no second parent to help him cope, friends and family members are always on standby to offer assistance. Kaplan is also in the fortunate position of being able to hire a night nurse and a nanny whenever he feels he needs to – a privilege he is acutely aware of, but never hesitant to fall back on.

There is something unsettling, but also intriguing, about his ability to walk away and to allow others to take charge when he needs space and time for himself. I think many parents, especially mothers, will envy or dislike him for it, or both. Kaplan has strong views on how to go about dealing with the baby’s needs, about discipline and about his role as a parent; for the rest of it, he is alright with “winging it”. “I’m happy to be unpopular,” he says, “if it means I’m being ‘real’, being true to my core values and then living them, acting on them.” There is a lot of reassurance in this type of stability.

Kaplan is unconventional in many other ways, not only as a parent. Numbers and astrology play a huge role in his decision-making. It’s his way of staying in control and understanding the world. At some points in his story, one cannot help but wonder whether these are rational choices, but knowing what keeps me balanced at times, I cannot and do not intend to judge. What I found refreshing about Winging it is already suggested by the title: it is a warts-and-all story – Kaplan is unapologetic about his moments of doubt, frustration and inability to cope – and often, it is clear that he has no clue what he’s let himself into. But what is equally admirable is how Jowell makes sure that the story is told in a sensitive manner, with respect towards the people involved, especially Kaleb, who will be able to read the book one day. His father’s devotion to him is obvious – few children in the world are as much wanted as Kaleb was and is, but he is the only one who will ever be able to say how it has all worked out for him – this experiment with fate, his life. May the stars be on his side.