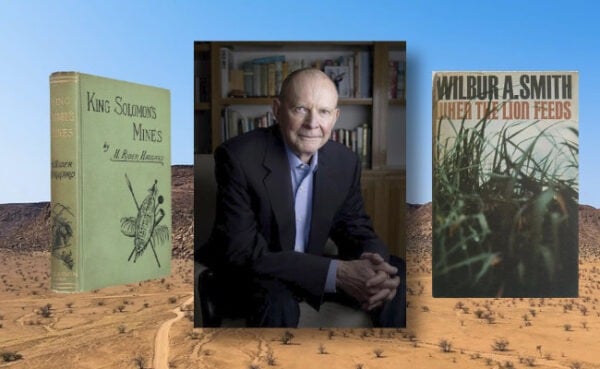 Photograph of Wilbur Smith supplied by his website: https://wilbursmithbooks.com/

Wilbur Smith, who passed away unexpectedly on the 13th of November, was Africa’s greatest historical novelist.

I first met Wilbur in the summer of 2014. I had been asked by Kevin Conroy Scott, Wilbur’s long-time agent, to meet him at a coffee shop in Cape Town to discuss the setting up of the Wilbur and Niso Smith Foundation. I didn’t really know what to expect. I had, a couple of years earlier, started to publish Wilbur in Afrikaans, but this seemed to me such a minor event in the global ecosystem that surrounded Wilbur that I could not believe that he was even aware of it.

And then, out of a crowd, there he was – standing at my table with his hand held out. To this day I can still hear his voice in my head, see that wry smile. “James Woodhouse,” he said. “I’m Wilbur Smith.” As if he needed to introduce himself.

He was 81, but with the energy of a man half his age. Not only did he know who I was, but he knew where I had worked and what I had published. I would soon discover that this was one of Wilbur’s traits – he was meticulous in his preparation for every meeting and event.

I remember two further things from that first meeting. First, that he was genuinely delighted to have been published again in Afrikaans – to the point where he scolded me for not having brought copies for him to sign. And, second, that he never asked me about the job.

Instead, we talked about Africa. For the first time in more than 20 years, I had been rereading H Rider Haggard’s King Solomon’s mines – Haggard grew up less than 20 miles away from my own birthplace in the UK and his daughter, Lilias Rider Haggard, was a heroine of my mother’s, but I had forgotten just what an extraordinary novelist he had been. I was, at the time, inordinately pleased by Allan Quatermain’s judgement of the parliament buildings in Cape Town – under construction in the opening chapter of Haggard’s most famous work: “After spending a week in Cape Town, finding that they overcharged me at the hotel, and having seen everything there was to see, including the botanical gardens, which seem to me likely to confer a great benefit on the country, and the new Houses of Parliament, which I expect will do nothing of the sort, I determined to go back to Natal ...”

Wilbur, of course, had an encyclopaedic knowledge of Haggard’s work – some 60 novels – and, initially, as we spoke, it seemed like he was busy with research for a new novel set in the 1880s. However, in the 40 minutes we spent together, we spoke about the history of Robben Island, the life of the enigmatic Zanzibari slave trader Tippu Tip, the work of Es’kia Mphahlele and editing of William Plomer – born in Polokwane and responsible for the birth and continuing appeal of James Bond.

In reality, as I was to discover, Wilbur was not writing a new novel at all. He was busy with the outlines of over 30 new works. Some of these were standalone pieces and some were continuations of the various series that he had built over the years. In the time I knew him, Wilbur worked every day on whichever novel was the next in line, but in between this he was always busy with new outlines and the co-authored works that they became. His focus was on trying to tell the stories that he could see so clearly in his mind’s eye before his time ran out. As he told La Republica: “I have stories ... which will take a thousand years to write.”

I don’t think that any other author has had a vision like this. Wilbur was unique in so many ways – as both a novelist and a human being – but before his passing he had written 37 novels, co-authored a further 9 and left hundreds of thousands of words in outlines for many many more. He loved Africa and he wanted, more than anything, to take his readers on a journey though time – to show them the continent as he saw it, as he knew it. And this is why, to me, he is and will remain Africa’s greatest historical novelist. Of course, there is adventure too – by the bucket full – but the meticulous research, the attention to detail, the grand historical sweep of each of his novels is, to my mind, unparalleled.

On the 13th of November 2021, Wilbur Smith passed away. I will miss him in ways that I will only be able to explain in time, but although Wilbur has gone, his work will continue to bring joy to millions around the globe – from Norway to the far corners of Botswana. He made sure that his vision will be realised – that the stories he still had to tell will keep us all entertained for years to come.

Wilbur once famously said: “I had it all, I did it all.” And he was right. He did it all, he had it all. But we are the ones who are the richer for it, because we, and the generations to come, get to read about it.