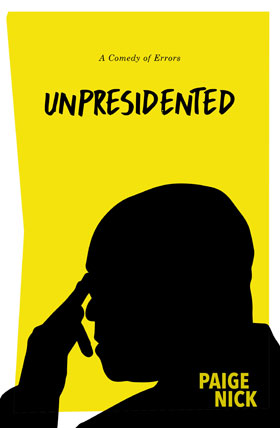 Stars: four out of five

The expression “zeitgeist” can be defined as the contemporary cultural, moral and intellectual climate. As a novelist, columnist and advertising copywriter, Paige Nick has demonstrated a unique talent for taking the pulse of present-day South Africa and weaving a story that offers the country’s zeitgeist to readers in an entertaining, irreverent and enjoyably subversive manner. In 2015, right at the peak of the banting craze, following the enormous success of The real meal revolution, Nick brought us Death by carbs – a humorous crime mystery wherein the murder victim is none other than Professor Tim Noakes himself.

And now, in the midst of allegations of state capture and the country’s credit rating having been downgraded to junk status, Nick has released her latest novel, Unpresidented.

The novel revolves around two main characters. First up is Matthew Stone, a journalist disgraced after playing much too fast and loose with the truth in his reporting. Stone is also trying to put out the fires left behind in the wake of his recently ended cocaine habit, which had seen him indulge in some bizarrely destructive behaviour, such as handing over his now ex-girlfriend’s dog as surety to a drug dealer. The only work Stone can get is as ghostwriter for the memoirs of ex-President Jeremiah Gejeyishwebisa Muza (no prizes for guessing whom this name alludes to). Muza is an over-the-top caricature; a character perfectly suited to Nick’s witty and sometimes scathing satire, he is a true master of alternative facts who could put even the current title holder in the White House to shame – this is a man who managed to get himself out of prison on medical parole for an infected toenail. But despite managing to finagle his way out of prison, Muza is having anything but an easy time on parole: he is routinely disrespected by the only two of his numerous wives who have stuck around, and both are rapidly becoming obsessed with Tinder. His extensive homestead is falling apart, and his private study has been converted into the hub of a sewing business. Added to these woes, he faces imminent eviction for unpaid rates and taxes.

Throughout the novel, the reader gets to experience both characters’ interior worlds, and these scenes serve to humanise them – just a bit. Stone is often cynical, but there is an almost fatally optimistic aspect to his character that evokes a smidge of empathy, such as an episode in his past when he had dated twins and thought things would work out fine. Muza’s monologues, as he confesses his deepest hopes and fears to a voice recorder, show someone desperate to return to former glory, and, at times, just trying to stay afloat financially, leading to some hare-brained schemes such as attempting to use his four honorary doctorates to set himself up as a traditional healer.

Readers will find many familiar and notorious characters popping up as Muza tries to trick his old acquaintances Helen and Pravin with a lottery scheme. The one person willing to invest seems to be Muza’s old pal Robert, but only using Zim dollars. To add to his woes, Muza has been abandoned by the Guppi brothers, who have now moved the hub of their business to Dubai and are not taking his calls.

The one character with some real moral fibre is Vuyokazi Ngcobo, Muza’s parole officer, and it would have benefited the story if she could have had some more time on the page.

On the one hand, it’s a pity the novel is so South Africa-specific, since foreign readers might miss out on a lot of the humour; but, on the other hand, it is precisely this home-grown nature of the novel that allows it to have so much sparkle – such as the drug dealers who try and get Muza to use his connections at an air force base to smooth the way for bringing in a large shipment of, according to them, nothing more than showerheads.

The bizarre state of South African political affairs often leaves one unsure whether the appropriate response is to laugh or cry. But if laughter is indeed the best medicine, a large dollop of Unpresidented could be just the right prescription.