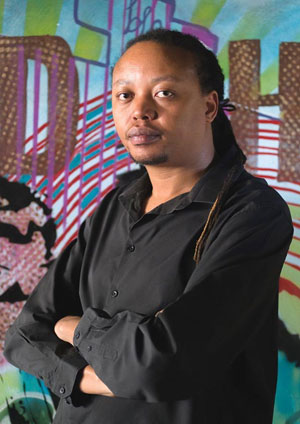 I would describe myself as an artist, multimedia designer, and art director. For the past 12 years I have created artworks by means of painting, spray painting and stencils in order to comment on social issues, and on the politicians and events that make up the South African social landscape. More recently I have used silk screening in order to bring the content of the work (that is, critical observation of people and events) closer to a media-based technique. These works are the artistic version of satirical journalism and social critique, often controversial. They depict stereotyping by the media. Humour is an important ingredient, as it is in plays, comic books and paintings. This dual vision (of looking at events both from the inside and outside) reflects the way in which perception is shaped by the media and subsequently becomes reality, and affords the viewer a glimpse of contemporary local politics as well as lived experience in the urban jungle.

Is there a bit of Jean-Michel Basquiat in your work? Are you influenced by him?

Yes, my work is heavily influenced by Basquiat. The commentary in his artworks and his raw techniques of applying paint or oil stick are pure genius. I am also influenced by Andy Warhol, his long-time art collaborator. 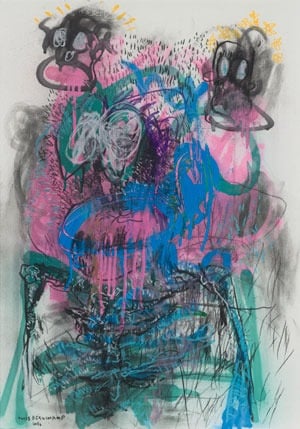 At what age did you realise you wanted to create art?

I really don’t remember. I have been painting, drawing and writing for most of my life. It was when I was exposed to art in high school that I decided this is my journey.

Tell us about your chosen medium.

I work with acrylic, oil paint, charcoal and oil sticks. They all have their own personalities that drive my process in creating art. 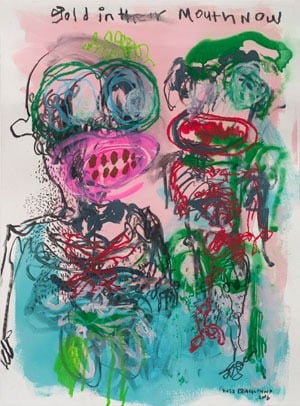 Where do you have your studio? And what is your ideal working environment? (Music? Company? Peace and quiet? Regular hours?)

I work in my small studio in Pretoria. It is not comfortable and I like it that way; it reminds me every day that I have made it. I get to do what I love in my lifetime, and all the challenges, heartbreak and disappointment have been blessings that have been preparing me for this journey and truly understanding the meaning of freedom.

I play music only when I finish a work, accompanied by a glass of red wine. I have been listening to Janis Joplin and John Lee Hooker a lot these days, but I try not to play music when I work. Writing gives me peace, I am currently in pre-production for my first film feature; I will give more information when the movie is done.

Which work do you consider your best? And your worst?

I really don’t think in that fashion; it is already hard to let go of my work; they are little pieces of me.

Your work is influenced by comic art. Any specific comic artists?

I use comic art characters in my works inspired by Tin Tin in Congo 1931, the Mexican comic character Memin Penguin, and other racist caricatures that have been used to depict black people in comic books throughout history.

What responses have you received from viewers? Do people see humour or satire in your work?

I do get mixed reactions. I do play with satire in some of my works. Some people will see the cartoon caricature and think nothing of it; some get offended by the images. The use of black stereotype coons in my work is to take the power away from the images; these images are still very alive today through television, films and TV adverts because of ignorance and the colonial legacy. Unfortunately, half of the South African population is not educated about the arts. 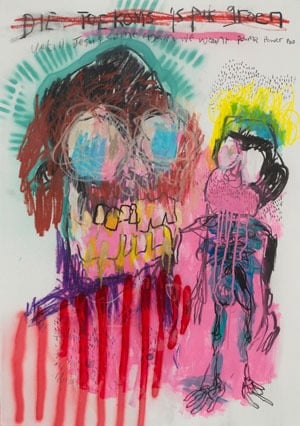 Has your style changed or developed over the years?

How is your family supportive in your career?

My parents paid for my schooling, took me to exhibitions, bought materials for me – and, for me, that’s enough support. In terms of really understanding what I do? A big no.

Which South African art would you collect?

I am collecting a lot of up-and-coming artists from Pretoria and Johannesburg, but I do have two Diane Victor etchings, and I want more. 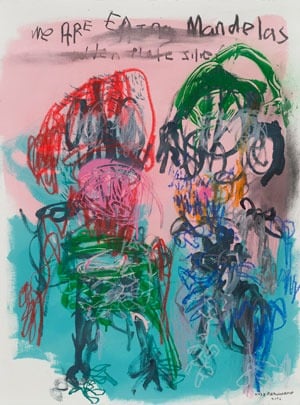 Whose work inspires you most?

That of Ai Weiwei, a Chinese contemporary artist.

How did you go about brainstorming an idea for the Boekmerke exhibition? Or did you have an existing work that was appropriate for the theme?

My works are like bookmarks in a way, and Anne-Ghrett, the curator of the gallery, wanted the work in the gallery. A brave lady.

In which other galleries has your work been exhibited before?

Do you ever experience a creative block?

No. I feed my brain with books, travelling, art and natural history museums, shebeens, documentaries and good wine.

What languages do you speak?