This is not merely a book about death and dying. All manner of reflection is included: the blunt, the prosaic, the truthful, the tragic, but through it all comes connection – even celebration – as the writers share memories and experiences that lend the stories universal appeal. 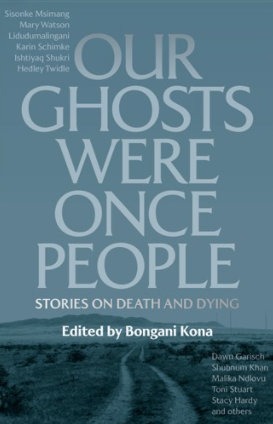 I wondered – as I had myself written a memoir of death and dying – whether I simply needed to move on from the intense subject matter, and give this book a skip, at least for now. I rationalised that I needed happier, more uplifting subject matter. But, of course, I was curious, and continue to be curious about death – particularly as for many of us, the portion of our remaining allotted three score and ten is far less than the days already spent – and so I began to read. And I didn’t stop. I loved it.

This is not merely a book about death and dying. All manner of reflection is included: the blunt, the prosaic, the truthful, the tragic, but through it all comes connection – even celebration – as the writers share memories and experiences that lend the stories universal appeal.

A number of highly personal essays expose myriad issues and emotions that loss of life brings up, about how we grieve, how we keep on, how we deal with the business of death and dying – the funerals, the aftermath. What they have in common is that at the forefront are “our people”: the dead, the remembered, those who have impacted our lives and left lasting impressions – many cherished, but not all. In many of the stories, the dead come to life, vividly, colourfully, as they are remembered with affection, admiration, longing, but also at times with ambivalence. I was struck by the honesty of many of the pieces, the willingness of the writers to tackle the difficult emotional issues brought on by loss.

Karin Schimke’s searing piece, “The favourite”, exposes abuse by her father, and recounts her ensuing aversion towards him, even after his death.

Toni Giselle Stuart, too, in her poem, “We become women when our mothers die”, explores a problematic relationship and asks a pertinent question: “Has my mother chosen silence even after/in death?”

Dela Gwala’s “A postbox on the corner of eternity” is a letter to a dear friend, one who died in a car accident at age 23. “I couldn’t bear watching Ugly Betty without you …. I’m just grateful that I got to spend that last birthday with you,” she writes, as if the departed is still among us. The sense is clear of this continual “missing”, a feeling so many of us carry as we think of those long gone.

Then there are the stories that recount the minutiae of dying. Catherine Boulle’s “Record keeping”, a series of vignettes flush with detail, presents her grandmother in her last days, a touching but also candid look at the decline of the elderly.

Vonani Bila writes an epic poem, “Ancestral wealth”, of the death and life of Papa, once a worker at Umlazi Hospital, where he saw all manner of pissing, shitting and dying, who now himself is brought home to rest forever: “Under these tall umbrella thorn trees/ My ancestors rise and hold hands/ They sing in unison/ Dance in rhythmic step/ Around the fire.”

In “A man, a fire, a corpse”, Rofhiwa Maneta writes of his father, a policeman, who escapes assassination. He writes of the fear experienced in the household, shocking us with the truth that “on average 160 police officers are killed each year”.

One of my favourite of these more intimate pieces is Anna Hartford’s “Small animals”, which places the randomness of death – the ultimate, inconsequential nature of death – into a philosophical context. She tells of saving an errant mouse hiding behind a cupboard. “Beyond the walls, the world was both cruel and beautiful; civilizations rose and fell; the sky flashed and the deep sea yearned. But here within them, and grander still: a mouse had made it through another day.”

Our ghosts were indeed once people, are still people – in our thoughts, in our dreams, in our memories. As much as the collection is an interrogation of death, it is a tribute to life, a remembrance of those who once lived alongside us, whose ranks we will all join.

From the celebration of even the smallest life, of the tiniest creature, written with poignancy and beauty – the intimately personal – we move on to essays dealing with themes of crime and war, tragedies of the past that live on in the hearts of those who mourn still.

Madeleine Fullard’s “Investigation pieces” details how the missing – particularly those who disappeared under apartheid, falling prey to assassination – are traced, their remains recovered. The piece covers the process of painstaking research and discovery which lead to the unmarked graves of those who fell, and sometimes, just sometimes, there can be closure for families who, decades later, still mourn their sons. She poignantly writes of current times: “South Africa is awash with Unknowns: migrants killed far from home, a pedestrian knocked over on a highway, a gunshot victim in a remote field. We pick them over, this way and that, cast this one aside and finger the next one. The details of viable candidates are noted and copied.” It is a heartbreaking essay, one in which life comes across as cheap – but it is also uplifting to learn of those who devote their lives to justice.

Bongani Kona recounts in “The descendants” the disappearance of his grandfather in Zimbabwe, bringing home the unending tragedy of mourning those who leave without a trace. “My generation was taught nothing of the massacres, which Mugabe dismissed as ‘a moment of madness’. We struggled to make sense of the ambient, hushed-up violence that lingered on long after the war. … Suddenly I felt myself to be one of those travelers besieged by the bones of the dead. I was overcome by the need to trace the silences [my grandmother] kept.”

Pertinently, for our current times, Sisonke Msimang writes, in her piece “Years and years”, of her childhood fears of war. “I have been scared of dying since I turned 12 in 1986, the year of the Chernobyl nuclear disaster during the late stage of the Cold War. … Most of the time this is a low-level dread, but at night, before I sleep, I feel it in my chest – the weight of it too large for my growing frame.” A sentiment we can all appreciate right now – the fear of death, of destruction, of annihilation, as Putin threatens Europe with nuclear intervention.

Hedley Twidle’s riveting essay, titled “The great dying”, intertwines human history and earth history, one not able to exist without the other. It is clear that with the “remorseless climb of CO2” and global warming, whatever the extinction event that brings an end to the Holocene-Anthropocene era, we (our remains, our edifices) will also one day be studied by anthropologists, those we would regard now as alien, as from the future. “But for now,” he writes, as life goes on, in this “steadily diminishing, lonelier world … those of us alive have to live through it: the end of species story braided into our own story’s ending.”

I have mentioned only a handful of the 30 contributors, which include a cast of literary stars such as Gabeba Baderoon, Lidudumalingani, Mary Watson, Malika Ndlovu and Dawn Garisch, to name a few more. This top collection, thoughtfully curated and meticulously edited by Bongani Kona, with inclusion of pieces of varying length as well as poetry, is a must-read.

It will sadden in places, tears may well be shed, but it also uplifts as it strengthens connections to community. Our ghosts were indeed once people, are still people – in our thoughts, in our dreams, in our memories. As much as the collection is an interrogation of death, it is a tribute to life, a remembrance of those who once lived alongside us, whose ranks we will all join.

I learned, writing my own memoir of death and dying (Death and the after parties), based on the story of my husband’s death from an out-of-the-blue heart attack, that death and life are equal partners and travel together, teasing out a courtship of sorts, until the end comes for one of the pair (or both, one never knows). This varied collection brings it home: as we celebrate life, we cannot, and should not, ignore Death at the edges of the dance hall, waiting to fill his card.

It is only through engaging with death, even embracing death – and before that, a process of dying, if we are given the opportunity to have time to reflect on our lives before we leave – that we can face the inevitable when it comes to those we love, and to us, grateful for whatever their, and our, experience was in this life.