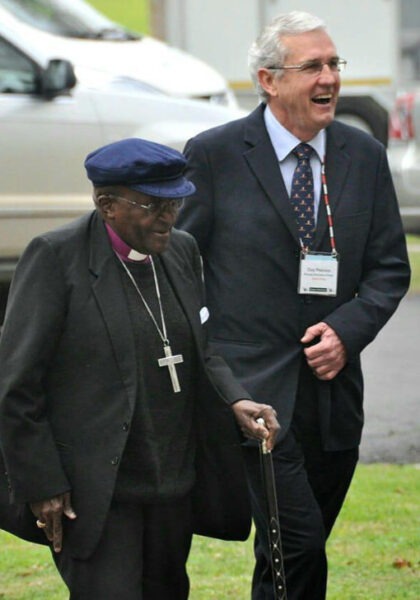 He sprung up into the air, waved his hands and said in total joy: “You could say we are following each other around!”

Desmond Mpilo Tutu was born on 7 October 1931 in Klerksdorp, South Africa. He died on 26 December 2021 in Cape Town, South Africa. He won the Nobel Peace Prize in 1984 “for his role as a unifying leader figure in the non-violent campaign to resolve the problem of apartheid in South Africa”. At the time of the award, he was Bishop of Johannesburg and former general secretary of the South African Council of Churches.

During the time that Bishop Tutu was the Bishop of Johannesburg, he was the Visitor of the school where I was teaching, St John’s College. It was in February 1985 that he was instituted and therefore became, ex officio, the Visitor of the college. I recall us gathered in the college library, where Bishop Tutu was addressing the A-level class. The member of staff tasked with the management of the class was present, standing to one side. As the bishop was addressing the students, the staff member interrupted the bishop. Bishop Tutu gently turned to him and reminded the teacher that he was busy addressing students. Bishop Tutu remained a much-loved and greatly respected Visitor of the school.

I met Bishop Tutu again, then as Archbishop of Cape Town, when I came to teach at Diocesan College Rondebosch (Bishops). It was my first year there (1991), and Archbishop Tutu had been in that position already from 1986. I recall that day as if it were yesterday. Archbishop Tutu had come to the school to officiate in his position as Visitor of the school. I greeted His Grace, saying, “Your Grace, first you were my bishop at St John’s College – now at Diocesan College.” He sprung up into the air, waved his hands and said in total joy: “You could say we are following each other around!”

His Grace came again several times to officiate at the school, for instance, at the confirmation services each year. I also remember one day when he came to St George’s Cathedral, where I was a communicant. After the service, several young people came to be photographed with His Grace, standing with him in the photograph. The officiant felt it might be too much for him having so many people around him. For him, it was never too much; His Grace insisted that the young people stand with him and that photographs be taken.

His Grace came to Bishops to give the opening address at an international conference at the school in 2015. Delegates from all over the world attended. Not only was the applause after the address a standing ovation – it continued for a few minutes. I heard one of the delegates say, as he was leaving the chapel, in his American voice, “Well, after that, I might as well go home!”

Much will be written about Archbishop Emeritus Desmond Mpilo Tutu (1931–2021). He was one of the greatest the country has ever seen, iconic beyond description, who stood up for the rights of all South Africans, and whose legendary status reached the rooms, offices, courts of monarchs, heads of nations and spiritual leaders of virtually every country in the world, as seen in this tribute by CNN.

The presidency issued a statement which can be found here.

Condolences to Mama Leah Tutu and to the Tutu family. Rest in peace, Desmond Mpilo Tutu.