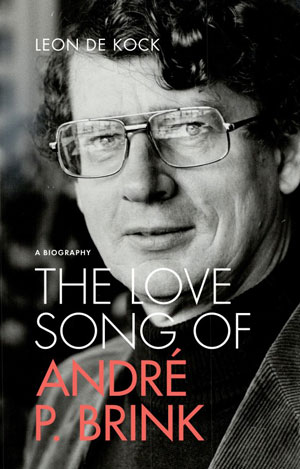 Leon de Kock has written a compelling, warts-and-all biography of André Brink that in no way diminishes his subject. Brink’s stance as an outspoken critic of the apartheid regime and his international stature as a dissident writer cast this essentially private person in the role of an articulate and highly visible public figure. Being in the limelight was a necessary, and by no means always unwelcome, aspect of his work as a writer, but Brink was happiest in the privacy of his study, living inside a story or writing his journals. Although he viewed intellectual inquiry, writing and, indeed, sex as equally important in his personal quest for meaning and truth, his writing often concealed as much as it revealed. His 2009 memoir, A fork in the road, is a case in point inasmuch as the most important relationships in his life – and those were almost exclusively with women – were either glossed over or redacted to the point of blandness.

Before going any further, I need to declare an interest. Although I’ve not met Leon de Kock, I did know André Brink. I was in the drama department at Rhodes University when, in 1970, he gave us students inspiring lectures on such writers as Federico García Lorca and Luigi Pirandello. He was courteous, considerate, never condescending and always prepared to take my juvenile ideas seriously and lend me books from his vast library. After I left South Africa in 1973, we corresponded regularly, then intermittently, for over a decade. I kept all his letters, and when I heard that Leon de Kock had been contracted to write Brink’s biography, I offered to send him copies. The letters cover many topics, including the banning of Kennis van die aand, Breyten Breytenbach’s trial, how his father blackmailed him into not speaking at Bram Fischer’s funeral and the rift that occurred between him and Breytenbach after the latter’s release from prison. But, during the first two years, much of our correspondence dealt with accounting for a mutually beneficial transaction. I sent him copies of prohibited girly magazines, such as Playboy and Penthouse, in exchange for cartons of Texan cigarettes. When I mentioned this to Leon de Kock in an email, he replied on 11 March 2016, wondering “how much one ought to, and how much one wants to, reveal about personal peccadilloes that have little to do with the real substance of the writer’s work”. I suspect he reconsidered his position shortly thereafter, when Brink’s widow, Karina M Szczurek, gave him access to the journals Brink started at the age of 17 and continued writing by hand for the next 52 years. De Kock estimates this to be the equivalent of 11 André Brink novels, almost half his actual output. The writing in the journals is explicit in a way that makes Playboy seem as bland as it really is.

Reading the journals led De Kock to an important decision, and that was to narrow down the scope of his biography and focus on André Brink’s perpetual quest for love. The title echoes TS Eliot’s poem, “The love song of J Alfred Prufrock”, a fragment of which appears as one of the epigraphs to the book. That adds a layer of irony to the title, as the protagonist of the poem is mildly farcical, and the poem itself is by no stretch of the imagination a conventional love song. André Brink’s experiences of sex and love – from the passion and angst induced by his unattainable first love and pen pal, “Martie”, to the peace and contentment he found with his fifth wife, Karina – provide the overarching structure of this biography. De Kock briefly summarises Brink’s childhood, as dealt with in Brink’s memoir, but then quickly moves on to the heart of the matter: André Brink, the writer, writing about his loves, and how these real-life relationships become the stuff of fiction in his published works. It’s a fascinating exercise, and Brink reveals all-too-human foibles and conduct that would disqualify him as a candidate for canonisation. André Brink may have taken himself seriously, but he would have scoffed at the idea of being regarded as a saint.

The relationship between a biographer and the subject’s family can quickly become adversarial. Prior to the 1982 publication of the late Peter Alexander’s biography of Roy Campbell, Oxford University Press presented Alexander with a stark choice: either eviscerate the biography or refrain from publishing it at all. They’d been got to by Campbell’s friend, the litigious and wealthy poetaster Rob Lyle, who had, inter alia, had an affair with Campbell’s wife, Mary, and then married his youngest daughter. Aspects of Alexander’s 1994 biography of Alan Paton were mildly sensationalised in the press, which, no doubt, prompted Laurens van der Post’s daughter, Lucia, to renege on an earlier verbal undertaking to advance Alexander’s suit as her father’s biographer. Her choice, presumably to her eternal regret, fell on her friend and colleague, JDF Jones, whose Storyteller (2001) consigned Van der Post to the dustbin of history as an unsympathetic liar, fraud and sexual predator. I believe it’s possible that Peter Alexander would have led us to a more sympathetic understanding of why Van der Post was who he was and did the things he did. That is the obligation of the biographer, and it’s an obligation I feel Leon de Kock has honoured in this biography. So, it was unfortunate to learn in an interview with De Kock on kykNET’s magazine programme, Kwêla (19 May 2019), that Brink’s widow had changed her mind when she realised he hadn’t written a hagiography, and was demanding that he return the journals. The publisher’s legal team no doubt ensured that the terms of the contract were honoured, and the unexpurgated biography is now in bookshops.

Does this confront us with an ethical dilemma? Does the widow have a right to protect André Brink’s posthumous reputation? If “the truth” is covered up, surely the posthumous “reputation” is a lie. The truth invariably finds a way out, as did the stories about Roy Campbell that Rob Lyle was so anxious to conceal. But there is a difference to consider in the cases involving Roy Campbell and André Brink. Campbell didn’t keep a journal, and certainly never mentioned in letters that his friend had tried to elope with his wife, or that Lyle’s wife, Felicia, had tried to seduce him – or that that had driven him, in a state of drunken despair, to castrate himself. But Brink wrote about everything in his journals, down to meticulously recording his “fiftieth fuck” with Ingrid Jonker. Writing a journal can serve a therapeutic purpose, but if a writer keeps journals and leaves no instructions for them to be destroyed upon his or her death, it’s fair to assume that the intention was for them to be read. That is, after all, why writers write. So, the journals are, in a way, Brink’s literary legacy, and De Kock has quoted from them judiciously and allowed André Brink, in his own words, to share his most intimate secrets with us.

What emerges is a portrait of an exceptional man, with his weaknesses and flaws, but with more than a touch of genius. Brink obtained seven distinctions in matric, had a stellar academic career, spoke several languages – he once told me he had learnt Spanish so he could read Cervantes in the original – and had a prodigious output as a writer. While a young man in Paris, he wrote a weekly column for Die Beeld and translated four novels a month, while finding for an adventurous sex life and documenting that in longhand. De Kock charts Brink’s development as a writer and thinker from the young man who admired DF Malan, to the Sestiger who, along with like-minded Afrikaans writers, challenged the Calvinism and sexual mores with which they were brought up, to the dissident who used his voice in his novels and on public platforms to denounce the inhumanity of apartheid, the consequence of which was being branded as volksvreemd and ostracised by “the tribe”. This journey is dexterously interlaced through Brink’s many sexual adventures, love affairs, five marriages and several extramarital affairs. De Kock makes liberal use of pseudonyms to protect the identity of many of these lovers, as well as one of his wives.

Leon de Kock’s well-judged biography presents us with a complex portrait of a great writer beset by a fundamental loneliness. All the sex, all the affairs and all the marriages were a frequently misguided attempt to end this loneliness. Although Brink was capable of great flexibility in his thinking, for most of his life his attitude towards women was determined by a hopelessly old-fashioned chivalric chauvinism that has deservedly fallen out of favour. He saw women in terms of seduction, conquest, submission and possession. And the irony was that when he’d achieved his goal – and, quite often, that goal was marriage – he discovered that he no longer wanted what he’d come to possess, that he’d possibly never really wanted it and that the quest was more important than the prize. This was the leitmotif of his “love song” for four decades. His fourth wife, although still a student when they became involved, was a feminist, and she was the one who broke this pattern. This, and the therapy he underwent, ultimately led him to a greater understanding of his own pathology, and brought him to a point in his life where he found happiness and peace with his last wife.

In his Kwêla interview, Leon de Kock quotes Diane Wood Middlebrook, author of Anne Sexton: A biography, saying that the purpose of the biographer “is not to judge, but to understand and to have compassion”. This is exactly what De Kock has achieved in The love song of André P Brink. He has pulled off an admirable balancing act by producing a work of scholarship that is accessible and engrossing, and which allows André Brink to speak to his readers in a way he has never done before.