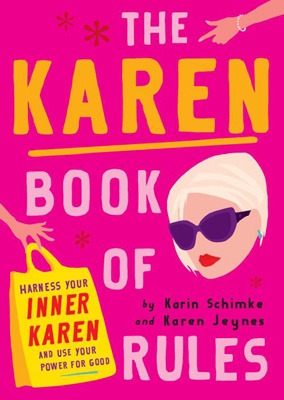 I don’t think any reader, having read The Karen Book of Rules, could feign indifference towards what is called on the back cover a “tongue-in-cheek etiquette guide” — one either loves it or hates it, depending on whether it exposes one as a Karen or not.

“Karen first appeared in public consciousness on black Twitter, in 2014 — a laughable character without any extreme superpowers, whose hair was cut in that way, and who wanted to talk to the manager” (25). “The name really took off when an anonymous Reddit user called Fuck_You_Karen started ranting at his ex-wife, who was called Karen. The account was deleted eventually but Karen had leapt over the great divide that separates the individual Karen from the stereotype karen to be neatly housed in a subreddit called r/FuckYouKaren. That was in 2017” (46). “The internet blew up with memes depicting Karens doing what they’re infamous for — karening. The world needed a word for the familiar spectre of the self-appointed white civilian po-po lady with the shit attitude” (48).

“The cliché karen was a basic bitch who believed herself to be unique in some way. She was privileged, entitled and demanding, and her most distinguished feature, apart from her hair, was her penchant for asking for the manager” (47). Wikipedia states: “Karen is a pejorative term used in the USA for a woman perceived to be entitled or demanding beyond the scope of what is considered appropriate or necessary. A common stereotype is of a racist white woman who uses her privilege to demand her own way at the expense of others.” But honorary Karen Tannie Evita Bezuidenhout says, “Nee, wag ’n bietjie … Just listen to black sisters called Lindiwe, Bathabete, and Nkosazana to name the few. So don’t always blame White Monopoly Karinism. Call it a 2020 personality pandemic!” 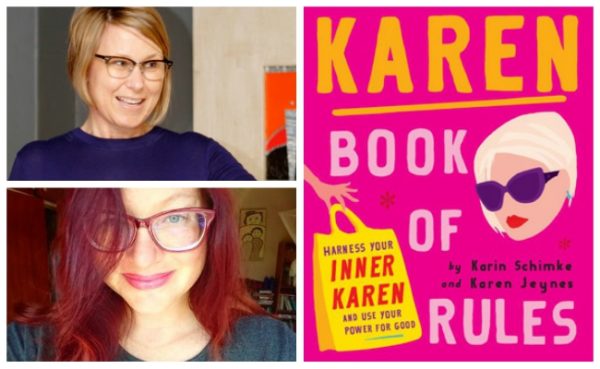 Karin Schimke and Karen Jeynes, both award-winning writers, pull out all the stops in The Karen Book of Rules and have a field day unleashing unbridled wit, humour, satire, sarcasm, and numerous lists of do’s and don’ts on their readers, presenting them with the choice “to be a karen or not to be a karen. Or to state that in a more familiar South African way: how to distinguish between being lekker and being a doos” (19). In the chapter titled “The name Karen vs karen as a set of behaviours” on page 51 the name Karen is said to be “just shorthand for a set of deplorable behaviours … we each have two options: to act like a dick or not act like a dick. If you’re a karen, you’ll opt for the former” as “Karens assume, rant and bulldoze” whereas non-karens “opt for being civil to people always” (51).

Schimke explains: “I wanted to think about how what is horrible about karens can be present in anyone … no one’s written a good old-fashioned book about manners for a while. So here I am, a white middle-aged karen telling you how to do stuff properly.” She approached Jeynes to work with her on this. “I chose her because I have watched for years how she daily decides to be lekker” (19). Jeynes is “firmly of the belief that the same attributes that make karens so hated are the ones that can make karens into heroes” (21).

Karens “believe implicitly and unquestioningly that a single set of rules exists for all the world and all the people and that they are the keepers, the experts and the enforcers of those rules. THEY ARE WRONG” (62). So, how do you know whether you’re a Karen? There is a quiz, “Are you a karen?”, on pages 37–41. “Do you secretly think that you always know what the right thing is to do? Are the people around you a little bit dof, always getting it wrong? Do you yearn to show them all how things SHOULD be done? Yup. You’re a karen” (29). Now that’s out of the way, this book is about harnessing your inner karen and using your power for good. But do remember now: “If you’re unable to harness your inner karen for good without also taking pictures and crowing about it, then you’re not really harnessing your inner karen for good. You’re posing” (37).

Life happens and we all know that there will inevitably be times when we need to complain — preferably like a normal person and not like a karen. There is a handy step-by-step guide to how to complain on pages 56–7. From page 67 the book deals with rules since without rules it would be wild out there. I wonder if Emsie Schoeman — the late Afrikaans doyenne of all things etiquette — would hve agreed that we need good rules and good manners because “People are shit enough as they are — imagine if we had no common ideas about good manners and no rules, whether written or unwritten, to help us all live together” (71).

The publishers hail The Karen Book of Rules as covering “any sticky situation South Africans may find themselves in, with do’s and don’ts for everything from braais, WhatsApp groups and Zoom calls to navigating the queue at Woolies”. It’s one thing to try to be cultured and law-abiding and adhere to written rules, but it’s something else to traverse the maze of unwritten rules and stuff that’s “frowned upon”. “In a country like ours, navigating socially agreed upon rules across class, race, gender, age, location, religion and language requires some sort of advanced referencing system” (79). This softcover publication spans 192 pages and several short chapters written not only by Schimke and Jeynes but also featuring the work of guest authors. From breastfeeding in public and how to behave on social media, video chats and WhatsApp groups to apologising to a boss and accepting an apology, you can bet the The Karen Book of Rules will show you the way. It really sinks its teeth into the mechanics of social interactions and chomps down with a resounding crunch.

As an Afrikaans person I found The Karen Book of Rules an interesting read — cleverly written, funny and suitably entertaining for the most part, but at times I couldn’t help but suspect that I detected a somewhat condescending tone between the lines … or maybe it’s simply a question of a few home truths hitting squarely where they were meant to hit. The authors shoot from the proverbial hip and don’t mince their words. Perhaps all of us have a little bit of Karen inside of us. For me, the message of the book boils down to having respect for myself and others and realising the world doesn’t revolve around me. Playing the Privilege snakes and patriarchy ladders game on pages 150–5 opened my eyes to the fact that I’m indeed privileged, and with the realisation came the sense of responsibility to mind my weaknesses, use my strengths for the greater good, and “be present in this world full of people and take up the space (I) we deserve (no manspreading) and use it intentionally” (192).