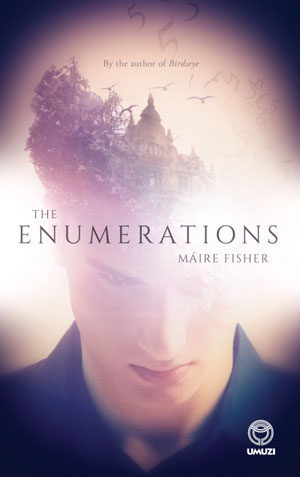 Noah Groome is a teenage boy with obsessive-compulsive disorder. He comes from a well-to-do family in Cape Town. His father is a successful economist and his mother is a busy home executive. He has a close relationship with his sister Maddie. He has always been an unusual child, with a special affinity with the number five. After experiencing a hijacking outside their home, Noah’s OCD goes into overdrive. He is drowning in guilt, as he feels that he failed to protect his family. He begins to obsess over what clothes to wear (a particular make), which colours are safe (blue, only blue) and which ones to avoid (red and black), and every single minute of his day has to be accounted for. He has colour-coded timetables, and counts his steps in groups of five, counts using each finger, sometimes whispering the numbers, and keeps five pebbles in his pockets. Noah is a prisoner of his mind.

Socially, school has never been particularly easy for Noah, but he performed quite well academically until his condition took over his life, and it is now virtually impossible for him to be productive; he struggles even to get to class on time, because if he doesn’t do things exactly in the way that he needs to, he has to start all over again, checking, counting and checking again. This makes him a target for bullies as OCD manifests in behaviour that is out of the ordinary. One of the main school bullies picks on him, and Noah breaks his arm. The parents of Kyle, the bully, launch an offensive, and the school, in a bid to keep peace and possibly to protect its reputation, strongly advises Noah’s parents to look into putting him into some kind of rehabilitative care.

This leads to his institutionalisation at Greenhills, a psychiatric home that has a special wing for adolescents. Without Noah at home, his mother, Kate, is feeling lost and as if she has failed her son. The family had had to make many allowances for Noah’s condition. It had reached a point where he couldn’t eat with them, because it violated the order that the ruler of his brain insisted on. A violation of order would result in untold horror and pain for his family, the ruler said, so order was a form of protection. Noah’s behaviour has also alienated his father, Dominic, who doesn’t seem (or want) to understand his son’s pain.

Noah’s obsession with his family tree began before his stay at Greenhills. He has managed to trace his maternal roots to the Huguenots, but his father is not forthcoming. There are no parents, no siblings – nobody. This causes Noah a lot of discomfort. It is not just about there being order, but knowing his roots would also provide him with a greater sense of belonging. One of the patients at the facility is a schoolmate, Juliet, who is notorious for her perceived sexual precociousness. This is not her first stay at Greenhills. Her father is verbally and psychologically abusive towards her mother, who turns to alcohol to numb the pain. Juliet is very talkative and won’t leave Noah alone, although she doesn’t pester him in a sexual manner. It is not clear why she is so demanding of his attention, but not only does she prove to be an ally and unlikely friend, but their relationship also contributes to both of them finding a path to healing.

In The enumerations, Máire Fisher uses story to draw the reader into thinking about mental illness in a holistic way. Mental illness is especially sensitive to psychosocial dynamics. Fissures in the family, bullying and the violence to which many are exposed in South African society are powerful triggers. Mental illness affects the family unit because the patient’s suffering brings up complex emotions – parental guilt and sibling protection, among others. In Noah’s case, it presents a real threat to Kate and Dominic’s marriage. Fisher also criticises the cruelty with which particularly middle class suburban mothers treat each other. The tribe of tiger moms can be vicious and exclusionary, and the mothers to two schoolmates at Greenhills are targeted for their children’s behaviour. The double standards of prestigious schools when dealing with bullying are also exposed. In the pristine suburbs, there is also pain that hides behind the facade of respectability.

The enumerations is written in the third person, observing how the protagonist and the people around him evolve or deteriorate as the plot progresses. It is a story that is written in a gentle manner, even though the viciousness of Noah’s OCD is striking. It is a story about relationships, and how toxic ones can break the mind and spirit, while safe, nurturing relationships can offer healing. The plot is well structured, and Fisher also manages to run a parallel plot in a different time to the central story. The two come together as part of the climax, leading to the resolution. The ending may be a bit on the tidy side (no spoilers!), but it is not unrealistic about mental illness as a condition that needs constant monitoring and support. This is a triumphant, hopeful work of fiction, and Fisher deserves commendation for writing about such a difficult, stigmatised topic in a creative and gripping way.