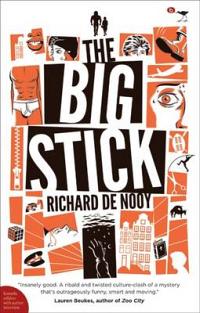 Click here to buy The Big Stick from Kalahari.com.

The Big Stick is South African-born Richard de Nooy’s follow-up to the acclaimed Six Fang Marks and a Tetanus Shot, the second part of what the author terms a “loose trilogy”. It is sure to gain this distinctive voice more than just a cult following.

Alma is determined to uncover the truth of her son’s death, searching for closure after her own mistreatment of Staal, desperate to understand her estranged son’s wide circle of lovers, friends and acquaintances. Her only certainty is that all loved Staal, and that her own beliefs will come under scrutiny on her journey towards redemption.

A coke-dealing Rastafarian guides Alma on her subterranean quest for illumination, echoing the writing of Jonathan Saffran Foer, incidentally one of De Nooy’s favourite writers. It would be remiss not to note the way that the English rewriting (rather than mere “translation”) of Zacht als Staal – “Soft as Steel” – results in a different texture to the novel’s brand of humour. As is the case in Saffran Foer’s unusual work, De Nooy generates a consistent, fantastically contrived barrage of laughter through the gaps in communication and language between characters. With the brevity of the novel (around 160 pages), almost every moment of witty banter or miscommunication between Alma and a variety of endlessly amusing characters is to be savoured. To expect the novel to reproduce the kind of verbal fireworks between English and Dutch characters in the search for common ground and understanding might be a tad unfair.

Despite its warm-hearted embrace of the humorous side of life amid seediness and misguided cruelty, The Big Stick delivers a penetrating exposé of alienation, ignorance and fear. The novel renders Staal’s exploits in the Netherlands in neon-vivid detail and with unflinching emotional candour, while Staal’s childhood and coming out in a conservative South African community rings with authenticity.

De Nooy’s deal is an idiosyncratic brand of bittersweet irony. He is as much a merchant of the tongue-in-cheek as a purveyor of emotional complexities in writing (in all their messy glory). Naming his central character Staal is clearly an ironic play on the signification of masculinity, toughness and hardness that the word implies, but also casts the net wider, drawing our attention to the ways that a clinical, detached approach to the complexities of queerness would sell the novel short.

Let us not beat about the bush when giving a verdict: The Big Stick is as irreverent, cheeky and compulsively readable as a novel about estrangement, exile, isolation and loss can be. De Nooy’s study of queer power relations, embodied experiences and male intimacy is sensitive, filled to the brim with an exuberance of voice, and boasts a mesmerising confidence in the feel for dialogue and relationships. The Big Stick is not a book that panders to simplicity or condescends to its readers, and neither does it offer one-dimensional exposition or simplistic moralising. It shows a level of respect and measure of compassion towards its characters that ultimately makes them very real to us.

What sticks with you when you read this fine novel (and afterwards) is the seemingly effortless way that De Nooy constructs his deceptively complex study of sexuality and identity politics. Although the large cast of characters and the repeated shift in focalisation and tone may take a while for some readers to get used to, these constant shifts effectively foreground the way that subjectivity and memory are always unsettled and obscured by layers of interpretation and mediation. De Nooy’s subjects remind us that life is as much a work in progress as it is an ambiguous course down both teeming highways and barely-lit back alleys, challenging, uncertain, and rewarding. Staal (and indeed De Nooy) exits the novel speaking softly, but carrying very big sticks.