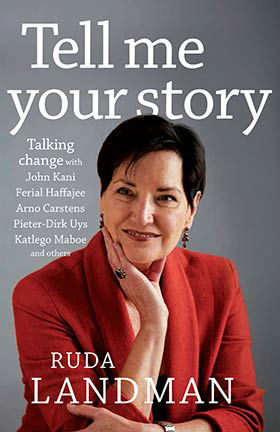 In Tell me your story, Ruda Landman has created nineteen individual stories of South Africans that together form a much more substantial narrative of our country under democracy. Each person tells a different story – their own. Each story starts from a different past, and each occupies a very different present at the time of the interviews. Landman presents this as a collage: rich, varied and proudly South African.

The book opens with a quote from Anton Rupert: “Here my life makes a difference.” Rupert said that in response to the question: Why would he choose to remain in South Africa while his business empire was much bigger in Europe?

Making a difference would become the common thread in Landman’s book.

To each of her subjects, Landman asked: Tell me your story.

The last interview in the book is with tongue in cheek, and one that Landman did with herself.

Since the book is representative of all races, a variety of cultures, most religions and a fair range of age groups, the reader is treated to a number of colourful, multilayered views of our country. Each of the interviewees had achieved success by the time the interviews were done, but most grew up under difficult circumstances; success came through hard work and perseverance.

Poignantly, we get to read the words of a bright-eyed racing star, Gugu Zulu, in an interview which took place about a year before his death. The adrenalin and passion are tangible. Then, eight months after his death on Kilimanjaro, his wife, Letshego Zulu, was interviewed by Landman. While Gugu’s name was often mentioned during Letshego’s interview, Landman allowed her to become her own person with her own story.

In each narrative, Landman manages to go beyond the public persona. I was struck, for instance, by the number of people who spoke to Landman about their children. Since I am a father, this resonated with me. Anton Harber’s views on raising children differed from those of Dineo Ndlanzi, and Wouter Kellerman’s experience of caring for his offspring would differ from that of Khanyisile Motsa, but each had a story to tell.

Since these stories are so deeply personal, the reader could fill in a backstory on many of these public figures. For instance, this reader had known about Esmaré Weideman as a businesswoman, the success story behind the large weeklies Huisgenoot, You, Drum and, later, Network24; but, somehow, her earlier life as an Afrikaans girl who joined a group of ANC cadres in disarray to follow Nelson Mandela around on his first trip through Africa after his release from prison, was news to me.

John Kani wanted to join the ANC, and would have, had his father not been drunk on a rather fateful night; he became an actor, instead. Tannie Evita got named by accident.

I mentioned a few of these nuggets to my partner, who had made it quite clear that she would not have time to read the entire book; but, since she had always been a huge fan of Wouter Kellerman, I suggested that she should read at least that one interview. She did, and loved it. There were so many things we did not know about him, despite being fans.

Landman allows the stories to flow, to meander between the present and the past. Her own voice is present to comment and to guide the interviews, to clarify and to draw parallels with her own life, without being obtrusive.

All the interviews, apart from the one with herself, were first done on camera. Some were made for the Change Exchange, and others for the kykNET programme VeranderDinge. Eighteen of them were then transcribed and loosely edited to create this book. Now, one can read them, ponder upon each, and read them again.

Tell me your story, published by Tafelberg, is a great read. I have already bought a second copy that I want to give away.