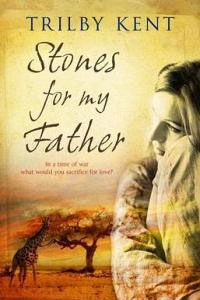 Click here to buy Stones for my father from Kalahari.com.

Growing up in the harsh and newly carved-out Transvaal during the Anglo-Boer war isn’t easy for anyone. But for a young girl who spends her time trying in vain to gain favour with her mother it’s even harder. Coraline Roux desires nothing more than her mother’s approval, though it seems this is the last thing she will achieve. Her mother favours her golden-haired sons, Gert and Hansie. Corlie’s skin is fair and burns easily in the African sun. Her hair has glints of red in it. Her father’s affectionate pet name for her is “Rooineusie” because of her propensity to peel after sunburn. However, the similarity to the more abusive “Rooinek” doesn’t escape Corlie. After all, they are locked in a bitter battle with the English.

This novel is set during the time of the Second Boer War. which raged from 1899 until 1902. Britain sent commonwealth forces of over 150 000 men to take back the land she viewed as part of her Empire. Over 22 000 British soldiers were killed during those three violent years of what was dubbed the last great imperial war. The relative success of the Boers’ guerrilla warfare may have made it seem as if they came out of the war better, with their losses numbering only 7 000 fighters. However, Britain’s “Scorched Earth” policy ensured that the Boer farms were razed to the ground wherever possible, and women and children were interred in the first ever concentration camps scattered around the then Orange Free State. The death toll from these camps was alarming. More than 26 000 women and children died there from starvation and disease. Although African soldiers, too, gave their lives on both sides of the campaign, there are no firm figures for their losses. It’s estimated, however, that approximately 20 000 African men and women lost their lives during this bloody war.

Corlie and her brothers spend their days doing their chores, such as fetching things for their mother from Oom Flip se Winkel nearby, and other minor tasks which keep the farm ticking over in the absence of men. While they do their chores, Corlie entertains Gert with her imaginative stories, all of which annoy her mother.

All the older men of the Boer families in the small community are either fighting on commando or have already been killed. The children wander fairly freely around their farm, which seems to have escaped the interest of the Engelse. Their father, one of the Bittereinders, those who refused to give up and become a hensopper by surrendering to the British was killed in combat.

One of Corlie’s firm friends is Sipho, the only son of the farmhand Bheka. Bheka too, had gone to war with the rest of the men from the farm. The two children share stories; Sipho’s are about the San, and Corlie’s are about Piet Retief and the covenants he made with God.

One day Corlie and Gert stumble across a Canadian soldier on one of their excursions into the veld and are surprised to find his cool gaze is gentle and non-threatening. For some reason, Corlie feels reassured by the man, who offers the children some of the buck he has killed to eat. She takes back a small haunch of game, but swears her brother to secrecy, knowing her mother would never eat the meat if she knew it came from an Englishman. She remembers his name, and never dreams she’ll use it as a safeguard later on in her short life.

It’s inevitable that their farm, too, comes under attack. The ordinariness of their daily life is destroyed forever when they are transported to a British concentration camp near Kroonstad. There Sipho encounters the wrath of both the Boer men and the British soldiers in charge of the camp. The last sight Corlie has of him is when he is dragged off by soldiers to be punished for a crime he’d committed after being brutally beaten by one of the older Boer men.

The scenes in the concentration camp are brutal and realistic. The smells of putrefaction and starvation seep through the pages and Trilby Kent shows that she has done her research well. When Corlie’s mother watches her beloved son Gert die of typhoid, the scourge of the underfed children in the camp, she turns her bitter disappointment and anger on her daughter. Corlie is banished from her mother’s tent and sleeps under a wagon most nights. Nursing her intense grief at the loss of her beloved brother, starving without even the minuscule daily rations to get by on, Corlie is forced to beg for scraps. When she recites the name of the Canadian Mountie she’d met in the veld, a British soldier takes pity on her.

Somewhere through the delirium of her life as an outcast she learns the reason behind her mother’s disgust at her very existence. She finds that the enemy is not as removed from her as she once thought.

Kent has written a very readable novel which recreates with thoroughness and accuracy the world of the Second Boer War. It’s chilling in parts to learn of the intolerable cruelty inflicted upon women and children in this war. The death tolls from starvation and disease within the concentration camps alone are heartbreaking.

It’s important to remember that the losses suffered in this country’s bloody history cross all cultures. Interestingly enough, Trilby Kent doesn’t live in South Africa, but has relatives who do. On a visit to the country in 2007 she found herself drawn to this aspect of South African history and was amazed that more hadn’t been written about it. She’s done her research well and has added a valuable contribution to the canon of South African writing. This novel should be available in every school library, if not prescribed as a set book for English or history students.