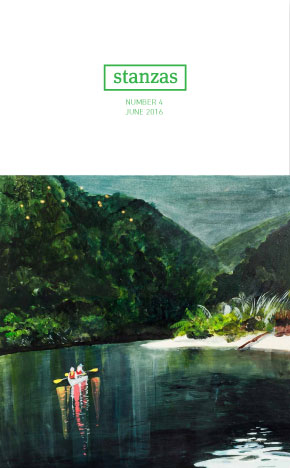 Poetry is balm for the soul. Even when touching on rough or depressing topics, there is something about the distilled, focused, observant quality of the form that brings comfort. Stanzas is a poetry quarterly featuring established and emerging South African writers, as well as local and international poets in translation. Publishing predominantly in English, it also includes translations into and from Afrikaans. It promises “an open space where poetry matters”, and offers a versatile selection of voices.

Any conscious language practitioner will know how heavily loaded words can be. Language is a record; every word contains a universe of memories. Poets have the ability to draw on that wealth and create snapshots of time and place, people and emotions, where whole worlds collide to hold diverse images in their manifold constellations.

The opening poem of Stanzas No 4, “Kung Fu” by Fiona Zerbst, encapsulates a distant image of woman friends spending time together after Kung Fu classes. Changes in the architectural landscape of the setting reflect the passing of time and a sense of broken promises. In Zerbst’s “June”, the titular month holds a bitter-sweet memory

of berries in the veld,
their dark-red
poison split.

The Zanzibar leopard and the Java tiger exist only in Zerbst’s “Extinction”. And her “Language” captures silence and its potentially lethal meaning.

CJ “Jonty” Driver writes about a visit to Noordhoek Beach in “Sunset & after”: “The point of being here is not revealed.” The place continues with its own rhythms even if one is not there to witness it oneself:

Although I may be far away. The tide
Will wash away the prints and someone else
Will walk this beach to watch the setting sun.

Poetry is about noticing:

So fluent, so expressive, yet wrought (as so much real
feeling is) from anguish, from pain and desperation,
back through flame and furnace into simple warmth

Too many things escape our limited attention spans, but reading poetry can restore to us a certain awareness of the world. It can allow us to see “what’s left of wing and feather and flow” when a dove dies, as in Adré Marshall’s “Crash”; or to witness, in her “Lost”, written in December 2015 on Lake Kariba, a scene pregnant with history, myth and meaning:

Cold to the bone, they climbed on deck
to eyes that went on staring past
them at the depths, the blue-black depths
where Nyaminyami, the river god,
still waits with drowned ancestral graves.

The atmosphere in Medzani Musandiwa’s “First impressions” is more casual, everyday, but loaded with as much historical baggage. Two men observe each other during a bus trip from Sibasa to Gauteng, but only one of them is fully conscious of what is developing between them, amazed at

…how freely people
Speak in their mother tongue
Over the phone (to the unlearned,
It’s structured gibberish, of course):
“…next to a darkie. It’s like he’s
‘Waiting for better days’
That are NEVER gonna come.”

In Musandiwa’s “Filter, please”, campus memories are evoked with the smell of coffee. “Skipping in Grahamstown” by Chris Mann captures the image of a girl skipping “along a history-tethered street” with “its littered, sewage-tainted clay”. Mann’s “Wren” opens with a graveyard scene and ends in a bird’s nest, describing the miraculous life cycles of the universe – “a feathered speck of energy/ out of which the stones were made” – in only seven stanzas. “It is a short step/ From rigour/ To rigor mortis”, writes Moira Lovell. Indeed, the leap can be surprisingly short. And what remains might not be much, but:

There’s little, I know, to offer me these days,
Lost in time that’s slow and taken from me,
Though you are gone, and I count my days

(from Marco Fazzini’s “Alla luna”, translated as “To the moon” from the Italian by Douglas Reid Skinner).

Musings about death define Richard Cowling’s “My wake”, and renewal is found in his “Go gently”:

Leave behind the vicious vines
That entangle you here.
Breathe the new air deeply in.
It’s time to grow again.

words of poetry
on a page,
colours splashed
across the day.

What joy to have one’s days brightened thus! The high aesthetic quality of the work presented in Stanzas will satisfy any poetry reader’s heart.

The latest volume of Stanzas (No 6) also includes a few short reviews of recent poetry collections. In one of its poems, The silent fox, also by Medzani Musandiwa, we encounter this image:

Yet, try as we did,
the beautiful, agile
creature eluded
extinction and
supposedly
still roams the woods,
slippery
in the mind.

Not unlike poetry itself.

Edited by Patricia Schonstein and Douglas Reid Skinner, and published by African Sun Press, Stanzas is a vibrant and vital contribution to the local poetry scene. Any reader’s soul will delight in a subscription to the quarterly, which I can wholeheartedly recommend.