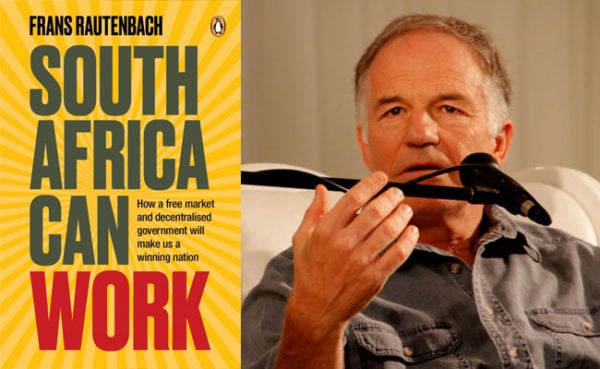 In the midst of what seems like a doubling down of authoritarianism by the South African government – from draconian proposed limits on free speech in the Hate Speech Bill to expropriation without compensation – an antidote arises: a blueprint and vision for a successful and open society. All it takes, simply, is freedom. Freedom from the dead weight of government, and its political allies, pressing down on our collective shoulders.

This is the fundamental message Advocate Frans Rautenbach wishes to convey in his new book, South Africa can work. The title of the book contains two possible meanings: institutionally, South Africa as a society can succeed; and the disastrously large number of unemployed in South Africa can gain employment with relative ease.

The book opens on a sombre note, with Rautenbach acknowledging something free-market individualists are often at pains to do: white privilege exists. The end result of more than three centuries of white supremacy is “whites enjoying the privileges of whiteness, and blacks playing second and third fiddle”. It is evident, however, that white privilege is not South Africa’s problem – black underprivilege is South Africa’s problem, and it is a catastrophic problem that has manifested itself in a poverty-producing unemployment rate of 35,6%.

The biggest theme running throughout the book is the destructiveness of rent-seeking. Rautenbach defines rent-seeking as “exploiting social, legal, or political conditions in order to gain a benefit (‘rent’) from a public or other resource that the perpetrator otherwise would not have gained without commensurate productivity on his or her part”; in other words, “getting something for nothing”. Not only is rent-seeking deleterious when it comes to the economy, it also “leads to unhappiness among those who do not benefit from the largesse”, as they need to work for what they have while others “gain effortlessly by exploiting ‘the system’”.

The opposite of rent-seeking is the “merit principle”, where workers are paid in accordance with their productivity, government contracts are given to the most cost-effective tender, and students get marks reflecting the work they did, not the objectives of education authorities. The free market system, furthermore, is the “bulwark against rent-seeking”, and is described as “an economic system of voluntary exchange of goods and services rather than through the dictates of government”.

The forms of rent-seeking that most reasonable people can agree are bad are tenderpreneurship, cadre deployment, state capture and everyday crime. One could add the rent-seeking behaviour of large corporations, which often benefit from red tape at the expense of their smaller competitors, to this list. But then, there are also rent-seeking institutions that are sanctioned by law and which we are told “serve the greater good”. Examples of these are asset inflation by central banks (printing money, which leads to a decline in the value of money already in the system), black economic empowerment and employment equity, South Africa’s disastrous labour laws, state welfare and education, and free housing.

Rautenbach does not blame the poor, to be sure. “They want to work and get on as best they can. They are or want to be makers,” as opposed to takers. But, due to the rent-seeking system in place, they can’t. An example of this problem comes in the form of South Africa’s 9,4 million unemployed “who fruitlessly knock on doors because other people get rent in the form of union premiums, strike benefits, minimum wages, inflated stock markets, government jobs, and unproductive employment equity and BEE”.

One of the downstream consequences of affirmative action has been South Africa’s broken education system. “In the 1990s, the government replaced thousands of white teachers in the name of affirmative action. The rest, as they say, is history.” This state of affairs is not unjust because of what happened to displaced white teachers; it is unjust for what it did to the destitute poor black majority. (Rautenbach dedicates a full chapter to education: how South Africa ended up with one of the worst education systems in the world, and how to fix it.)

The dubious history of minimum wages in South Africa is also given the spotlight in South Africa can work. In 1925, the white Mining Regulation Commission lamented the fact that white miners were being replaced by black miners, who offered cheaper labour. The commission concluded that it must “rescue the European miner from … advancing native competition”, and the way to do this was a minimum wage that ensured blacks couldn’t get jobs by undercutting the price of white labour. Similarly, today, minimum wages and extensions of collective agreements to non-members make it difficult for the smaller and more vulnerable players (often the unemployed) to compete with the incumbents (the employed).

The large body of evidence supporting the superiority of the free market to rent-seeking has been ignored, not least by commentators and politicians who “treat the free-market system with disdain”. Rautenbach laments that it is apparently “‘cooler’ to follow some form of social democracy or other statist economic doctrine”. “Cool,” writes Rautenbach, “but delusional”.

The Economic Freedom of the World index that is produced annually by the Fraser Institute in Canada is a clear indicator of how prosperity and free markets are entwined. The average GDP per capita in the world’s least free-market regimes was $5 471 in 2014, whereas it was $41 228 in the freest. Even the poor are better off in economically free environments. The poorest 10% of the population in the least free regimes earned $1 080 annually, whereas had they been in the freest markets, they would have earned $11 283 – a tenfold difference.

Rautenbach pre-empts his critics, expecting the usual rebuttals to the superiority of the free market. He debunks the myths that the Great Depression (1929) and the Great Recession (2008) were caused by free markets and a lack of regulation; he argues that income inequality – if conceived of as a problem instead of a natural phenomenon – is caused by state interference in the market; and he debunks the notion that a free market would destroy the environment.

He also argues for, essentially, a free market in politics, in the form of radical decentralisation. “[T]he best decisions are taken when people have the greatest degree of power themselves either to take decisions or influence them.” Referendums on issues and legislation, the power to recall politicians (by their constituents, not party bosses) without waiting for elections, and devolution of power to lower levels of government are among Rautenbach’s suggestions.

In principle, a bargaining council is socially just: “It is perfectly fine for a group of employers and a group of trade unions to form a club, called a bargaining council.” The problem arises when this affair becomes involuntary, when this “club” says, “If you are not able to comply with the rules of this club, you may not be in business at all,” even if you never tried to join the club. This rent-seeking is the consequence of Section 32 of the Labour Relations Act, which compels the minister of labour, at the request of a bargaining council, to extend collective agreements to non-members – parties that were never involved in the negotiations or in the council itself.

How, then, can South Africans start to emancipate ourselves from the rent-seeking system that oppresses us? Rautenbach recommends “focus areas” where South Africans can be convinced of the superiority of free markets.

The first is education. The state must relinquish its role as a manager of education and simply become a funder, leaving the real work to those who have proven themselves capable – private entrepreneurs.

The second is affordable housing. South Africa’s unemployed should be hired by private construction firms to build their own homes, but exempted from the applicable labour law. In other words, “building costs are defrayed by persuading prospective homeowners to pitch in their own labour at a reduced, market-based rate” – employment and the creation of housing at the same time.

The third is free-market zones – like China’s special economic zones – which serve “as experimental laboratories of market freedom, providing the essential evidence required to convince the public at large of the benefits of a free market”. In these areas, businesses and people will be exempt from intrusive red tape.

To learn more about this campaign, visit South Africa Can Work.

If you are not already convinced that free markets are what will rescue South Africa from its current quagmire, South Africa can work will be a difficult pill to swallow, and will downright offend you at various junctures. But, if you are looking for a level-headed, common sense cure to South Africa’s ills, complete with statistics, data and innumerable cited research studies, Frans Rautenbach will not disappoint.

Martin van Staden is legal researcher at the Free Market Foundation and is pursuing a Master of Laws degree at the University of Pretoria.