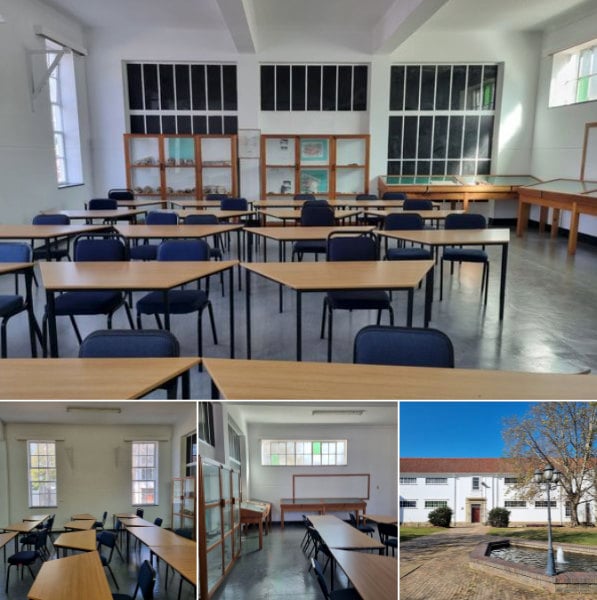 Slightly melodramatic thought for the day, in cynical times.

When I arrived at Fort Hare a bit more than four years ago, one of the first things I wanted to see was the teaching venues. Our department shares a teaching hall with a number of others, in a beautiful neoclassical building called Henderson Hall. I noticed that there was no furniture, apart from display cabinets with fossil skulls and other archaeological museum pieces (topic for another day). I was told that someone had left the door open over the December break and students had taken the chairs and desks to their residences, where they had to squat many per room due to a shortage of accommodation. In the venue itself, the curtains were torn, the floor was broken, paint was peeling off from the walls and ceiling.

This was not a dignified space to teach in.

Like much of the campus, the place felt neglected.

My colleagues made a plan, though, and wangled perfectly good tables and chairs from one of the support service departments that had been upgraded.

We still use these hand-me-downs as furniture in our venue and take care to keep the doors locked.

Since then, the new university management has built almost 1 500 new residence rooms as a way to address squatting in the residences.

During lockdown, all our teaching venues were renovated and I am proud to say that when we return to our class rooms after the July break, we’ll be teaching in a context where staff and students can experience a sense of dignity.

Much remains to be done, but it shows what can happen when an institution is uncaptured. In all of this I play but a minor part, I merely teach. There are other colleagues who have had to duck bullets in assassination attempts, and a colleague appointed to clean up a service department paid for this with his life. Those who survive take physical and psychological body blows, are vilified, slandered, and accused of the very corruption that they are rooting out.

Last week the University got its first clean and unqualified audit in many, many years.

One lesson: When corruption taps are closed, it takes a long time for systems to start functioning again. Maybe another: Capturers don’t give up without a fight.

I feel for Eskom’s management – please be careful with cynical armchair criticism. Brave people put their lives at risk to turn things around.