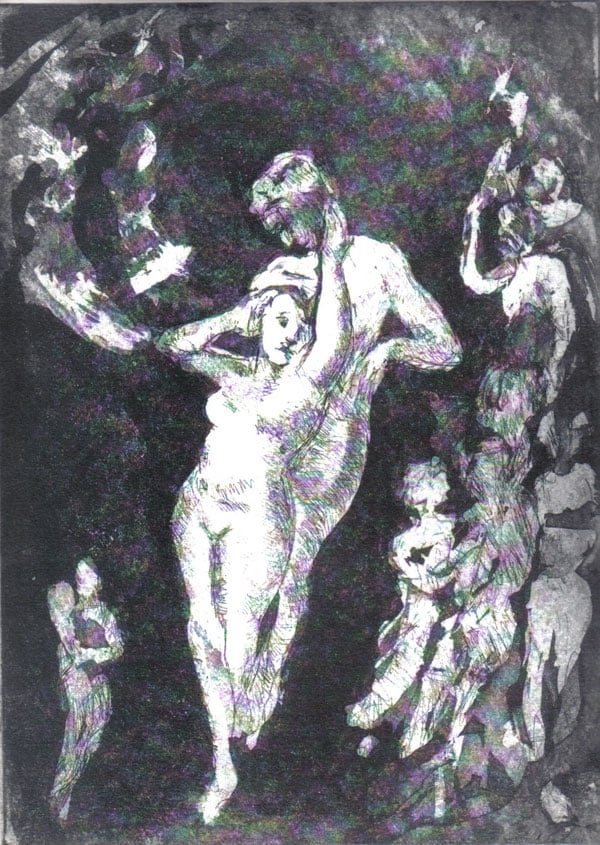 I wanted to start this introduction to Mimi’s exhibition in Afrikaans, but as we have some guests from abroad I shall use English.

Mimi, in any artistic activity you already start with an advantage: with such an alliterating name: Mimi van der Merwe.You were born, so to speak, with a nom de plume! And very soon the plume became an artist’s brush which swept you along on your career.

When I walk into an art exhibition I try to have my eyes and my mind wide open, guided by the question: What is art?

And lingering in the background: What is “good” art?

Every time I hope that the artist will enlighten me through his or her work in order for me to reach a better understanding.

My first impression on being confronted with Mimi’s exhibition is that this is a mature, established, artist who has found her space in the landscape of visual art. There are no superficial quirks to attract the attention with “novel” or shocking gimmicks.

Mimi’s general field is etching – a small word covering a rich variety of rather complex techniques. I shall not list or describe these now, but the exhibition is a veritable demonstration of the broad, diverse field of etching. Mimi will explain this in the walkabout on Saturday morning, May 10th, and it will be an excellent introduction to the field.

What is important for this evening is that Mimi is a master of her medium: she has clearly developed her vocabulary of form and colour and texture; and she uses this to communicate visually with the observer. Yes, she appeals to one’s aesthetic sense, but she goes beyond the pleasurable sensation to capture hidden characteristics of people and places; she expresses feeling and emotion.

In Antoine de Saint-Exupery’s inspired book, the fox tells the Little Prince: “Voici mon secret: on ne voit bien qu’avec le cœur; l’essentiel est invisible pour les yeux!” – “Here is my secret: one only perceives well with the heart; the essential is invisible to the eyes.”

The exhibition comprises five sets of etchings – part of the reason Mimi calls it Varied Editions.

There are four works inspired by Dante’s Journey through Inferno, the first of three parts of his Divine Comedy. Kobus Kruger spent six years, although not full-time, translating the Inferno from Italian into Afrikaans.

Here is the book: a monumental achievement. There may still be a few copies at Protea Books.

Mimi was challenged to contribute a visual dimension to the translation, and she created five etchings, using the traditional technique, as well as 34 ink-and-wash drawings, illustrating events in Dante’s journey.

Feel the exultation as Dante and Virgil reappear from Inferno and reach for the stars!

If you are not seduced by the seductive woman you need counselling!

And Mimi succeeds in conveying these emotions merely with black lines and mass on white paper, playing with the tonal values!

As I said, only four are being exhibited, but Mimi has more available here with her.

There are a number of works inspired by a tour to India. For these she used the Chine Collé technique. One etching shows the inside of the train station at Varanasi – according to Hindu tradition a favourable city in which to die, if you must. This station scene also appears on the invitation card to this exhibition. You will be surprised, Mimi, that this work somehow reminded me of the caste system in India. I guess it was not intended by you to do so.

Mimi’s sketch book of impressions during the tour to India is available here. It is instructive to see how she captured her first impressions and how these later evolved to the final etchings!

For another set of etchings she used the Hayter viscosity technique – inter alia the three versions of the Town Scene. Expose yourself to the dynamic visual interaction between human and canine figures. There are three versions of the same base pattern, with slightly different colours. It is intriguing to sense how the different colour versions convey a different feeling. Let the Tsunami sweep your mind along. Experience the Dance in Water. One gradually gets lured into the work, as if you are relating to an archetype which Mimi has uncovered from the collective subconscious of humanity, as described by Karl Gustav Jung.

I differ from Jung on where the collective subconscious resides: I shall come back to this in a moment.

What is it in such works of art that moves the sensitive observer? I want to explore this by initially referring to the Golden Section, discovered by the ancient Greeks. As you all know, they found that certain proportions of line lengths are more appealing to the aesthetic sense, and they applied this to architecture and in art.

Another Gustav, namely Gustav Theodor Fechner (founder of experimental aesthetics) investigated many successful paintings to ascertain whether aspects of the Golden Section are subtly present in the painting in order to explain its appeal. Where this is the case the question arises whether the artist consciously applied the Section, or whether he did it instinctively by his feeling for form.

I gave this short reference to hidden structural elements, such as the Golden Section, to test an idea on you: I want to generalise on this possibility that there are subtly hidden elements that determine the success of a work of art.

I challenge you to make a quantum leap in your thinking!

Let us take Plato’s Theory of Forms seriously. In the European tradition this is referred to as the Theory of Ideas (“Ideëleer” in Afrikaans). Plato struggled with the dichotomy that this material world in which we live (and which we experience through the senses) is a world of becoming, of movement and change, whereas truth, and knowledge and beauty are absolute and permanent. To accommodate this eternal truth and beauty there must be an ideal domain, or dimension, where the ideal reality exists. What we perceive here in the material world are mere adumbrations of the ultimate reality. They teach you in philosophy classes, rather oversimplifying, that in the ideal domain one would find the ideal horse or tree; here we have only imitations of the ideal versions. But surely for Plato it must have been about more than horses and trees and other objects – the construct must also have applied, and more particularly so, to ideas, concepts, poetry and works of art!

I want to suggest that the valid artist, sensing the ideal, or as some would say, inspired by the Muse, in creating his or her work of art, strives to reach towards the ideal form.

If he or she strikes the ideal form the work resonates with all sensitive observers across the world and the centuries. Dante achieved this with his Inferno of 14 000 lines of verse, created in about 1300 AD, and still echoing, today even in Afrikaans, thanks to this book. And there are numerous others, such as Leonardo da Vinci, and Rodin, Beethoven, and Shakespeare, Goethe, to mention but a few who have created works of lasting impact.

I return to Jung and his archetypes: he induced patients to reach back in time to the distant past and uncover striking patterns which he called archetypes, such as mandalas. He postulated a collective subconscious, thinking that it somehow resides in the deeper recesses of the brain. Jung worked before DNA was discovered. The only scientific way in which information from past generations of humanity could reach a present-day individual is by means of the genetic code. We know that DNA carries a tremendous amount of complex information: our whole biological programming, including our mental capacity, abilities and traits of character. But surely it cannot bring the totality of the cultural heritage of all a person’s predecessors to a present-day individual! I venture to suggest that these archetypes are out there, in Plato’s world, in the other dimension. I wonder whether Jung tried to induce patients to reach for ideal forms in the present.

The exhibition space behind me is known as the Black Box.

Mimi, the extent to which you achieve resonance with the ideal forms and archetypes with only these 37 works on exhibition make the Black Box explode with emotion!

How did you develop this ability? Besides being born with the nom de plume and the artist’s brush?

Mimi studied art at the Universities of Stellenbosch, Brussels and Paris, where she spent two years during the sixties at the École des Beaux Arts for traditional etching methods. In 1997 she again spent three months in Paris at the Cité des Arts, working in two etching studios. Since 1983 she has had her own studio and art school: the Tait Modern in the street of that name in Colbyn. She has had numerous successful solo exhibitions.

Pieter van Heerden, I want to use this opportunity to congratulate you on the dynamic way in which you animate this gallery and the Art Association. I also commend you for the sensible and sensitive way in which you curated this exhibition, given the limited space available.

Thank you to Nandi for being the efficient portal for us in communicating with the Association.

Mimi, I trust I have opened your exhibition. I invite you all to enter Mimi’s visual space; but please remember the secret of the fox: you must perceive with the heart; the essential, such as Plato’s ideal forms, is invisible to the eyes!