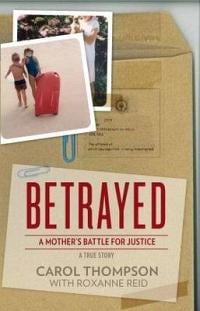 Click here to buy Betrayed: A Mother's battle for justice from Kalahari.com.

It is said that parents should never have to bury their children, and that the anguish of such a loss is virtually impossible to describe. Carol Thompson, mother of the deceased Tracey, has done just that with Betrayed – A Mother’s Battle for Justice – where she offers far more than just a glimpse into the private pain of herself, her husband Buddy, and her son Glen.

At face value, Thompson provides a devastating account of the mysterious circumstances that (still) surround the disappearance and death of her beloved daughter. She meticulously and lovingly reconstructs memories (both pleasant and painful) in service of a largely unsentimental tribute to her daughter. On top of this, however, is a scathing indictment of an over-burdened, underperforming police service and justice system, one that failed to solve the case or bring any form of relief or closure to the Thompson family.

The start of the harrowing emotional journey for Carol Thompson and her family would involve three successive phone calls. Carol would be told that her daughter’s car had been found in a dangerous area, and that her housemates were uncertain of her whereabouts. After Tracey’s body had been found by a farm worker, Carol was informed that there was little forensic evidence to lead the police in the right direction, and quickly saw that Tracey’s housemates were to be of little help in the subsequent investigation. To this day, no arrests have been made (even after her death was ruled to be a murder case involving strangulation), and the family have suffered further losses with other tragic deaths in their family.

During and after reading Carol Thompson’s memoir – written with the help of Roxanne Reid – I was quite predictably moved by Thompson’s unrelenting battle for justice, aggrieved by the seeming lack of both understanding and competent involvement by the police, and shocked by the lack of cooperation between the various arms of the law in our country. This said, I wasn’t entirely surprised that these elements would creep into the work.

What is, for lack of a better word, simply overwhelming at times, is the way in which Thompson and Reid construct far more than just an embittered tirade against police incompetence and a glowing tribute to a daughter whose life was cut short at such an early stage.  By refusing to paint Tracey as a flawless, romanticised victim of the hardships of life, the book attempts, nevertheless, to reveal a startlingly intimate, credible portrait of the roller coaster ride that is youth, with all of its uncertainties, banalities, triumphs and tortuous insecurities.

Although seen only through her mother’s eyes and recollections, Tracey presents to us as a living, breathing toddler, teenager, adolescent and young woman: a lover of animals, a caregiver, a free spirit, an excellent sportswoman, a tomboy, a tortured soul, a wounded spirit all at sea when faced with the prospect of being accepted and loved by others for who she is.

Whereas Tracey’s presence lingers over every page, Thompson is brave enough to reveal her own extensive range of feelings around and after Tracey’s death: anger, bitterness, confusion, emptiness, immense sadness – I could go on and on here and barely scratch the surface of a mother’s pain. We read also of her husband Buddy’s battle to express his emotions, their marital difficulties, and the distress of their son, Glen, grief she can only try to comprehend.

As hard-hitting and morose as much of this memoir is, it is also structured to read almost like a literary thriller, and my attention was held for the duration of the reading experience. The writing moves between different moments and time periods, thus keeping the reader in suspense as to the outcome of the investigation and certain key events in Tracey’s life. Moreover, the writing offers subtle shifts in register, feeling and mood, avoiding the potential tedium of a heartbreaking story where the gloom is never broken. We are subtly reminded of our inability – even as sons, daughters, brothers, sisters, fathers, mothers, friends – to fully comprehend the subjectivity and experiences of the ones we love most.

Positioned on the more emotive other side of the continuum of non-fiction crime-writing that includes powerful, vital works such as Antony Altbeker’s Fruit of a Poisoned Tree, Mandy Wiener’s Killing Kebble: An Underworld Exposed, and Hanlie Retief’s Byleveld: Dossier Van ‘n Baasspeurder, Thompson’s Betrayed – A Mother’s Battle for Justice ultimately demands to be read. It avoids forms of easy manipulation and rose-tinted glasses when looking at its subject matter, and continuously reminds us of the precariousness of life in a society beset by crime.