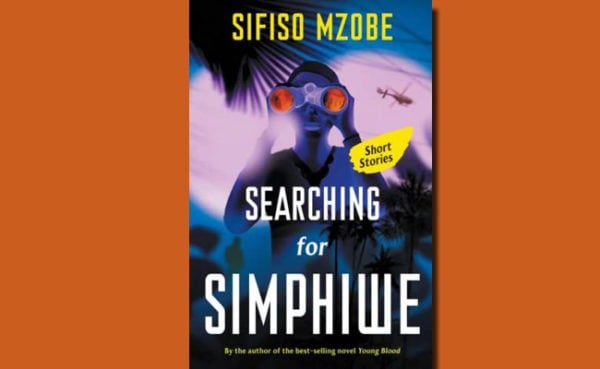 Anyone who has read Young blood, Sifiso Mzobe’s "high-octane 2010 debut", in the words of Elleke Boehmer*, will pick up Searching for Simphiwe with a great sense of anticipation – and relief: anticipation because Mzobe’s award-winning first book was remarkable and held enormous promise for the future of this young writer; relief because the long wait for the second book is finally over. And: Mzobe delivers on the promise.

Searching for Simphiwe is a collection of 11 partly interlinked short stories. Mzobe knows how to write place, and once again the setting of his stories – like his novel’s beforehand, the Umlazi township in KwaZulu-Natal – comes alive in vivid strokes. He also knows how to portray the people he is writing about in such a way that, even if you don’t particularly like them and/or the choices they make, you end up feeling for them anyway.

Detectives Zandile Cele and Gloria Ngcobo open the collection and feature in several of the stories. It is New Year’s Eve, and the end-of-month debit orders are coming in fast and furiously. It is time to make a plan for how to survive in January. Bribes are one of the options on offer, and the two detectives know exactly where to go to squeeze someone who owes them, but then another girl goes missing in the area and a different kind of uncertainty creeps into detective Cele’s dreams.

The mystery of the missing girls is picked up a few stories later and takes the reader into dark places. In "On a knife’s edge", detective Cele reconsiders the meaning work has in her life as she goes in search of a celebrity’s missing wife. In the final story of the collection, "Christmas sacrifice", she faces another serious decision.

In the titular story, Khulekani searches for his missing brother, who is a wunga addict, stealing even from his own mother to feed the lethal habit that is destroying his promising young life. Trying to locate Simphiwe, Khulekani gets into more and more trouble himself, and gradually, with the "resilience of our bleeding hearts", has to confront the tragic truth about his talented, but ruined, brother.

Drugs are also the topic of another fast-paced story, "Ecstasy". Lizwi, the narrator, thinks that he can start dealing drugs and get rich fast without having to pay a high price. But the man he gets involved with in the business has other plans for his "apprentice" in the trade. Another dangerous collaboration ensues in "Heist": "People say you always have a choice. Not in my case," says the narrator as he agrees to participate in a heist to feed his starving family.

Another family is divided over their traditional and religious beliefs as they navigate a crisis in "Faith". In "Never forgotten", the story of Aphiwe’s family is conveyed to a young woman while she is attending to her grandmother’s hair, "their ritual bonding time". The narrator tells us: "There is something sacred about hair." And so it feels to Aphiwe, "like she is rubbing these stories out of her grandmother’s hair". She discovers an old family secret that unsettles her sense of her own identity, but leads to a magical reunion that brought tears to this reader’s eyes.

One weeps for different reasons when the horrors of unemployment are laid bare in "The worst that could happen". In a nearly hopeless attempt to find a job, Siya encounters one disaster after another. In contrast, "The talented Mr Thusi" tells the story of dubious success when two school friends meet after many years and wander down memory lane, with misplaced arrogance and envy accompanying them all the way.

Short stories have a strange reputation. They say no one reads them and no one buys them. Those readers who haven’t discovered the form for its brilliance yet do not know what they are missing. Mzobe is a consummate storyteller, and it is easy to lose oneself in the tales he shares so compellingly. My hope is that we won’t have to wait another decade for his next book to hit our bookshelves and hearts.

Young Blood a fast read that grapples with the present