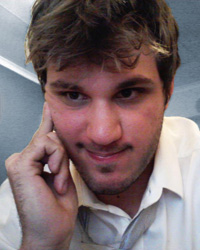 Hey, Adam! Congrats on being one of the Sanlam Sing ‘it finalists!

Thank you, I really appreciate it. It’s a dream come true for me.

How long have you been writing lyrics?

I’ve been writing lyrics since probably about 2006, but it was only in 2008 that I started really crafting lyrics that were workable in a musical sense, in an album project for my then one-man band, Two Lefts Right of Wrong, called “All These Lost Pictures”.

How do you feel about the fact that 3rd World Spectator recorded your song?

I’m absolutely stunned. I actually found out through a friend who SMSed me congratulating me, and I didn’t even know what for until she elaborated! Needless to say, what the guys did with it was brilliant – the song is fantastic. I entered last year, but didn’t manage to strike pay dirt, so this time around I didn’t go in with any expectations at all.

I really haven’t a clue. People tell me that I’m often too humble when it comes to answering a question like that, but I’m honestly not sure. If I had to guess, I’d guess that it’s because it’s not a song you’d associate with standard radio music. It’s got a very personal feel and the song structure’s not as rigid – there aren’t as many rhymes, the verses are short and virtually every line in the chorus has the potential to be a crowd-singing hook. In short, I think they picked it because it was a challenge; dealing with a song’s idiosyncrasies is never easy.

Interpretation is mostly an open-ended affair. What is the song about for you though?

The song was written with a view to being more of an alternative, punk rock track, because I was playing around with those vibes in my head at the time. This got me to thinking about what it’s like for the biggest rock acts in the country and the world to be up on a stage, and thus the song was born. “I can hear the penny drop to the beat when your heart stops” refers to the awesome silence that comes over a crowd right before something intense happens on stage, and the chorus is all about getting the crowd to sing it back to you; to live in the moment; to feel invincible with you.

I was sitting in my room, just toying around with ideas. Because I normally write around my piano, Sing ‘it gave me a rare opportunity to write the lyrics first, like I did with “All These Lost Pictures” five years ago, and not worry about the melodies and chord progressions. So I just wrote. I was coming off the back of writing some vocal demos for some friends of mine in Go Disaster! (one of which was another entry, “Lost at Sea”), so I was in that punky, alt rock zone, so it flowed pretty easily.

The hook, funnily enough, came to me because I’d had the Regina Spektor song “One More Time With Feeling” stuck in my head for a while, and the first line of the bridge was inspired by the title of the Fall Out Boy song “Don’t You Know Who I Think I Am?”, which, in turn, is from The Breakfast Club – one of my favourite movies of all time.