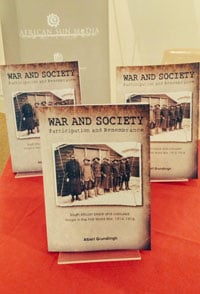 On 24 February Albert Grundlingh’s new book, War and Society, subtitled Participation and remembrance, was launched in Stellenbosch. His colleague and co-writer of Die oorlog kom huis toe, which netted them the kykNET-Rapport book prize for non-fiction in 2014, acted as facilitator/interviewer.

What was immediately clear from this conversation was that the style of the book is similar to that of the author’s previous works: keen observation, a humane touch and an unusual angle or approach to a well-known subject. Grundlingh has made a name for himself by focusing on social history, such as the interaction between particular communities, rather than describing the normal politically generated patterns of cause and effect. As a champion for the underdog, he has chosen here to illuminate the impact of war on black participants in the Great War, as the First Wold War (1914–1918) was known until the Second World War (1939–1945) was over.

According to the author it is significant that certain aspects of an event such as the Great War are typically “discovered” a full century after this event, partly because there are more sources are accessible, while new perspectives are possible. On the other hand, certain insights are forever lost, because no more eyewitnesses are available and times have changed – the current Zeitgeist is unlike that of 100 years ago. For one thing, the sense of citizenship and patriotism of that era was very different to ours: while our forebears may have believed it to be their holy duty to die for king and country, we have the benefit of hindsight; we have seen what politicians are capable of, that their bravado and conniving almost routinely cost millions of lives and immense suffering long after the last shot had been fired.

One of the most important questions a historian can ask is “Why?”. We can now ask why millions had to die in hellish circumstances, such as the 750 men during the Battle of Delville Wood (15 July – 3 September 1916), which was more of a massacre than a battle, and eventually a new understanding of war as sanctioned mass murder takes shape.

Why, then, do people go to war? Grundlingh analysed the reasons why black and “coloured” men joined up. Was it because there was a drought in the Northern Transvaal? Because people were poor? Or perhaps because black chiefs forced their underlings to join? Patriotism then? Or did they hope their participation would mean their circumstances would get better after the war? Grundlingh found that except for a few criminals who joined to stay out of prison, most joined because they hoped that by being prepared to spill their blood for their country, they would attain full citizenship. According to him, some of the black elite in South Africa argued that they should suspend their protest campaign against discrimination and support the war effort in the hope that such a policy would be rewarded. This approach was encouraged by the government.

Nevertheless, black soldiers from South Africa were the only ones who were prohibited from fraternising with the local (white) population and were even contained in kampongs. What made this even worse was the fact that blacks in South Africa were not conscripted, in contrast with what occurred in other colonial or ex-colonial countries in Africa. So why did 22 000 blacks volunteer to be sent to environments that must have been totally alien to them? And was it worth it? What were the 616 troops who drowned thinking about when the SS Mendi sank? Did they realise that the great adventure they had imagined was ending differently from what they had anticipated? We will never know – the initial hero worship and hyperbolic renditions of this tragic incident have long since ended, even though there now is an Order of Mendi, which replaced the Wolraad Woltemade medal for valour. The Great War was never commemorated with much enthusiasm in South Africa.

The division between white and black back then also promoted further distrust between the races. “In parliament, National Party members were unanimous that [the] country’s participation in the war would weaken the dominant position of whites and present black people with an ideal opportunity of forcefully challenging the status quo” (7). No doubt the experience of the South African War (Anglo-Boer War) of 1899–1902, in other words, only 12 years earlier, when many black and coloured men joined ranks with the British, was the main reason for this concern. What was then, still is – even the Border Wars of the Eastern Cape, the Bloukrans massacre, Blood River ... these bloody clashes frequently surface in the collective consciousness of whites. Taking that into account, the participation of blacks in any war would probably make no difference at all; not then, not now, to a significant portion of white South Africans. The reaction to farm murders today reflects this “swart gevaar” syndrome. By the same token, however, the scale and the degree of brutality associated with these murders seem to be a legitimate cause for concern.

In sharp contrast to the attitudes of many white South Africans, it was a revelation to Grundlingh that the main reason for participation in the war by third-class citizens was to feel better about themselves – to attain or regain a sense of self-worth. For that they were willing to gamble their lives.

So what does Grundlingh’s interpretation of this almost forgotten “sliver of history”, as he calls it, contribute to our understanding of the past? Will his book make a difference? Maybe not immediately, for historical writings are parts of a puzzle and it takes more than a few pieces to get a full picture. Grundlingh states: “Although critics may argue that the period of the first World War is a ‘Eurocentric time capsule, artificially introduced into the African context’, it is hoped that this study has demonstrated that in many different and sometimes unexpected ways the war was very much a reality” (169).

War and remembrance entails 197 pages of a well-written – and on the face of it, based on the source list – thoroughly researched account of “black participation” in the Great War, which was not great in any positive way, and certainly not so for the black and coloured troops, during or after the event. Sun Press managed to put together an attractive and informative product with photographs which have probably not been seen by many other than family members of ex-soldiers and archivists, as well as a useful index and a list of abbreviations.