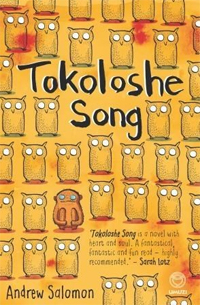 Andrew Salomon, a Capetonian, was shortlisted for the Terry Pratchett First Novel Award for the best unpublished science fiction novel in the Commonwealth of Nations in 2011. Salomon’s work was titled Lun. Although the award mentions science fiction as its focus, some of the novels that have been shortlisted and have received the award would more correctly be described as fantasy or horror; these genres do “leak into” each other.

Tokoloshe Song, Salomon’s first published novel, is a fantasy laced with horror and humour. Lun reappears but does not speak, for tokoloshes cannot speak. (A deft touch, as the tokoloshe characters retain their mysteriousness.) They do, though, understand human speech and, importantly for our tale, they are calmed and soothed by human song.

The tale opens, on a dark and stormy night, in Cape Town’s docks. Richard Nevis is working at his chosen alternative career: restoring antique boats. He has given up his lucrative living as a lawyer because he despised his former employer’s finagling. Richard’s industry is interrupted by an emergency call: he is a volunteer in a tokoloshe shelter and one has been brought in. The terrified, angry tokoloshe – who, we will learn, is Lun – attacks and injures Richard, but is calmed by his singing.
The narrative then shifts to follow, on the same night, two women who belong to an order (unnamed) and wear long black cloaks. Sindiwe and Emily’s vocation is to deliver babies among the poor of Cape Town, but they also punish those who harm children they have delivered. The locals dub them Pitbull Midwives. After a delivery that brings joy to a humble home in Harrington Street, they move on to overpower a culprit in his room (they’re physically strong), paralyse him temporarily (he can’t move, but can feel pain), and brand him “THIEF” on his forehead. He had stolen the life of a child.

There is more violence to come, and Salomon sustains suspense as the story moves swiftly from one short chapter to another, one group of characters to another. Two villains and their sidekicks wish to force Richard as well as any tokoloshes they capture to help them find an ancient metal box and open it. Mamron, the sole monster in the book, employs as helpers two beautiful but murderous twins. They don’t speak because they have had their tongues cut out. Mamron tortures tokoloshes and Richard. Kras, the other villain, contrives to poison the head of UCT’s African Studies. There is also a hitman: his next target is Richard.

But there is much humour too, of the noirish kind: the hitman styles himself Doorman because he lurks in doorways as he follows his hits. Kras has a pet arthropod, a large crab-like creature, named Arthur. Richard’s attempts to find a romantic partner through a dating service also lead to comedy – also of a bizarre kind.

The several strands of the tale come together in a journey, a quest, from Cape Town to Nieu Bethesda. Lun, having escaped, is fleeing there, followed by Richard and Emily, his would-be protectors (who are clearly meant for each other), followed by both villains’ employees, followed by … Doorman – who has begun to switch sides, for an unexpected but well motivated reason. The thrilling denouements (there are two) feature a hungry shark.

As Salomon uses the South African environment, urban and rural, it has a direct effect on characters and events. When the midwives brand the child murderer the incident comes as a shock, but is also satisfyingly cathartic, given the high level of child abuse in the country. Nieu Bethesda, with its isolation and the air of weirdness imparted by Helen Martins’s Owl House, is an appropriate site for Lun’s birth and for him to seek shelter. The moral dilemma confronted by Richard – if he protects tokoloshes from harm he will risk his own life – resonates in South Africa, where the decision as to what to do when we confront the Other has resonated and continues to do so. Tokoloshes, the tale tells us, have survived in small numbers in caves, and so, too, did the San people in the past, who were also outcasts and were hunted like vermin; so, too, in the present, baboons and other despised animal species are forced to evade human depredations. There is a scene in which Lun is reduced to tears when his efforts to get along with humans are once more defeated by their fear and hatred.

This book is original and enjoyable. Salomon is a skilful, vigorous storyteller whose rich imagination has been harnessed to create an internally consistent world shot through with enchanting fantasy. Cleverly, he has the object of pursuit throughout the story, the object in the box, finally thrown into the sea. The object, therefore, like the mute tokoloshe characters, retains it mythic status, despite the self-referential joke of having a UCT lecturer assert that tokoloshes do exist. The lecture’s title: “The Tokoloshe as the Other: Engaging and Disengaging Postmodern Values”. This is a witty, fun read that is also emotionally satisfying.

Fantasy art is becoming increasingly popular in South Africa, as can be seen in the thriving Comics Fest section of Cape Town’s annual Open Book Festival, while fantasy films – such as those featuring Tolkien’s hobbits, JK Rowling’s Harry Potter series and CS Lewis’s The Chronicles of Narnia – draw enthusiastic audiences of all ages. However, fantasy literature remains the genre's primary medium, and yet it is still, in a country steeped in biography and other non-fictional prose forms, a fairly unusual genre for South African writers to adopt. Prominent among those who do, are Lauren Beukes, whose Zoo City was shortlisted for World Fantasy Award for Best Novel in 2011 and then went on to win the Arthur C Clarke Award in the same year, Greg Hamerton, Henrietta Rose-Innes, and Sarah Lotz. Andrew Salomon now occupies a position among them.