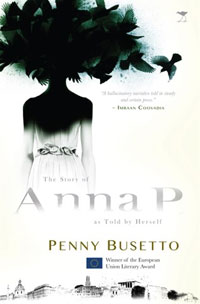 Buy The Story of Anna P as Told by Herself from Kalahari.com

For me as a voracious reader and lover of books, it is always a comfort to know that different works of literature have different functions, different ways of communicating with readers. Some – and this is often the case with works of genre fiction such as romance, adventure or crime novels – take the reader on a journey, yet most often leave us with a sense of closure and comfort, solace often not found in the real world. Other works – of a more experimental or unusual bent – are less interested in offering feel-good moments and focus more on presenting surreal, strange, dark or discomforting visions of humanity. One such work, heavily reminiscent in mood and tone of the Camus masterpiece The Stranger, is Penny Busetto’s debut novel, awash with intense lyricism, painful instances of eroticism, a firm sense of space and place and the threat of psychic or physical violence.

The novel, divided into three sections, told to the reader by voices alternatively taking the form of “I”, “she” and “you”, hinges on the simplest, yet most urgent, of premises: Anna P, without any concrete memory of why she is in Italy when originally from South Africa, is a primary school teacher on an island, fearing the day when a real teacher will come to take her place. Bathed by the incandescent light of solitude, her only occasional company is that of a female prostitute with whom she sometimes spends the night, before a young boy, Ugo, comes to find himself in her care. Amid her spare, limited, troubled existence – described by Busetto in gorgeous, unsettling, achingly stripped-down prose – is the question of her involvement in a murder on the island.

In the novel’s long first section she must report to the Italian police to endure difficult interrogations, while the subsequent two sections offer truncated and fractious meanderings in therapy and outside of her present days and daze, her deeply traumatic past and mental health, and a glimpse into the courage that defines her future. Busetto makes few concessions to the reader in terms of concrete characterisation, and her female protagonist is haunted by the novel’s central existential dilemmas: What happens to our identity if we have no memory? How do we find our place in the world if our vision of ourselves is never fully consonant with the self-narratives we would like to believe? How are we to relate to others in an ethical and constructive manner if our own understanding of right and wrong is placed under erasure? Ultimately, how do we overcome being strangers to ourselves if we have never truly loved or felt loved?

This strange and difficult novel carries us along on a tidal wave of carefully edited, finely wrought moments of sensual and moral awakening. The Story of Anna P as Told by Herself refuses closure resolutely, but its fierce grip is extremely hard to shake.