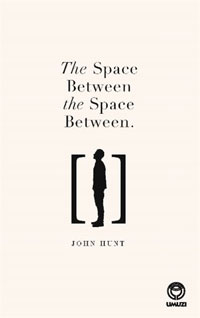 In his debut novel, John Hunt calls his protagonist Jethro, which is the sort of thing that one feels compelled to look up. Hence:

Jethro masc. proper name, biblical father-in-law of Moses, from Hebrew Yithro, collateral form of Yether, literally "abundance", from base y-t-r "to be left over, to remain".

Which I notice, because it is convenient for me to do so, and also because the novel is one deeply concerned with residue; the protagonist of The Space Between the Space Between carries around with him leftovers of the significant things that have happened to him – the hat and shoe that are all that remain of a killed lover, a painting by an 11-year-old friend, and a desiccated moleskin whose missing pages, we are told in a recursive gesture, constitute much of the novel’s text.

John Hunt’s novel’s cover art and typography play with the idea of the empty bracket set to depict the titular space between the space between – whose right angles seem wrong, somehow, given how much the novel wants to go in ever tightening spirals.

The first chapter takes the form of a digressive conversation between psychologist, Dr Chatwin, and the patient, Jethro; the second chapter takes over in the same mode, lulling the reader into the faintly resigned belief that this novel is to be one of those Beckettian dialogue pieces but longer, then veers sharply by having the first half of the chapter stand revealed as a fiction, written by Jethro, to be read by Chatwin. This happens a few times. Since there isn’t any obvious distinction between Jethro’s voice and the narrator’s, and since these metatextual sequences aren’t flagged by anything other than centre-spaced

the reader is henceforth constantly testing the narrative ground to see if they haven’t unwittingly been pulled into a story-within-the-story. Probably that isn’t a terrible thing; much of Hunt’s prose is worth going over slowly.

This isn’t entirely surprising; John Hunt is an award-winning playwright, which explains the novel’s carefully tuned dialogue (generally in the key of C and running E B C#m A) and tendency to read like long stretches of conversation interrupted by careful stage directions. More to the point, Hunt is also an award-winning advertiser, which explains the novel’s surfeit of pithy lines, impressive images and overwhelming sense that the reader is being sold something.

This isn’t entirely surprising, either; most novels are trying to sneak in some ideology or another, whether they know it or not. What bothers me about this book is that I’m not quite clear on which one it’s trying to sell. A new South Africa, possibly? Given Hunt’s involvement in Nelson Mandela’s first election campaign, and given the background radiation of violence and disgust that occasionally impose themselves on Jethro’s eloquent if extensive self-analyses, which take him out of the waiting room and out into the wider world of Johannesburg, this seems possible; quite possibly Hunt is offering some thoughts on how to live, or how to live bearably, in a society in which one is always imbricated in a system of graft, of violence, of disease, of idiocy, and of ugliness.

Possibly. Although given that Hunt has created in Jethro a figure of an almost insufferably maladaptive behaviour (choosing to read “Honk If You Love Jesus!” bumper stickers literally, standing at a T-section with casual labourers and holding a sign that reads “Poet”, trying to walk from Johannesburg to Cape Town with two shopping carts and a giraffe outfit), possibly the question is less one of how Jethro ought to live, and more of how Jethro is alive at all.

The answer to that is either Jethro’s whiteness, which is what allows him to traverse the various spaces he does relatively unmolested, or his numbness, which allows him to survive what molestations do occur, or else community; Hunt constructs an entertaining ensemble that conspire in various ways to keep the traumatised Jethro alive and tolerably well, none more so than Sam, Jethro’s neighbour, the Sancho Panza to our protagonist’s Quixote. Sam is the earthier, unreflective foil to Jethro’s monologues, engaged in the work and play and small-time hustle that life requires while Jethro contemplates various modes of more and less whimsical suicide. Why Sam does this is opaque, to me; perhaps Sam has simply found the correct “frame” (an image so often returned to it ends up feeling a tic) by which to regard the world and living in it as worthwhile endeavours, and is waiting for Sam and the reader to catch up.

If this is Hunt’s project, he doesn’t do it naively, however much he may couch Jethro’s arguments in philosophies drawn from dime-store yoga manuals and Wikipedia entries on Heisenberg's uncertainty principle; at one point he allows Dr Chatwin room to respond to Jethro’s various formulations for How The World Is:

“Searching, no matter how creatively, for a system that makes the world less arbitrary won’t make it so.

“Jethro, life isn’t a book. Chapters cannot be planned and then retrofitted into real life.”

Jethro’s response to this comes some pages later, and is uncommonly succinct:

I have just received and read your note.

It’s a funny novel. Funny ha-ha, as in the above, and also funny in that it’s composed of a series of vignettes which interrogate causality, and responsibility, and time, whose own causal and chronological relationships are sometimes unclear – and not necessarily usefully unclear. Part of that I attribute to the fuzzy rhetoric that Jethro employs in the above rebuttal to Chatwin; another part to the narrator’s strained relationship with time.

Much is made in this novel of the present – of a sense of transcendental awareness of the present, of which artistic creation is one mode. Pen to paper, brush to palette, water to singed-brown squares of grass are recognised, advanced, as acts which can be made numinous, which can free the agent briefly from “the prison of history and the promise of the future”. That’s what the recursive title refers to – the space between the space between is the present. I apologise if that counts as a spoiler.

On the one hand this emphasis of presence counts for the novel’s not unremarkable sense of immediacy; I read the thing in two sittings, and not unhappily. On the other hand, this emphasis can make the novel feel ahistorical, and irresponsible, difficult to be around; towards the end of the novel, Jethro observes that Sam has been visiting him less and less, returning his focus to his own life, a little relieved. By the last few pages, some readers may find themselves feeling the same.