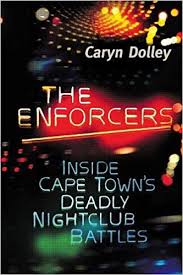 The enforcers – Inside Cape Town’s deadly nightclub battles is a necessary reflection of the drama that is policing in the Western Cape. In it, crime reporter Caryn Dolley assembles, often first-hand, perspectives on many of the major players and themes around the honeypot of nightclub and restaurant security in the Mother City.

It is a brave undertaking, especially for a relatively young journo who started her career in 2006 and covered the topic at hand six years after that. Bad people don’t like to see their names in print too much, especially when a book like this does the equivalent of pinning their mugshot to a wall with strings of red wool connecting them to others and potentially incriminating information. Pagad’s reign of terror in the 1990s cost the careers of several Cape Town journalists and photographers. And, back then, the media and support structures were arguably in better shape than today.

Make no mistake: there is a psychological burden to doing this work. And, taking the paltry returns of book writing in South Africa into consideration, one wonders why someone would do it at all. In fact, that personal element is perhaps an unfortunate omission in the book. Dolley’s is the latest compilation on current affairs, a field similarly contributed to by especially Media24 journalists of late.

Now to the work itself.

The book begins with what Dolley calls the "Apartheid bouncer blueprint" and is a brief revisiting of Ferdi Barnard, he of the former regime’s notorious hit squads, and Vito Palazzolo, who was the centre of international criminal investigations for years while in South Africa. Then, it turns to a more contemporary local cast, incorporating both police and policed, and a dizzying web of events. There are many familiar names – among them Veary, Lifman, Beeka, Staggie, Modack, Krejčíř – references to the notorious numbers prison gangs, and well-known venues like the One&Only, Mavericks, Café Caprice and Grand Africa Café and Beach.

The text is illustrated with photographs taken from interviews, outside courtrooms, at clandestine meetings and during a police raid.

Two pertinent statements from the author on either side of the guts of the book broadly sum up the situation as the author sees it. Within the first pages, she writes:

Combine all these characters who repeatedly crop up in and around Cape Town’s clubbing arena for various reasons – gangsters (suspected or otherwise), underworld figures and cops – and season with the inevitable pinch of politics, and you’ve got a war. It’s a war with very high stakes, no parameters, and invisible crosshairs in which anyone can get caught.

Then, wrapping up in the final chapter: "Corrupt hands shaping the underworld purposefully keep it amorphous and ambiguous so that it can’t be pinned down and so that the truth diffuses."

If it’s a story arc rather than a simple dateline you’re expecting, the reader will need to look hard. But, if it’s a focused compilation of the general situation you’re after, then The enforcers is right on the money. Either way, for a citizen of the city, the book makes for hard reading. We are offered little to no glimpse of resolution to the "murk ... [and] polished surfaces reflecting each other".

Dolley shows us the mess that things are in, seemingly due to a blend of pre-1994 politics, stubborn transitionary issues in formal government structures and corruption that swelled in the Jacob Zuma era.

There are certainly overlaps with books like Johann van Loggerenberg’s Tobacco wars and Jacques Pauw’s The president’s keepers, but it’s not as personal, not as clear. While The enforcers makes for interesting reading, it doesn’t quite reach their storytelling calibre. There is an art in finding and lifting the real story from the day-to-day facts. Dolley may not quite be there yet, but she’s certainly on her way.