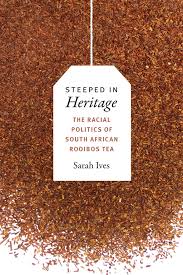 Sarah Ives’s Steeped in heritage: The racial politics of South African rooibos tea removed the stability I once drew from a cup of tea. The book explores how acts of farming in South Africa’s “rooibos region” are entangled with racial, political and environmental issues of land and belonging. Ives expands upon previous studies of global commodities, such as Sidney Mintz’s Sweetness and power, by precariously placing the book in both the Cederberg of post-apartheid South Africa and the global markets of late capitalism, or the markets to which small-scale farms are indelibly linked. Racial inequalities are afforded fresh insight, and with the current resurgence of movements like #BlackLivesMatter, books such as Ives’s seem to call louder each day. What better way to delve into South Africa’s socio-political underbelly than with a cup of tea?

Ives’s book might technically be labelled anthropology, as it grew out of her PhD dissertation at Stanford University, yet familiarity with anthropology, or the social sciences in general, is not required for entry. With chapter introductions that include phrases like “This chapter will …” and conclusions in similar styles, Ives has gone far to improve each chapter’s readability. The result is not just an effortless read, but a freer mind to probe the topics at hand.

We are introduced to what Ives names the “Rooibos Revolution” early on. Rooibos is no longer a product known solely to South Africans, but rather a commodity whose popularity is on a global rise. Ives attributes this rise to new global interests in the tea’s health benefits, but those farmers and farmworkers who cultivate the crop seem to have always already been aware of these benefits. Indeed, the very cultures of those who dwell in the region seem built around the benefits. Their cultures were built around the product before it was known worldwide and, as such, stake claim to a deeper connection.

Ives probes these connections. Like a true anthropologist, she uses the words of her participants so that they are the ones fighting to link themselves to the commodity. Given that the product is both quintessentially South African in domestic and international eyes, such placement takes the form of a commodity specifically positioned to late capitalism and post-apartheid South Africa. The farmers’ and the workers’ stakes are not just in the land in question, but in how the land is perceived by the international community. Here grows a poignant take on South Africa’s land issues.

Racial politics, though central to land issues in areas like the rooibos region, are shown by Ives to be entangled with economic, ecological and political issues. Ives suggests that at the surface of these entanglements are people’s stakes in indigeneity. Ives draws on the identities of the region’s Afrikaners and coloured people – people who, she believes, do not neatly fit the category of being indigenous to the region – to explore senses of belonging. These precarious people construct their own indigeneity, blurring the line between how rooibos ecosystems determine their lives and their own place in determining such ecosystems.

The precarious construction of indigeneity creates fears of those outside the region’s defined borders. Aliens take the form of both migrant labourers and plants that are non-indigenous to the region. It is through this engagement that the book begins to steep itself in anthropological theory, most notably that of Mary Douglas. Yet, Ives’s use of Douglas’s matter “out of place” is more suitable for someone seeking to understand Douglas than someone needing Douglas to understand Ives.

With the fear of the outsider comes the fear that the outsiders have for those on the inside. Rumours and the politics of narration intertwine people seeking a stake in the region. These “outsiders” begin constructing their own narratives of belonging. Like the farmers currently on the land, their narratives express a sense of belonging both to the region and to rooibos tea. Ives takes no interest in the truth of these claims, but rather focuses on what effects these claims have. With rooibos entering the global market at an ever-increasing rate, claims to the product grow. Growing alongside them is the power of the land. And both those living on the land and those wanting to live on the land are raising their stakes.

The farmers and farmworkers create purity in their own product to make one believe that outsider influence would corrupt the product. They believe they are growing the true rooibos, and, because they seem to have been doing so for years, it follows that they should continue. Ives has comfortably established the precariousness of these claims, so she instead focuses on the global implications of purity. She asks about rooibos’s indifference to both the workers and the global market demanding it, highlighting the strained relationship the product really has. Despite efforts to promote the sustainable growth of the product, the complications of people staking their own identities on the product cannot allow it to function as a pure plant in nature.

Here comes late capitalism’s great probing. Can a commodity like rooibos be pure and healthy, as it is portrayed, when such political, economic, racial and ecological issues lie beneath its surface? And not just lie below the surface, but continue to grow unaddressed? Or, in Ives’s words: “While life on a rooibos farm may have been measured by the cycles of the seasons, the future looked to be more than just the eternal repetition of the same.” And I guess that it is from here that the book really became exciting for me. Are we going to continue to delve into regions of socio-political instability, with tea, and view them from afar as an unchanging cycle? Is the reality we have constructed the only reality, and one that nihilistically cannot be escaped from? Or can one step forward from books such as Ives’s and take action? Though Ives offers few solutions, she has done the work of uncovering, and surely now, with COVID-19 keeping one homebound, thoughts can be mustered to address the red-brewing issues Ives discusses? Books like Ives’s do not act, yet they draw attention to action required, so perhaps the best gauge of whether Ives’s book is worth reading is not so much what it says, but what it calls attention to.