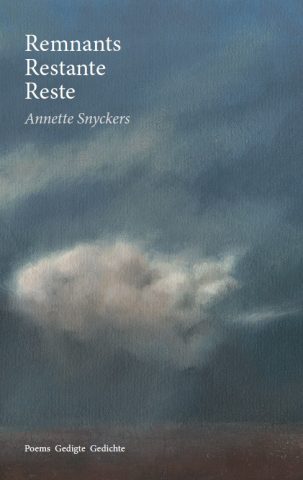 It isn’t often that you can delight in a poetry collection in three languages, but Annette Snyckers’s debut Remnants restante reste invites you to do precisely that. Writing in English, Afrikaans and German, Snyckers explores the possibilities of translation and creative expansion. Not all the poems included are presented in all three languages, but the ones that are add a magical layer to the poetry as the individual manifestations enhance and augment one another. The author notes: “Where a poem appears in more than one language, the first version is not necessarily the original version. Poems were written in different languages as I felt the need to write them, and all subsequent translations were done by me.” I feel fortunate to be able to enjoy all three versions in meaningful ways, but even if one of them eludes you, the remaining offerings in the collection are rich enough to suffice for a satisfying read.

Every word in any language contains stories that often go beyond its surface meaning. In that way, we all speak in tongues. Remnants restante reste opens with the permutations of the poem “Tong”, or “Tongue” and “Zunge”: “Ek vou my tong/ om my taal, versigtig –”, or “I fold my tongue/ around my language, carefully –” and “Ich falte meine Zunge/ um meine Sprache, vorsichtig –”. The link between “tongue” and “language”, and their interchangeability in some languages, echoes through the lines, but cannot be articulated in every one of them. (In contrast, as a speaker of Polish, I find it fascinating that our word for “tongue” is the same as “language” – język – and that there is no alternative for either.)

The opening lines of these first three poems speak to the last two words of each: “my plek”, or “my place” and “meine Heimat”, pointing exactly to the subtleties of every expression, as “Heimat” is so much more – with deeper, stronger connotations – than just a “plek” or a “place”; but a “plek” and a “place” are so much wider in their applications. And so the word games continue through the volume and give much food for thought about the nature of language and the ability to communicate exactly what we want, or hope, to. In Language lesson, we are told that
it was essential to understand her:/ because above all – / I loved her son.

“Doodloop” ends on a sombre note:

Remnants restante reste includes other poems about living between and in different worlds that are not necessarily about language. Snyckers returns to the theme of family, and especially the daughter-father relationship. “How I would have flown”, the narrative I in “The final no” tells us, “But I’m towing? my father’s line.” The mother in “Firstborn” captures the wonder of “birthing”:

transformed, intoxicated,
all through the night I soared
above that dark expanse of water.

The second half of the book turns darker; the poems speak about loss and fear, and exude a heaviness that is not detectable earlier:

on that terrible day
when I lay down in its lap
and tried to untangle tomorrows
from yesterdays. I lifted my eyes
to the mountain and wondered
where my help would come from (“The striped sofa”).

In “The visitor”, we are made to realise that

while you hope and pray
that he might leave
just as suddenly as he came.

But trouble seldom does –
he’s come prepared
his bag is in the car.

He likes to stay a while.

Some of the most moving poems in the book refer to the author’s other field of creative expression: visual arts. The child in the poems perceives beauty in ways the adults around her are incapable of. She remembers seeing a piece of artwork on her aunt’s kitchen wall:

I was seven,
crazy for that moth
and the unknown artist
I secretly adored (“The moth that launched a career”).

Or she recalls seeing days as colours at around the same time: “Monday was not really blue,/ but rather rosy” (“Synaesthesia”). With words, as with brushstrokes or through a camera lens, Snyckers shares affecting everyday observations, like, “Eyes can lie,/ but hands reveal” (“Firsthand”) and

I like early morning sunlight,
the way it elbows through the trees
getting the birds all excited” (“Sun moves”).

She ends the collection with a journey that is accompanied by “the smell of turpentine”, and alludes to the great power of the artist:

the canvas
where my brush
may conjure clouds,
make rain (“The lay of the land”).

Remnants restante reste does similar wonders with words, and will make you feel the solace of rain and the moods of a cloudy sky. It will make you think about language, its magic and its limitations.