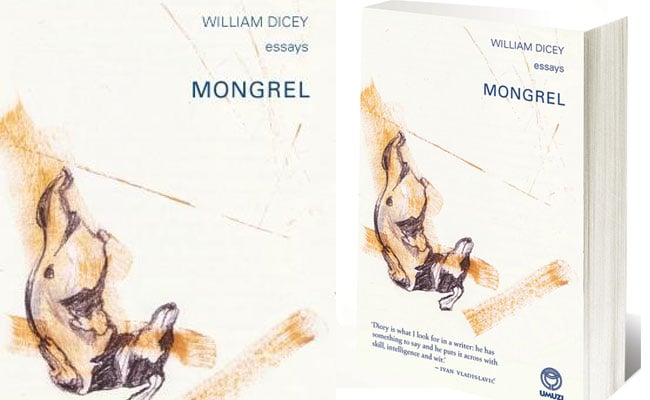 There is nothing quite as satisfying as an excellent personal essay, and William Dicey’s Mongrel contains six gems of the genre. Dicey has been on my literary radar for a while now. In the past decade, whenever I found myself admiring a beautifully designed local book, Dicey’s name would often feature on the copyright page. His first book, Borderline (2004), a travel memoir about canoeing on the Orange River, is one of those titles readers remember fondly whenever mentioned, but apparently, it is out of print. Fortunately, I found a copy in our library. I have been meaning to read it for years, and Mongrel has finally made me realise that I need to succumb to the longing.

The essay collection opens with four epigraphs which already warn us that what lies ahead will not be as clear-cut as one might assume.

Allow me to quote a few snippets:

- “Fiction, nonfiction – the two are bleeding into each other all the time …” (Geoff Dyer).

- “[T]he strays of literature have tended towards the ill-defined plot of the essay” (Hugh Walker).

The tone of the essays ranges from intimate through personal, playful, or analytical, to simply bizarre. The latter becomes immediately obvious when you consider the title of the first piece in the collection, “Miss Meat Festival”, and its first sentence: “Hannes Rheeder, I love you like a fish parcel.”

Dicey and his friend Justin are travelling north to the Hantam Meat Festival in Calvinia, an “annual celebration of mutton and lamb”. On the way, they stop at a padstal where they encounter a group of fascinating characters, among them the shopkeeper Hein, the diamond diver Manie, and Hannes Rheeder of the first sentence, the organiser of a vintage-tractor rally who reminds Dicey of Radovan Karadžić (it is pleasing to note that as the typesetter of the book, Dicey got all those Slavic diacritical marks right, as he does with other names throughout the book). The objects on sale, such as “a pack of violin strings”, are as intriguing as these tractor enthusiasts and their friends.

In Calvinia, the surreal atmosphere and encounters continue. Justin, “a kinetic sculptor” who “will talk Rodin and Trotsky if you let him, but he’d be just as happy getting drunk with a bergie and bedding down in a ditch” is not only the “ideal travelling companion”, but the best commentator: “His mode of seeing is deconstructionist. Where I see a tub full of lamb offcuts awaiting the mincing machine, Justin sees the nexus of carnivorousness.”

Dicey’s remarks are similarly on target. Watching a sausage maker, he observes: “Even as I admire this slick operation, it occurs to me that there’s something recursive – not to say horrific – about killing an animal, chopping it to pieces, mincing it, and then stuffing it back into its own intestines.” (This is not an essay defending animal rights, I need to point out, but eating wors will never be the same after this description.)

The meat festival is in its 24th year when they attend. It is a peculiar amalgamation of cultural activities which include a strong-man competition, Ram’s Head Abattoir Carcass Competition, and the crowning of Miss Meat Festival. The attached photograph of the three winners posing next to sheep carcasses pretty much sums up the events. But Dicey is careful to point out that as outsiders they “need to recalibrate for the platteland, ease the settings on our urban firewalls”. He records his and Justin’s experiences, but does not judge: “It’s about local farmers leaving their wide-open and often lonely spaces to congregate for a weekend, share traditions, eat and drink together, socialise, party, pray.” Or in Justin’s words: “It’s like those antique tractors in the desert. A suicide mission in terms of functionality, but a sheer fucking triumph in terms of poetry.”

In the next piece in the book, “A Story in Which Everyone Looks Bad”, Dicey follows a Sea Point murder case in which a man is shot in his own home in what seems to be a robbery gone bad, involving the man’s gay lover and a Cape Flats gangster. Both are charged. The trial begins only two years later, in 2010. It takes another three years for the sentence to be passed. Two years into the case, Dicey is invited by the victim’s nephew, a friend of his, to sit in on the proceedings. What he witnesses are a series of shocking failures of the justice system and of human empathy. He is told by his friend: “Everyone involved lacks either talent or motivation … and most lack both. There’s no lucidity of thought, no intellectual rigour, no desire to walk the extra mile. Come to think of it, there’s probably nothing for you to write about but stupidity and laziness.”

But then Oscar Pistorius kills Reeva Steenkamp and the comparison between the handling of the two cases truly exposes the tragedy of the typical South African murder story: “a tawdry crime, a perfunctory investigation, a shambolic trial”. The real, everyday story “no one wants told”, however, is the one that desperately needs to be heard and the terrifying societal failures involved have to be addressed, urgently.

“South African Pastoral”, Dicey’s take on another typical South African story, the plaas story, is just as heartbreaking. Dicey owns a pear farm with his brother. It is called Buchuland, a place where their “roots run deep”. He speaks of it as “my” farm: “It’s a small word, but it works hard.” Centuries of colonialisation and decades of apartheid have turned any local farm into a socio-political minefield. Dicey has no illusions about his relationship with the “small, wizened people with whom I’m caught up in a strange patriarchal dance”. He is not afraid of laying his heart bare. Always aware of his position of privilege, he tries to find the right kind of balance between paternalism and independence in his relationship with the people he employs and who, like him, think of Buchuland as theirs. His analysis of the recent farm worker strikes, the predatory nature of companies and loan sharks preying on them and the workers’ active participation in their own exploitation, as well as the question of race involved in all of these considerations are eye-opening.

Dicey also refers to the heartening results in tackling these issues achieved by Mark Solms and the people on the famous wine farm Solms Delta in the Franschhoek Valley. He understands that it is a matter of doing “the right thing, the obvious thing”. Infected with “Solmsian enthusiasm”, Dicey tries to introduce similar changes on Buchuland, and to deal with the responsibilities he inherited with the land along with a feeling of shame.

A good personal essay will make you think, recalibrate your views, occasionally spur you on to action. Dicey’s essays manage to do all this and more. What transpires throughout the entire collection is that apart from being a lapsed mathematician, dedicated farmer, passionate traveller, environmentalist, and fundamentally a writer, Dicey is – not surprisingly, given all else – also a fervid reader. “No Ship Exists” tells the story of his trip to India which was inspired by Derrick Jensen’s Endgame: “It rearranged me more than any book I’ve ever read,” he admits. He takes us on a trip through India and through the part of his library which has shaped his environmental consciousness. The two landscapes become intertwined. Although one of them is the product of civilisation – the natural environment’s greatest enemy – they cannot but co-exist. It is the terms of this coexistence which need to be renegotiated in order for all of us to have a future: “One of the difficulties in thinking about environmental collapse is the sheer scale of the problem. The entire planet is at stake and all you have at your disposal is a fleeting human life. It’s extremely difficult to acknowledge the seriousness of the problem without freaking out about it.”

The last two essays in Mongrel are of a more literary nature. I can just imagine what fun Dicey must have had in the typographical challenges he set himself writing and designing a text like “What Goes on Inside Is Just Too Fast”. “I embarked on an essay in a spirit of exuberance, with no particular objective in mind,” he says. It consists mainly of footnotes, of which some have their own sub-footnotes or side notes – it is text design acrobatics at its finest, or a case of “foot-and-note disease”, as the author calls it. The essay centres on three random books of interest to Dicey: JG Ballard’s War Fever, Charles Willeford’s Cockfighter, and Nicholson Baker’s The Mezzanine. Perhaps some will find the text too much of an indulgence, but any reader or writer who has ever felt the magnetism of the footnote will gladly wallow in Dicey’s exuberance.

Reading the last essay in Mongrel, I was gradually overcome by a feeling of being sent on yet another wild-goose chase, but this time not through the labyrinths of endless footnotes, but through a writer’s ebullient imagination. I won’t spoil the delightful premise of “D’Arcy and I” by disclosing much about it. Let me just say that it made me marvel and chuckle and think about the beauty of Melville’s “ragged edges” and Dicey’s “mongrel forms”.

The essays in Mongrel reminded me of one of my all-time favourite essayists, the American Anne Fadiman, and locally, of Ivan Vladislavić, who gave the book the following shout: “Dicey is what I look for in a writer: he has something to say and he puts it across with skill, intelligence and wit.” I couldn’t agree more. I have nearly finished with Borderline now, and can only hope that he is “getting on with his own work” and we won’t have to wait another dozen years for the next Dicey title.