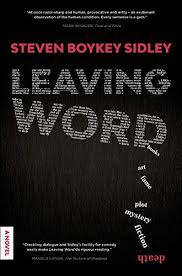 As Steven Boykey Sidley says in the acknowledgments of his latest novel, Leaving word, it is true that “writing a book with a fiction editor as its main protagonist is asking for trouble, on many levels”. Writing a book about the publishing industry as a whole might be asking for even more trouble. But, if anyone can pull it off with aplomb, it is Sidley. And Leaving word, his fifth novel, is a rollicking read because of it. I wish I could call it a metanovel, but that would make it sound too theoretical and perhaps scare readers who are just looking for a good read. The meta elements are undeniable, but their delightful tongue-in-cheekness obfuscates nothing; it just adds to the fun of reading.

Joelle Jesson – fortyish, fired from her job and desperate to act on her desires – is at a loose end after losing her position as an editor at a leading US publishing house. Apart from wanting to kill someone – and nearly anyone will do – she has no plans for her future. When the man who has just fired her keels over in his office without a readily apparent cause of death, she is shocked, like everyone else in the company, and for a moment feels guilty for wishing a death into being. She is not the killer, however, and a preliminary investigation concludes that the man died of natural causes. No one else but Joelle continues to suspect foul play.

Enter the dead man’s brother, an intriguing visual artist who has lived in the shadow of his more successful and famous sibling; a cop who has a manuscript with an uncanny storyline – which resembles recent events – that he wants Joelle to have a look at; a frightened, mysterious young man with a dark secret; and a wannabe writer who has a screw or two loose and does not understand why his “genius” goes unnoticed. I bet you that you will never guess where any of it is heading, and by the time you reach the book’s end, you will love every twist and turn that led you there.

Leaving word is a novel about characters and ideas; it playfully defies the realities of plots. As Joelle’s terminally ill ex tells her on the phone from Cape Town: “Your life does not have a readership demanding a resolution.” Like with editing, the devil is in the detail, and Sidley is a fine observer of human foibles. The story unfolds in unexpected ways, but its emotional fabric remains believable throughout.

The novel includes one of the most crushing rejection letters ever written and many lines of description and dialogue that will have you in stitches. It offers fascinating insight into a dying art – editing – and the industry that is killing it instead of treasuring it for what it can contribute to the wealth of our knowledge and the joys of our entertainment.

The rejection letter mentioned above begins with the obvious lines (I won’t spoil the rest for you): “We are not going to publish this novel. No one reads books anymore.” All I hope is that novels like Leaving word continue to find their paths into the world, and that we readers do our damnedest not to allow the art of reading to go completely out of fashion. The alternative is that a few of us will be left with inconsolable grief, the kind Joelle’s father lives with after losing his wife early on in their marriage when Joelle and her sister were still children: “A man who can recover from the loss of this sort of love, in my opinion, never had it in the first place – it was not his to lose. It is a rare thing. It is the fuel of poetry and art and life itself.”