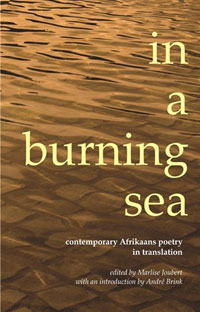 Buy In a burning sea from kalahari.com

The trouble with translation is, of course, that besides the search for linguistic equivalents, there are a myriad other factors involved: an author’s intention, a translator’s subjective interpretation, cultural background and transfer, target audience, stylistic considerations, the conversion of the phonetic sensation on the tongue of one language into another, which might create an altogether different vocal and aural experience. And then there is the preservation of heterogeneity when translating into a globalised language such as English. How, for example, is it possible to retain the many different idiolects and dialects when translating poetry – arguably the most difficult type of translation – from Afrikaans into English?

These were some of the considerations I had in mind when I started reading In a burning sea, a collection of “contemporary poetry in Afrikaans” which includes “authors who brought out new volumes in the course of the past five years” (p 18). The intention of editor Marlise Joubert was to compile an anthology for local and international audiences which reflects the current trends and issues in Afrikaans poetry; one which would do away with the stereotypes created as a result of apartheid. In most cases, the poets were paired with translators, but some of the poetry is self-translated by renowned authors such as Breyten Breytenbach, Antjie Krog and Marlene van Niekerk.

Of self-translation, author and self-translator Raymond Federman (1993) says that the second text “often augments, enriches, and even embellishes the original text ... This is so because the self-translator can take liberties with his own work since it belongs to him”. Breyten Breytenbach, for example, translates his own poetry and we see this kind of liberty when he translates the title of one poem “[hoe vaak was ons hier]” as “IN A BURNING SEA” (pp 52–53). While both titles are striking and the burning sea image links to the last line of the poems (“in ’n brandende see/in a burning sea”) the entire impression of “vaak”, along with all of its conceptual grids, are lost in the title as well as in the first line of the poem. The line “hoe vaak was ons hier tussen koeltes op die vloer” becomes “how often we were wrapped in coolness on the floor”. Die vertaling val plat/The translation falls flat. A more direct translation would read something like this: How sleepily were we nested here in the coolness of the floor. Sleepily, dreamily, drowsily, wearily: the omission of one word – “vaak” – strips the English translation of a whole semantic web embedded in the Afrikaans poem. It is this kind of loss that I often encounter when reading self-translated Breytenbach poetry. To state it metaphorically, it is almost as if he loses his soul. I encountered this same kind of loss some years back when reading his poem, “drome is ook woorde”, and the self-translation thereof, “dreams are wounds as well”. A couple of months later I discovered this same poem translated by André Brink (“Dreams are also wounds”) which, like Breytenbach’s Afrikaans poetry, takes flight. Perhaps a reader who does not understand Afrikaans would experience Breytenbach’s translations differently because, as Walter Benjamin (2012:75) stated, the only sufficient reason for “saying ‘the same thing’ over again” is that translations are meant for readers who do not understand the original. There is certainly some merit to this claim, but reading Marlene van Niekerk’s self-translations of poems from her most recent compilation Kaar, I found it impossible to fault her. Consider the lines “Ek sluit my lede sodat niemand jou sien, ’n lied/wat ek nie eet nie tussen my tande” translated as “I close my eyes so that nobody sees you, a song unswallowed between my teeth” (pp 294–295). The metaphor of not eating a song – so viscerally present in the mouth with the pronunciation of the strong Afrikaans plosive at the end of the word “eet” – is held, in the translation, in that very same position of the plosive with the word “unswallowed” which, like a plosive, presses with bated breath against the bridge dividing the hard palate and the velum.

The anthology also includes older generation poets, such as TT Cloete, MM Walters, Wilma Stockenström, Petra Müller and Lina Spies, and though all of these poets are noteworthy in their own right, it was especially the feminist slant and “muted eroticism” (p 18), as André Brink aptly terms it, in the poetry of Spies which caught my attention. To Anne Sexton (& Co) she writes: “en pa’s van mooi, slim dogters/maak hul vir sterwe groot:/na hom verwek elke man haar tot die dood”, which is beautifully translated by Johann de Lange as “and the fathers of beautiful, brainy daughters/raise them for death:/after him each man begets in her more death” (pp 256–257). But the pubescent eroticism in the first line of “Jong dogtertjie/Young girl” (a response to Elizabeth Eybers’s poem “Young boy”) once again highlights the difficulty of translation. For how does one translate the characteristic diminutive of Afrikaans into English? How can anyone successfully capture the image of the young woman’s “heuninglyfie” (p 260)? De Lange’s translation “honeyed body” (p 261) – devoid of the half-formed imagery contained in the ‘ie’-suffix – will have to do.

This generation’s poetry “blends into the next” (p 19), with familiar names such as Marlise Joubert, Cas Vos, Zandra Bezuidenhout, Martjie Bosman and Fanie Olivier. Bezuidenhout is the first poet found in the collection (the others follow alphabetically) and her “FALLIESE VROU/PHALLIC FEMALE” makes a marked impression with its androgynous imaginings. Translated by Michiel Heyns, the reader is transported to take a journey with a woman: “… a feral one/who runs with the wolves”. But, like much of Heyns’s translations, it is hit-and-miss. Consider, for example, the translation of the line “’n Tong swel blink en pers” as “Her tongue takes on a purple gloss”. Lost is the image of the word “swel”; the grotesqueness of a swelling, deforming, distorting purple tongue. And this grotesqueness is important because it signals a central excess of much feminist literature (see for example Rosi Braidotti’s 1997 article “Mothers, monsters, and machines”); one which really should not be subdued or omitted (A tongue swells into a purple glow). I am sure Heyns had his reasons though, which makes me think of Maria Tymoczko’s (2006:22) explanation of the term fan yi, described as analogous to Chinese embroidery. Thus, “if the source text is the front side of an embroidered work, the target text can be thought of as the back side of the same piece”. And like Chinese embroidery, the reverse typically “has hanging threads, loose ends, and even variations in patterning from the front”. This, for me, is the only fitting description of translation. But how, in between hanging threads, variegated stitching and shifting hues, can the heterogeneity of one language, Afrikaans in this case, be retained in an assimilating one such as English?

This is an important aspect of translation as it also touches on the preservation of culture. Towards this end, one thing that In a burning sea does get right, is the inclusion of non-white Afrikaans-speaking poets. Specifically the poems of Ronelda S Kamfer stand out as they include mixed-race colloquial lexicon and typical code switching between Afrikaans and English. In her poem, “Goeie meisies”, she writes: “Goeie meisies join nie gangs nie/hulle raakie pregnant op dertien nie/hulle dra nie tjappies nie/hulle roekie weed nie/hulle tik nie/hulle djol nie saam met taxi drivers nie/hulle werk nie vir Shoprite nie/hulle is nie die cleaners nie/goeie meisies bly nie oppie Cape flats nie.” In translation, however, you would never guess that the author is subverting standard Afrikaans as the English reflects none of this nuance. It is here that Carli Coetzee’s (2013) notion of accentedness becomes particularly important. In Accented futures, she argues convincingly against translation as we currently know it and instead argues for accentedness which allows for “a specific, even ‘local’, orientation or field of reference” (Coetzee 2013:3) and which, unlike contemporary translation practices, is “in defence of difficulty, of failure and of misunderstanding” (Coetzee 2013: 167). If translation negates such a struggle, the structural visibility of writers on the periphery remains just that: peripheral. At the same time, it further entrenches existing power relations and formations, including the homogenising anglocentric ascendancy in translation practices.