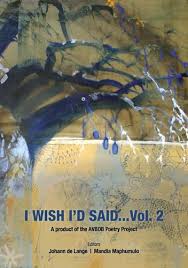 Having experienced a life-changing loss in the last few years, I understand the power of the written word to bring relief to you when you are grieving for a loved one, and so I was intrigued to receive a copy of I wish I'd said: Volume 2 for reviewing. But I was also apprehensive, because I feared that some poems could be triggering. And, indeed, I did find myself in tears quite a lot. In awe, too.

The anthology is published as part of the AVBOB Poetry Project, now in its third cycle of judging. The new winners will be announced later this year. Last year's top four in all official local languages were published alongside commissioned poems in I wish I'd said: Volume 2. "Through its continued sponsorship," the book's blurb says, "AVBOB signals its commitment to providing and sustaining bereavement support for speakers of all eleven languages." All the non-English poems included in the anthology were translated into English, either by the poets themselves or by appointed translators. Both versions of all such poems feature in the book.

To me, the anthology was a revelation. It achieves precisely the goal it sets out to: it consoles, enlightens, nourishes the grieving soul. Of all the excellent contributions to the book, the one poem I will never forget is "Spinach" by Maretha Maartens. It won fourth place in the Afrikaans language category:

I keep on doing what I ought to do with the waste water
even though now there's only one coffee mug
standing next to the kettle in the kitchen.
I water your spinach because the drought is dragging on.
… The spinach has gone to seed, degenerated. I live on bitter coffee and bread
with the drought and your absence dragging on.

What stopped me, my love, from looking up and just saying to you
how much I wanted to have many more years of spinach time with you?

A similar sentiment is captured in two exquisite lines of "Two images, after a call" by Nick Mulgrew: "The gentle go gentle. Even in daydreams you cannot wound,/ more the way you left your book unread; cold tea on the table." The same way these images of loss spoke directly to my innermost thoughts and feelings, there will be numerous others that each individual reader will find touching. Across the different languages, the poems illuminate the universality of grief. And we live in a time of worldwide loss, not only because of the threat to the welfare of the people we know and love, but because our entire way of being is changing on a seismic scale as we enter a period of global transformation and have to cope with the grief that goes with the gradual vanishing of security and vision.

A broken tree, a pillar falling, a mountain collapsing, loved ones going to sleep – these are metaphors often referring to our demise; a "human library" departing features in "It's time" by Moses Seletisha (second place winner in Sepedi), and life is described as a "paper fire" in "That's life, my child" by Nolusindiso Mali (original in Xhosa). I suspect that a lot of the beauty of many of the poems' original rhythms and imagery is lost in translation, but numerous sparks of uniqueness shine through the layers of various languages, as in this delicate line: "Sleep when wounded and accept," with which Neliswa "Sange.M" Sampi-Mxunyelwa ends the fourth-place contribution in the Xhosa category.

Consider also this image in Elphus Jaha Mhlanga's poem in Zulu: "We are grateful for you being the hoe/ That protected the blossoming seeds/ Of generations that will be the beneficiaries." I adore this tender line in "Love" by Serogane Tsotetsi (fourth place winner in Sesotho): "The warmth of his hands was like sheepskin in winter." And this one by Makodi Morwadi'a Mogale: "I am full of grief, I am being tainted with muddy soil" (from "I'm scared", originally written in Tswana).

"Poetry recognises our need for the ritual around dying and death. It enables us to talk about death when we have fallen silent or are at a loss for words, and it does so better than anything else," Johann de Lange writes in the introduction to the book. Death can silence us, as Mangaliso Buzani captures so beautifully in "The wind": "our father is stricken/ unable to speak/ he became a stutterer today/ some say he's heartbroken/ some say we didn't know/ that death can take one's voice" (original in Xhosa). The title of the anthology encapsulates the regret of silence. But the entire project creates "a cross-cultural platform of comfort and kinship", in the words of Frik Rademan, the CEO of AVBOB. The collection opens with "Last orders" by Clinton V du Plessis; its first stanza is an invitation: "If you feel lost, come in search of me/ in the place where we used to wander/ among the dear departed/ on Sunday afternoons" (original in Afrikaans). For many of us, that "place" is poetry.

Even though "mortal bodies are called to decay", in the words of Bigboy Bheki Gasa in "Our deepest condolences" (second place winner in Zulu), there is a strong sense that art can allow us an existence beyond death, as in Ann Scarborough Moore's third place winner in English, "Meeting Ingrid", in which the spirit of the Afrikaans poet, Ingrid Jonker, is invoked "in the stillness of the shadows/ as they crept to meet the sigh/ of the breathing tide, her spirit/ watched cold, dark waters rise." And there is the sense that we can live on in others: "a tattoo/ of my name across your heart/ is enough for me/ to never be forgotten" (fourth place winner in English, "The first step" by Retshepisitswe Makhatha). We continue in the legacies we leave behind, as S'fiso Oscar Zwelihle Mkhize shows us in "Body, sink, and soul, rise!": "Though you are dead, you old lady,/ Your teachings still flow like waterfalls" (original in Zulu). "You are sitting relaxed in my heart; Yes, your love is still glowing, even now," says Hluvukani Mashimbye in "When you have lost" (original in Tsonga).

Many of the poems reflect our need to address death as if "he" were a person. Interestingly, it never seems to be a "she", although Thamba Rabothata questions death's gender in "The bridge": "Are you classified as a male or a female/ or are you a hermaphrodite?" The poem's poetic persona makes death an unusually flirtatious offer: "Marry me and take me to my new home" (original in Venda). In "Our song", Thabi Nancy Mahamba (fourth place winner in Ndebele) accuses death directly that "your stomach is never full,/ You took my one and only!"

Death also features in the poems across the anthology as "the cruel hawk", "snake", "mind disturber", "greatest thief" and a "wolf" passing "like a cyclone". And, in Rialivhuwa Emmanuel Magoro's "Death" (third place winner in Venda) as well as in Mokgadi Matlakala's "They call me Death", death speaks to us directly and tells us in the latter poem that we "cannot stop Death" (original in Sepedi). Thabiso Leseba proposes, "If death were for sale/ I could have bought it long time ago," telling the Grim Reaper in return, "You are so cruel, your cruelty is deeply rooted" ("If death were to be sold", original in Sesotho).

Spirituality and tradition play a major role in coping with grief, and, not surprisingly, a large proportion of the collection addresses this aspect of loss. "God stays close to those who are heartbroken," writes Andile Ntuli in "We don't know what tomorrow holds" (original in Ndebele). But there is also practical advice, such as, "When you divide an inheritance, split it equally,/ Do not give one child more than the other,/ Because that may cause hatred among them" ("Inheritance" by Tieho Mkhendane, second place winner in Sesotho).

Children mourn their parents and grandparents, parents their children, spouses their other halves, but several poems mourn other losses, such as betrayal: "Just because lovers lie/ doesn't make love less real – or subtract/ its warm weight from the world.// Hemingway's exit is not for me:/ I'll drink to life in the afternoon" ("Absinthe afternoon" by Helen Moffett). Dineo Ntwayagae's poem, "The agony of not bearing a child", laments the unfulfilled dream of motherhood (third place winner in Tswana). Fourth place winner in Tswana, "Wake up and let's argue" by Pelonomi Itumeleng, chronicles the end of a relationship. In her poignant poem, "Death", Sindiwe Magona reminds us that "[l]iving a meaningless life is also death" and advocates for "[a] good life", one that "heals all on earth" (original in Xhosa). As if in response to Magona, the poetic "I" in Rebaone Talakasi's "Death" accuses the titular subject of the Tswana poem of taking "my love away", "[t]he one that gave my life meaning". In "A well-kept secret" by Musa Aubrey Baloyi (fourth place winner in Tsonga), we find the devastating appeal from beyond the grave by a victim of violence: "You who are still alive: cry out and be saved when the noose tightens."

The anthology ends with two stunning |Xam poems from the Bleek and Lloyd archive that in the original are already a marvel to feast one's eyes on, and include these moving lines: "Did ye not hear the / hammerkop, when the star fell / It came to tell/ us that our person is dead" ("Death" by Diä!kwain).

Once more, the hammerkop has arrived to tell us that many are dying all around us, and with them our reality as we knew it. As we stumble through this hiatus and mourn the lives we are leaving behind, may words of solace guide our way.