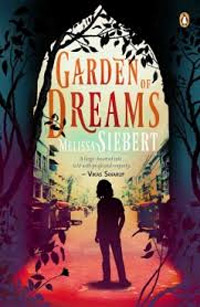 Buy a copy of Garden of Dreams at Kalahari.com

Melissa Siebert’s debut novel Garden of Dreams is the story of Eli de Villiers, a teenage wannabe rocker from Cape Town who travels to India with his mom Margo, a journalist. They explore the country on their way to Kathmandu, Nepal, where Eli is to visit his estranged father Anton, a world-renowned peacemaker. During their stay in Jaisalmer on the edge of the Thar Desert, Margo suddenly decides to abandon her son in the middle of the night to pursue a story on witchcraft allegations back home in Limpopo. She asks Badresh, the manager of the guesthouse where they are staying, to ensure that Eli is taken to the airport in Delhi to continue his journey north safely on his own. Margo’s staggeringly reckless decision (Eli is not even fourteen!) and blind trust in a complete stranger sends her son on a trip through the hell of child trafficking. He is kidnapped and taken to a brothel in the red-light district of Delhi, where he lands in the clutches of the vile Auntie Lakshmi, a lowlife criminal who develops a highly disturbing fascination with Eli. In the brothel Eli befriends some of the other children who are being drugged and raped for profit.

After he goes missing, Eli’s parents fly to India and seek the help of inspector VJ Gupta, one of the few cops around who are not in the pockets of the criminal world. Gupta, who roams the underworld of Delhi disguised as a cross-dresser to meet with his informants, tries to bring the perpetrators to justice. However, when the initial search for Eli proves fruitless, Anton returns to Nepal and Margo decides to disappear herself. While Anton still tries to enlist the help of some unlikely allies to find his son, Margo goes off to a faraway beach where she enters an abusive relationship with a drug addict who not only beats her but lures her into heroin.

In the meantime Eli and some of Auntie Lakshmi’s other captives manage to escape the brothel with the help of an unusual friend who pays dearly for the good deed. Together they embark on a danger-fraught trip back to their families. Eli’s plan is to assist them before continuing to Kathmandu to find his father.

This short outline of the story already hints at the major problem I had with Garden of Dreams. Almost from the start Siebert presents us with plot twists and character choices that are difficult to fathom. In real life, parents act irresponsibly all the time, children do stupid things, but if they behave like this in a story one wants to understand what leads to their actions. Also, we are surrounded by reports of parents searching for their missing children for years after their disappearance. Eli’s parents give up almost immediately: one returns to work and does continue with the search, but only because it coincides with his professional mission. The other completely loses the plot by checking out of the world and descending into her own little self-made hell where every decision she takes seems more ridiculous then the previous one. After his escape from the brothel, Eli also doesn’t consider the simplest solution of reaching his parents or any other help which could guarantee his safe return home. Instead he elects to trek to Kathmandu, not even knowing where his father is staying in the city.The feeble excuses given for his reasoning are unconvincing. Moreover, we are all aware that perversity and abuse of power come in all shapes and sizes, and yet I found Auntie Lakshmi and her henchmen to be mere caricatures of the kind of people they were supposed to portray: criminals involved in trafficking and prostitution. Inspector Gupta is also a flat character whose motives eluded me.

As the implausibility of the narrative mounted, I struggled to finish the novel. The margins of my copy of Garden of Dreams are full of comments of disbelief and outrage. The phrases “melodramatic”, “cringe” and “really?” feature prominently.

Child trafficking, child labour, abuse and rape are some of the most horrific crises we face in the world today. These are topics too important to be handled superficially. Siebert’s treatmentof them shies away from tackling the real issues. Despite Vikas Swarup’s over-generous endorsement of the novel as “a large-hearted tale … told with profound empathy”, Garden of Dreams lacks the psychological and emotional depth to do justice to any of them. Which is a great pity, because there is no doubt that Siebert has the stylistic ability to offer a more persuasive narrative.

Also read an interview with the author of Garden of Dreams.