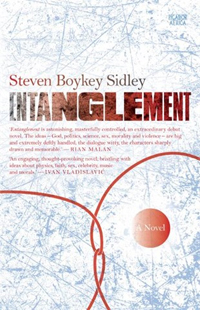 Professor Jared Borowitz, a renowned, well-liked American physicist in his mid-forties, has one pet hate: belief of any kind, whether it is spiritual, dietary or homoeopathic – as long as it is not founded on sound logic and scientific proof it won’t make it past his personal bullshit detector: “Aside from fundamentalists, creationists, UFO nuts and astrologists, health foodies are next in the pantheon of idiocy,” he attests. He used to be able to laugh off what he perceives as ignorance, but now it awakes a sense of rage in him.

A recovered philanderer, Jared is divorced from his first long-suffering wife, Gwen, and living in a relationship with Katherine, a no-nonsense psychologist with a strict moral core despite her damaged past. Having learned from bitter experience, Jared decides to be faithful to Katherine and sees a clear future with her at his side.

Jared ends the academic year on a reflective note and heads across the Atlantic to London, where his mentor, Derek Tomlinson, is dying. It is a heart-breaking goodbye which leaves Jared meditating on the nature of death and life. He confesses to his mentor: “I’ve lost my sense of patience with people, I seem to have lost my sense of humour as well. Science and art are the only things I care about.” He receives wise advice in return: “You have never realised that your role here is to be happy, not right. Do what makes you happy.” It is a lesson Gwen seemed to have learned before him, as he observes on a visit to his clearly blossoming ex-wife, her new gay partner and their child.

Wherever he goes, Jared is quick to strike up conversations or simply to observe human follies and to ponder the intricacies of our preoccupations with science, gender, citizenry, sex, celebrity culture, death, drugs, free will, money, violence and relationships – the stuff that life is made of. Eventually he finds himself in a tricky and volatile situation on the London underground when a gang of hooligans starts bullying the people around him. The scene explodes into violence with Jared at its centre as he heroically ambushes one of the attackers. He sees his reaction as one of the “finest achievements of his life”.

Jared and Katherine are friends with Ryan Venosa, a famous enfant terrible with a cult status in the literary community brought about by the success of his debut novel. Ryan introduces his latest flame, Tam Tam, a South African beauty of diverse origins, to them. Together with Clive, Katherine’s younger cousin, and his outrageously sexy girlfriend Barbara, the six decide to go away for a few days about halfway through Entanglement: “We shall eat, drink and argue with each other, and kill boars with our bare hands. We shall read many books and not covet each other’s partners. We shall not partake of drugs, at least in public. We shall bathe at least once a day. The only topic off limits shall be paranormal events. And health food. And god. And celebrities. And homeopathy. And who really blew up the World Trade Centre.”

They flirt, drink, play games, talk sense and nonsense, and at least one of them falls spectacularly to the temptations on offer. On a hiking outing they go skinny dipping in the woods. Everything in the novel builds up to the moment when the naked Barbara, flaunting “the poisoned chalice of her beauty and sexuality”, attracts the attention of a stranger. When the group accidently meets up with the voyeur in the bar that very same evening, everything begins to spin lethally out of control.

Jared is a reader, but he is interested only in male authors such as Ian McEwan, Philip Roth and Martin Amis, whom he describes as “stout-hearted novelists of courage and ear-splitting ideas, who will roar and bellow and whimper and plead when necessary, where plot is sometimes secondary to texture or language or author’s commentary”. He also observes that the trouble with the universe is that “it has tricks and unpleasant surprises and irritating little quirks, and refuses to be ordered.” He comments on their own bizarre situation: “If he were plotting this, he would have someone die. Readers need some death.”

These three quotes sum up Entanglement for me, and strangely pre-empt the kind of criticism that I would like to level at the novel. Entanglement is rich in ideas and insights, but its somehow disjointed plot takes away from the impact of an otherwise stimulating read. It is almost as if the narrative was just a vehicle for showcasing a few clever turns of phrase, delivering a good punchline or two, and accumulating funny anecdotes on the way to a strangely unsatisfying conclusion. The author is not intimidated by big issues, but the novel lacks the kind of smooth synthesis of idea and narrative execution that McEwan showcases in Solar or Philip Roth in The Dying Animal, to name only two examples. Sidley’s protagonist is right that the universe refuses to be ordered, but a story is a universe of its own kind. When you violate its order, it has to be for a damn good reason. You have to know exactly what you are doing. Otherwise the experiment has the potential of falling flat on its face.

Sidley doesn’t entirely escape this particular trap. There is something deflating about the last pages of Entanglement, despite the violent death which occurs at the end. It’s not that readers necessarily need death, but if there is one in a novel, a less predictable and gratifying one could go a long way.