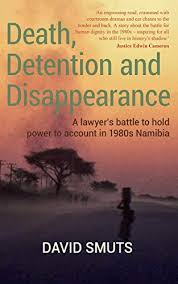 There is little to suggest the timely relevance of David Smuts’s new book, Death, detention and disappearance – a lawyer’s battle to hold power to account in 1980s Namibia, from the cover of this new work of non-fiction. But, as Namibia holds its sixth national election, there can be no doubt of its supreme importance.

It could not be otherwise from a man who has been a judge in the Supreme Court of Namibia since 2010, who studied law at Stellenbosch University and graduated from Harvard Law School, and whose numerous accomplishments include cofounding The Namibian newspaper and establishing the country’s first public law firm, the Legal Assistance Centre (LAC).

The book’s premise is simple enough. The 1980s in Namibia represented a dark decade of human rights abuses by South African security forces. Smuts, practising as a young Windhoek lawyer, was finally able to take on the system – a desire he’d developed even as a teenager. The story focuses on several dramatic cases, including the freeing of detainees held secretly for six years; proving that torture was used to extract “confessions”; and proving that the paramilitary police unit called Koevoet knowingly killed citizens. Even lawyers became targets.

The challenges to the few who dared oppose the state in these cases were considerable. “The sheer volume of work had become overwhelming by the mid-1980s,” he writes; “… there were also no lawyers in full-time practice north of Tsumeb, where more than half the population of the country lived. And those lawyers in Tsumeb, like most of their counterparts elsewhere, were not prepared to take on human rights work – and, in most cases, were openly hostile to it.”

And so, the story unfolds.

If it’s not clear enough yet, this is not a book exclusively about the Namibian experience. Many names and events highlighted in the book will be familiar to South Africans of those years. Many of the people involved were key players in South Africa’s own liberation struggle, too. Death, detention and disappearance makes an invaluable contribution to our perspective, both historical and on abusive power everywhere.

The book’s structure and conclusion (more about that later) give the book the feeling of legal argument – stories are told, in layman’s language, with intent. There are no broad strokes in this retelling of historic cases, and Smuts has been meticulous in going back to the details of events.

This time round, he is not a participant, but our guide to proceedings. He allows himself the empathetic voice, and he succeeds masterfully in making the point that above all, law is about people. He shows how it is ultimately the choices and actions of individuals that set off chain reactions that can lead to both hell and redemption.

He writes: “Few … received recognition for their fearless contributions after independence. They have my abiding respect, undiminished by the passage of time, which has been a motivating factor for writing this book – out of respect for their selfless contributions in showing how the law was used and abused during those years.”

And, from this reflection, the author brings us to the present, where Swapo, the organisation that led the country to independence and has remained in power for three decades, still holds sway. In its dying pages, the book reminds us that many scars remain. He writes:

As part of the policy of national [post-independence] reconciliation, it was made clear that there would be no prosecutions for abuses by either side in  the conflict ...

There was nonetheless a compelling need for some form of accountability. Past abuses needed to be investigated so that victims and their families could obtain the truth about what had happened and those involved in gross human rights abuses could be identified and sanctioned, even if no prosecutions were to take place.

Unfortunately, there was no commission or investigation into past abuses – not even a limited one ... Instead, the wound caused by these abuses has continued to fester. Families have not been able to obtain any form of closure. Gross abusers of human rights have continued to hold office …

The failure of any form of accountability whatsoever for past abuses on both sides remains a blot that tarnishes Namibia’s human rights record.

From the reader’s perspective, a repetition of facts here and there briefly mars rhythm and gives the sense that chapters may have been compiled separately and over a protracted period. This is perhaps to be expected of tales that involve untangling the salient details of a story from the chaotic jumble that daily life must have been in the trenches all those years ago.

Overall, Death, detention and disappearance is an engrossing, enjoyable and insightful read from start to finish. Whether from the outrage at injustice, the heroism of ordinary people, or the sadness of the loss of it all, you will be moved.