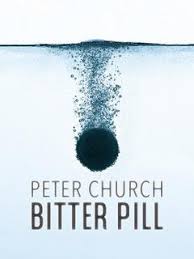 Bitter pill is a cat-and-mouse thriller that continues the series about Dark Video, a secretive online service selling illegal material to an exclusive, influential and wealthy clientele.

This time, the story revolves around the topic of drink-spiking in the night-time hangouts of Cape Town’s Southern Suburbs, and draws in the protagonists of, among others, middle-class UCT students; a Dark Video client in a crumbling Bishopscourt mansion; and a few characters from local police.

It begins with a young woman whose drink is spiked while out on the town with friends. As she’s transported from the venue barely conscious, she’s aware of an altercation. It becomes evident there are multiple hyenas competing for unsuspecting prey. It also becomes clear that these are organised and well-funded outfits with extensive networks that, like the serpentine heads of the Hydra, easily replicate. The network is layered, intentionally armed with very limited knowledge of the others. They're also ruthless.

Dark Video’s founder, Carlos, senses a competitor moving in on his turf, but is it paranoia or reality? He religiously replaces his computer and operates through a maze of online proxies. Not even Jacker, his security whiz kid, knows his location.

At the same time, Carlos must manage the demands (and payments) of his customers, but particularly the escalating urges from a specific and profitable customer in Cape Town. Not satisfied with random deliveries of drugged women anymore, the customer, Julian Lynch, spots a woman in a video and wants her. His depravity has also intensified.

The story shoots between various locations: the online pursuit of anonymity by the US-based video-on-demand business, its agents, enforcers and competitors; the bars and student residences around Rondebosch; and a holiday house in Plettenberg Bay.

It is a world Church knows well, being based in Cape Town and having had a career in IT before turning to writing.

Bitter pill is a book built for speed. The chapters are short and the events fast paced. Church has a great handle on tension and escalation, on dialogue, the story and its protagonists. These pull together and keep you engaged.

The topics are familiar too; they’re grounded in the newspaper headlines and stories we encounter everywhere.

The author’s first novel, titled Dark Video, was published in 2008. Bitter pill followed three years later and was longlisted for the Sunday Times Literary Awards. It changed publishers before this second run for 2019, now undertaken by an apparently cross-Atlantic enterprise called Catalyst Press. The latter also promotes another of Church’s thrillers, titled Crackerjack.

Now, given the length of time since the first edition of Bitter pill, one would have expected fewer editorial glitches, but some doggedly remain. Additionally, the story feels hobbled in the first half because of, among others, unnecessary repetition, the occasional cliché and the incessant branding. But once it gets going, the story flies.

Readers might be a little disappointed if this is the book in the series they start with. Best begin with the first, of course. Bitter pill doesn’t rest entirely on the backstory, but one still gets the occasional sense of being in a conversation where you don’t have all the information.

Nevertheless, Bitter pill is an enjoyable read and will surely have readers baying for more.