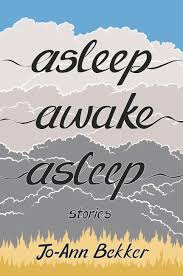 When I opened Jo-Ann Bekker’s debut collection of short stories, Asleep Awake Asleep, I immediately remembered encountering the first story in the book in its previous incarnation when it was considered for the Short.Sharp.Stories Award. Opening with the following paragraph, it is a story that is not easily forgotten: “The dolphins left a chocolate in the fridge. I tear open the stapled wrapper and finish it in two bites. Crumbly, with chewy bits.” I also recalled thinking that I wanted to read more work by the story’s author. Thus, Asleep Awake Asleep was eagerly devoured and the other stories included did not disappoint.

Bekker has a fascinating voice and she is not afraid to experiment with the short form. The individual pieces in this book range from flash fiction, arresting specific moments and moods, to interlinked tales, which record a life story. As a whole, it could be read as a short-story novel. The stories portray the loss of childhood’s innocence; personal and professional awakenings; the entanglements of trust, betrayal and transgression; marriage, motherhood and other familial relationships; and the newsroom – everything unfolding against the background of the turbulent history of South Africa’s (post)apartheid years.

Bekker’s background is in journalism. She only turned to fiction writing less than a decade ago, but thematically and stylistically her stories are definitely influenced by her previous career in the best possible way, sporting a crisp prose that has the ability to transport you in time and place and allow you to immerse yourself into the lives of the characters she portrays. Just see how two women’s portraits are drawn in one short paragraph of “The stalwart”: “I waited for this stalwart with her muscular mind to say the things I was ignoring. What about your career? Are you going to give up your dreams to follow a man? Can we call you if we hear of human rights abuses there? At least keep a journal. But she looked at me and said: Look after your skin. Wear sunscreen every day.”

Bekker also repeatedly draws the line where journalism and creative writing diverge as, for example, in “Helen and the mountain”: “This is not a news report. I do not need to begin by explaining who-what-where-when. I could start with Jack, the first time I met him… Still, I’d rather start with Rosie.” The ability to recollect and record reality is thematised in stories like “I was wearing jeans”, in which a traumatised woman is unsure about many of her memories, including the events leading up to her “walking back home and feeling like something wasn’t right” after she’d clearly been drugged and assaulted. The inability to remember and articulate the trauma is countered by the power of the narrative.

In “Starlings” two friends climb up to the attic where they find newly-hatched starlings: “And you know you shouldn’t touch them, they’re too young, but your friend takes a chick in each hand, crawls to the attic window and throws them down to the yard below. Throws them hard and they make red marks on the concrete.” When asked about the reason for this cruel act, the friend explains that “birds bring lice and rats into the dairy and chucks another one out through the window.” The one-paragraph story encapsulates the helplessness of witnessing violence that is beyond comprehension, evoking outrage in the reader and setting the tone for several other stories in the collection.

Stories like “Carousel” and “Fallacies” – the latter begins with the sentence “You must choose whom to betray” – relate to the dilemma of professional trust and treachery for a journalist in times of political instability when one’s integrity is challenged by historical forces seemingly beyond one’s control. And, as always, the political is intertwined with the deeply personal, as for example in “Contractions” when Rip, the protagonist of many of these stories, gives birth to a baby: “A bundle with eyes that looked straight at Rip, with a mouth that clamped around her nipple. Nothing else mattered. Everything else was peripheral: Jay, his parents, doctors, nurses, friends, flowers, fruit, radio news reports, newspaper headlines about reconciliation, magazines screaming about genocide There are no devils left in hell.” At the end of the day, there is the understanding that “I’ll never have the same shared history with anyone” (“The Good Housekeeping magazine quiz”), and yet the lives depicted in these pages will resonate with many readers because of the raw honesty with which they have been captured by the author.