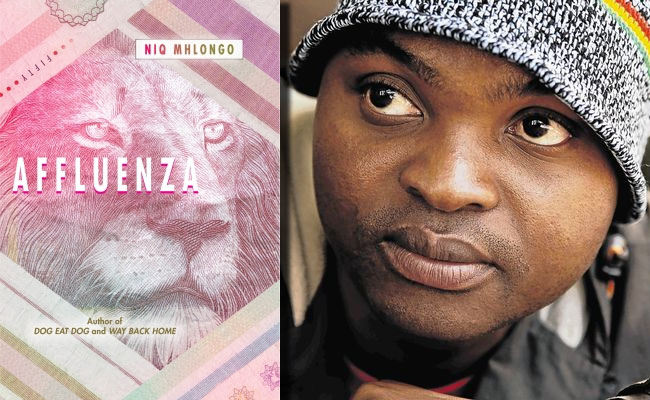 Every new book by Niq Mhlongo is literature to my ears. His three novels, Dog eat dog (2004), After tears (2007) and Way back home (2013), were fresh, gritty and not to be ignored. Reading them in sequence you witness a writer coming into his own, developing an unmistakably individual voice that captures a historical moment like no other. That moment for Mhlongo is now. If you want to take the pulse of present-day South Africa, you can turn to his work for insight.

Dog eat dog encapsulates the lives of a group of Wits students at the time of the first democratic elections. After tears describes the challenges and disillusionments of their generation after graduation. In Way back home the characters have seemingly made it, but their lives are haunted by greed, corruption and ghosts from their past. Never afraid to tell it like it is, Mhlongo offers a brutally honest glance into contemporary South Africa.

In his first short-story collection, Affluenza, he continues in this vein, but at the same time the writing is even grittier. Four of the eleven stories were published before. The topics range from farm murder, suicide, and paternity to animal attacks in a game park. Mhlongo does not shy away from difficult discussions surrounding the issues of race, gender, sexuality or class, pointing to the horrendous levels of miscommunication arising when people approach one another with bigotry.

Two couples experience more than just the excitement of encountering the big five on a game drive in “Betrayal in the wilderness”. In the opening scene of “The dark end of our street” a young man jumps to his death. His university friend from the same residence attempts to comprehend the fatal step. He finds a shocking letter that explains the heart-wrenching decision.

In “The warning sign” prejudice and violence escalate when a white farmer is visited by members of a land redistribution committee. Workers keep disappearing from the farm under mysterious circumstances, while others reach their breaking point and revolt.

Before a bachelor party, two friends end up in a deadly situation when they meet three alluring women at a bar in the titular story, “Affluenza”: “This is Johussleburg and everyone here is suffering from affluenza. Almost every black person pretends to be rich while staying in a rented room. Didn’t he just pay for the ladies’ expensive drinks with his credit card when he already skipped two instalments on his car? Who was he to judge?”

In the last and longest story of the collection, “Passport and dreadlocks”, it is unclear who is about to exploit whom when a group of Jozi men decide to save up for a holiday at the Victoria Falls, where they can pick up and sponge off rich white women: “We’ll go hunting for white women, or they will be hunting for us.” To get to Zimbabwe, one of them has to travel on a fake passport because his is stolen along with his dreadlocks (a magnet for white women, they believe) before the trip. Prejudices abound, the stalking of “prey” begins, and when it all goes horribly wrong, no one is willing to take the fall.

Negotiating traditions and dealing with family responsibilities feature strongly in some of the stories. A father of three accuses his partner of being unfaithful in “Goliwood drama”. He insists on a paternity test before paying maintenance for the youngest child. The court’s findings in his case are not what he expects. Another man is tricked into fatherhood by his mentally ill wife in “The baby shower”. When their baby is allegedly stolen, he discovers the truth about his son’s origins. A gullible woman is seduced by a womaniser of note in “My name is Peaches”, but she discovers her fate only when it is far too late to escape the dire consequences of her careless actions.

In “Catching the sun” the family of a sculptor is plagued by foreboding signs. Then, strangers arrive at their house to announce the passing of their daughter Mpho. Unbeknown to them, Mpho had not only been living in a relationship with a man but had given birth to his child before dying in a car accident. The partner’s family deliver the terrible news and try to assist with the burial arrangements as well as lobola payments in the wake of the tragedy. But it is nearly impossible to navigate through the labyrinth of superstitions and traditions both families abide by, especially when other calamities follow and people need to find explanation for these occurrences. A strange tragicomedy of errors ensues. Money changes hands, blame is attributed, and consciences are cleared, but only greed wins in the end.

“Four blocks away” had me chuckling most of the way. On cultural exchange in Washington DC at the time of Barack Obama’s election, a gumboot dancer is desperate to spend the night with a woman he encounters there. She is more than willing, and her rules of engagement are simple: “No glove, no love.” The eager lover dashes out into the night to procure condoms. After a series of misfortunate incidents and misunderstandings which nearly get him arrested he returns to the hotel where the woman is waiting, only to be confronted with another twist in his quest.

Another gumboot dancer tries to pick up a woman during a trip to Mauritius in “The gumboot dancer”. In order to get her attention he is willing to lie shamelessly about his friend Kabelo’s sexual preferences and to tolerate the hateful homophobic nonsense which continues spilling from the woman’s mouth: “I still found her excitingly desirable even after all she had said.”

These everyday encounters between families, friends or strangers are plucked out of the ordinary and portray a society in crisis. We live in interesting times that make for interesting stories. Whether it is a blessing or a curse for contemporary writers, history will decide. In the meantime, it is reassuring to know that affluenza going viral does not go unnoticed and that the next generation of writers is willing to engage with the sicknesses afflicting our present.

Despite its light laugh-out-aloud moments, like all of Mhlongo’s previous books Affluenza is not a comfortable read, but it is one of those that should not be missed if you want to understand what is at stake in today’s South Africa. 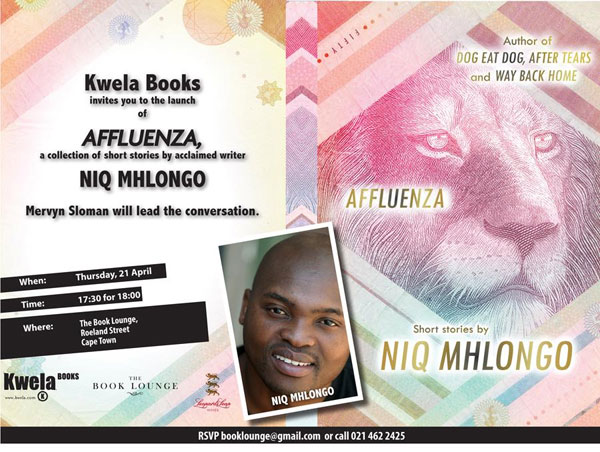