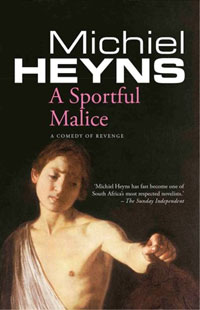 Buy A Sportful Malice from Kalahari.com

A Sportful Malice is a very funny book, fully accomplishing its subtitle “A Comedy of Revenge”. Michael Marcucci, a South African literary scholar, encounters a number of strange characters as he departs from Cambridge on his way to Gianocini, a small Italian village where he had rented a house to be able to complete his study of “Literary Representations of Tuscany”. Upon arrival in Italy he becomes increasingly unnerved as these characters start reappearing in his life in a sequence of actions which drive the story through to its thoroughly satisfying conclusion.

This is Michiel Heyns’s seventh novel, a return to the comic mode previously displayed in The Reluctant Passenger – an approach very different from his acclaimed Lost Ground. While the subject matter might be less significant, there is no doubting Heyns’s masterful control of the variations in tone – always entertaining, steadily ironic, light-heartedly satirical, and very amusing. There is a lightness of touch that allows you to read at a brisk pace (except when you have to stop reading to catch your breath from laughing out loud).

The characters that surround Michael are initially presented almost as caricatures. They are stereotypes – the coarse, uncouth, uneducated bouncer, the “bovver boy”; the elderly man who jumps the queue at Stansted Airport, with the “unironed looks of a long-time bachelor”, whose “slovenly shabbiness” is matched by a corresponding “lack of regard for decorum”; and the upright, uptight English lady with a voice like a diamond on cut glass. Heyns develops these stock characters by filling them to the brim with vigour and unexpected capacities. The bouncer, for all his crudeness of language and opinion, is developed as a voice with more than enough insight to satirise Michael’s pretensions and affectations. When Michael encounters the old man and the old woman in Gianocini, they turn out to be artists with definite, albeit eccentric, views on art and life, yet their arguments about art seem more authentic than Michael’s pretentiousness.

This is a modern epistolary novel, and the story unfolds through the 12 e-mails from Michael to his Johannesburg-based partner J, and then one e-mail from one of the other characters. We are not given sight of J’s replies, but Michael does refer in passing to some of his partner’s reactions. We as readers know there is an addressed reader who is a part of the story, but we enjoy the excitement of eavesdropping on that correspondence, even though we are also aware that Michael is deliberately “writing up” his experiences for effect. But there is one e-mail, which comes unexpectedly from somebody else in the story, which sets up the resolution of the revenge tale. Introducing the e-mail from the other character is a very neat way of signaling a change of point of view, which allows the unexpected but nonetheless inevitable ending.

The high points of comedy and satire are in the dialogue, especially the extended conversations in which Michael unwittingly reveals his pretentions and shallowness. For example, in the encounter between Michael and Cedric (the bouncer) on the airplane from England to Italy, Michael turns out to be no match for Cedric’s single-mindedness, where he articulates ideas which are totally at odds with Michael’s and for which Michael is unable to provide any sort of assured answer. Other extended discussions, such as those between Michael and the old man and woman that he meets up with again in Gianocini, or the exchange between Michael and Angela, provide Heyns with the platform to satirise the diction and rhetoric of “‘arty” discourse. Amusing as these exchanges are, the quality of Michael’s self-conscious and self-satisfied reflections are also continually amusing.

The resolution is hugely satisfying. It would be a spoiler to reveal the details, but they are very satisfying. Revenge is a dish best served up cold, as Talleyrand is reputed to have said, and the nature of the revenge is exquisitely appropriate.