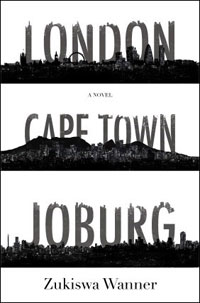 With its sprawling title, London Cape Town Johannesburg gives the reader a sense of the spatial trajectory or fictional itinerary that is to follow. What the title does not prepare the reader for, however, is a startlingly insightful and incisive portrait of the returning exile one, where the world imagined and the world as it appears from up close do not necessarily align.

Wanner writes with ease and purpose about the personal and the political and the myriad ways in which the two ineluctably intersect, revealing the fault lines between heritage, family, tradition and culture. What ultimately emerges is an intense and absorbing journey that snakes insidiously from the promise of new love and the brimming potential of a post-democratic society in South Africa to the disenchanted realities of coping with the death of a teenage son, and a country in seemingly interminable transition to a better life for all.

With this broad skeleton in place, some further specifics should suffice: Wanner’s novel has at its centre the dynamic relationship between the beautiful ceramicist Germaine Spencer, a woman with her fair share of stepfamily, and the mixed-race black man Martin O’Malley, who has an MSC from the London School of economics and carries his father’s Irish surname. The novel tracks their relationship, and the various men and women that form part of their lives, over the course of roughly 17 years, between 1994 and 2011, from their fortuitous meeting in London to the shocking suicide of their son, Zuko, at their home in Johannesburg.

What such a timeline allows for is a lovely parallel between the lives of a group of individuals and the character (as the novel’s subjects find it) of the major cities they spend time living in. Wanner gets to question what home really means, is able to interrogate notions of democracy, freedom, schizophrenic divides between rich and poor, rural and urban, and the ways in which the fall of apartheid and the democratisation of post-apartheid South Africa has brought many possibly unforeseen challenges and opportunities to the fore.

Wanner bravely gives scope to her two main characters, Martin and Germaine, and later also Zuko, writing in diary form, to tell their side of the story. While I found both Germaine and Martin to be strongly rendered, full-bodied characters with actions and speech all of their own, the first hundred pages (roughly) of the novel are, at times, little more than the chronicle of their budding relationship, soon in full bloom. The characters do have some very entertaining back-and-forths and their interaction is well written, but Martin’s voice is not as masculine or well-developed as it might have been, and their infatuation with each other can get a bit much after a while. I make this point because this section need not have been this detailed or this long, since the sections set in Cape Town and Johannesburg have arguably more punch, and are more dramatic and varied. Wanner is also particularly good here in showing the dissolution of a happy marriage over time, where the currency of political clout and racial “understanding” conspire to derail even the most innocent of exchanges between intimates.

While the different focalisers certainly allow for variation, a shift in tempo and different perspectives on the same events to emerge, what struck me most was how incredibly well Wanner was able to forge ahead with the voice of Zuko, whose name, most ironically, means “child of glory”. On an affective level, these diary entries offer intensely personal, subjective reflections of a boy that is well-to-do, yet torn between different influential figures. On a more metatextual level, once could read Zuko as the sacrificial lamb in the greater narrative of hope, redemption and suffering, a tragic figure that warns of the dangers and potentially fatal cost of letting the new big dogs run rampant.

One of these big dogs in the novel, and without a doubt one of the most Machiavellian figures I can recall in recent South African literature, is Martin’s brother Liam, an increasingly bewildering, staunch Party man who repeatedly asserts his support for President Zuma. Liam is such a disconcerting figure because of the impact he has on the lives of Martin, Germaine and Zuko, but readers will have to read the novel if they want to know why this man gets under the skin to such a degree.

Another key plot development quite late in the novel sees the introduction of Martin’s absent father, who deepens the role of capital in Martin’s life, and who introduces another form of corruption into a novel awash with subtle or explicit examples of the capillary actions of power.

Suffice to say, the death of Zuko is a key event in the narrative economy, one that frames the text. Readers should thus prepare themselves for a see-sawing narrative that is uncompromisingly realistic and gut-wrenching when need be. The novel is all the better for its ability, particularly in the second half, to shift gears, to veer between cutting portrayals of betrayal and disillusionment and the chutzpah of those that take advantage of apparent loopholes in the system.

London Cape Town Johannesburg, despite my minor quibbles with a meandering opening act, is a beautifully written, truly powerful and perceptive work of art, the perfect read for those that seek intelligence and perspicacity from their fiction.